I got some cool explosion effects recently. I’m really getting into the idea of making my collection display more into dioramas. It’s so much fun! 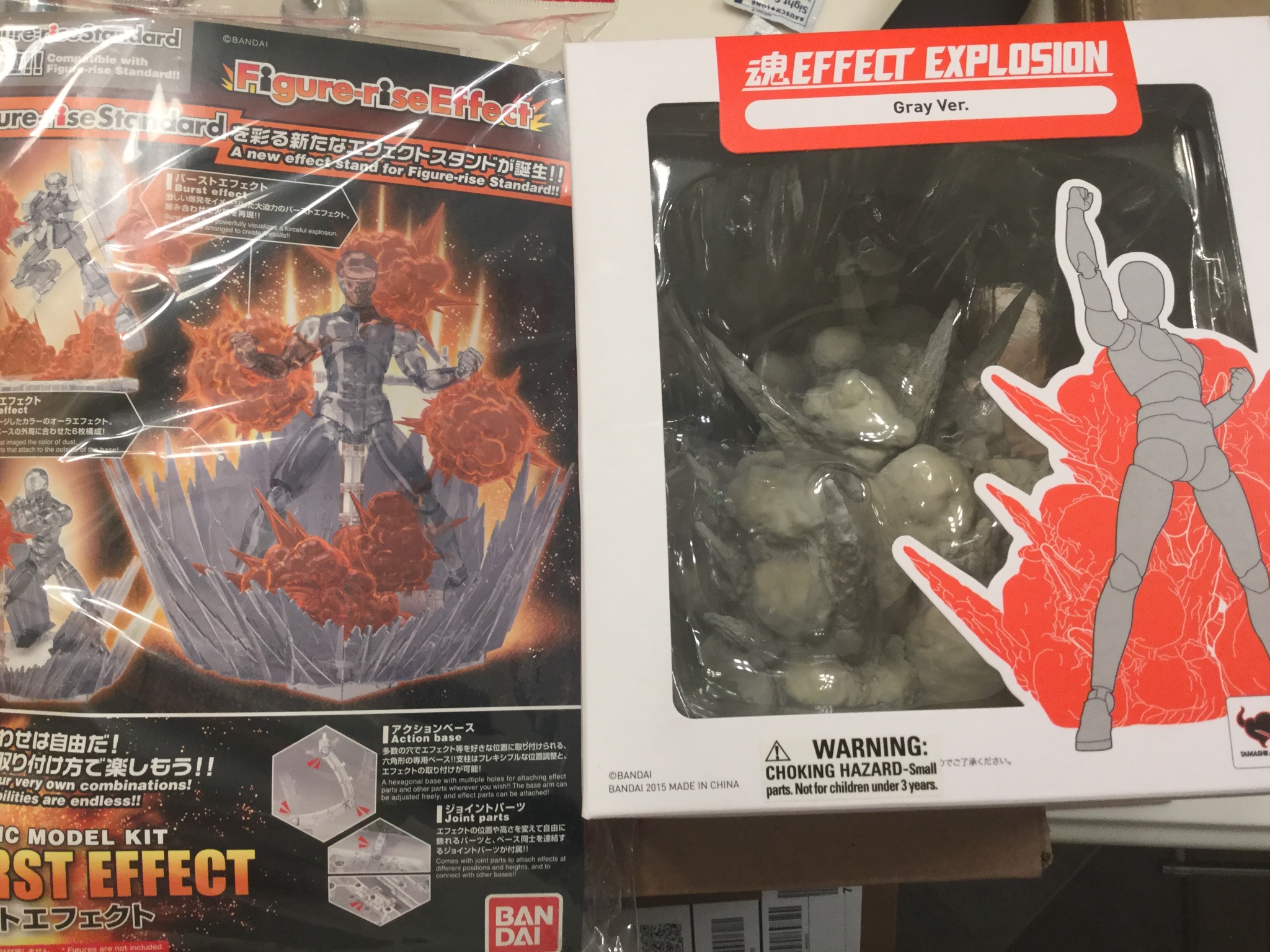 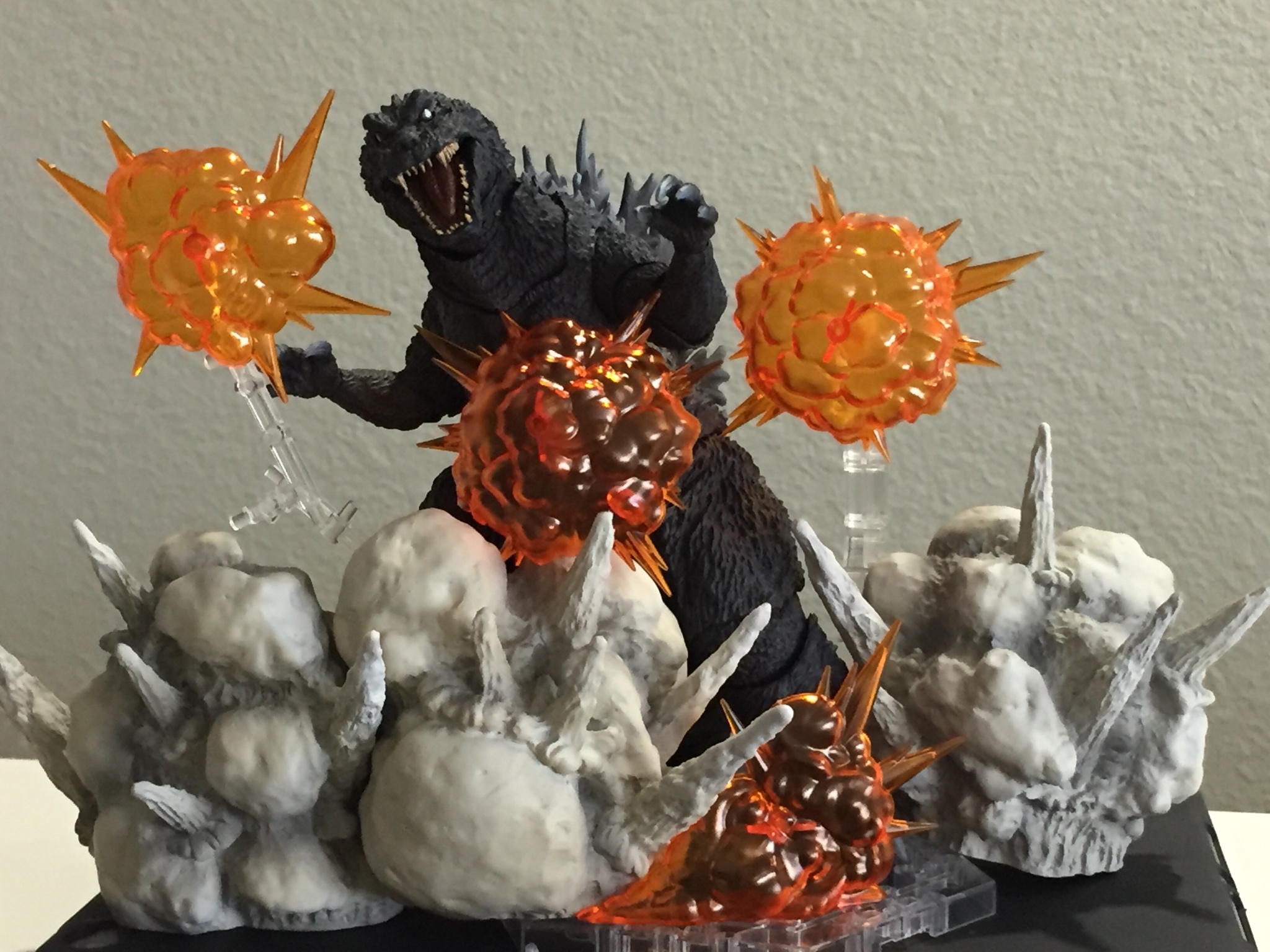 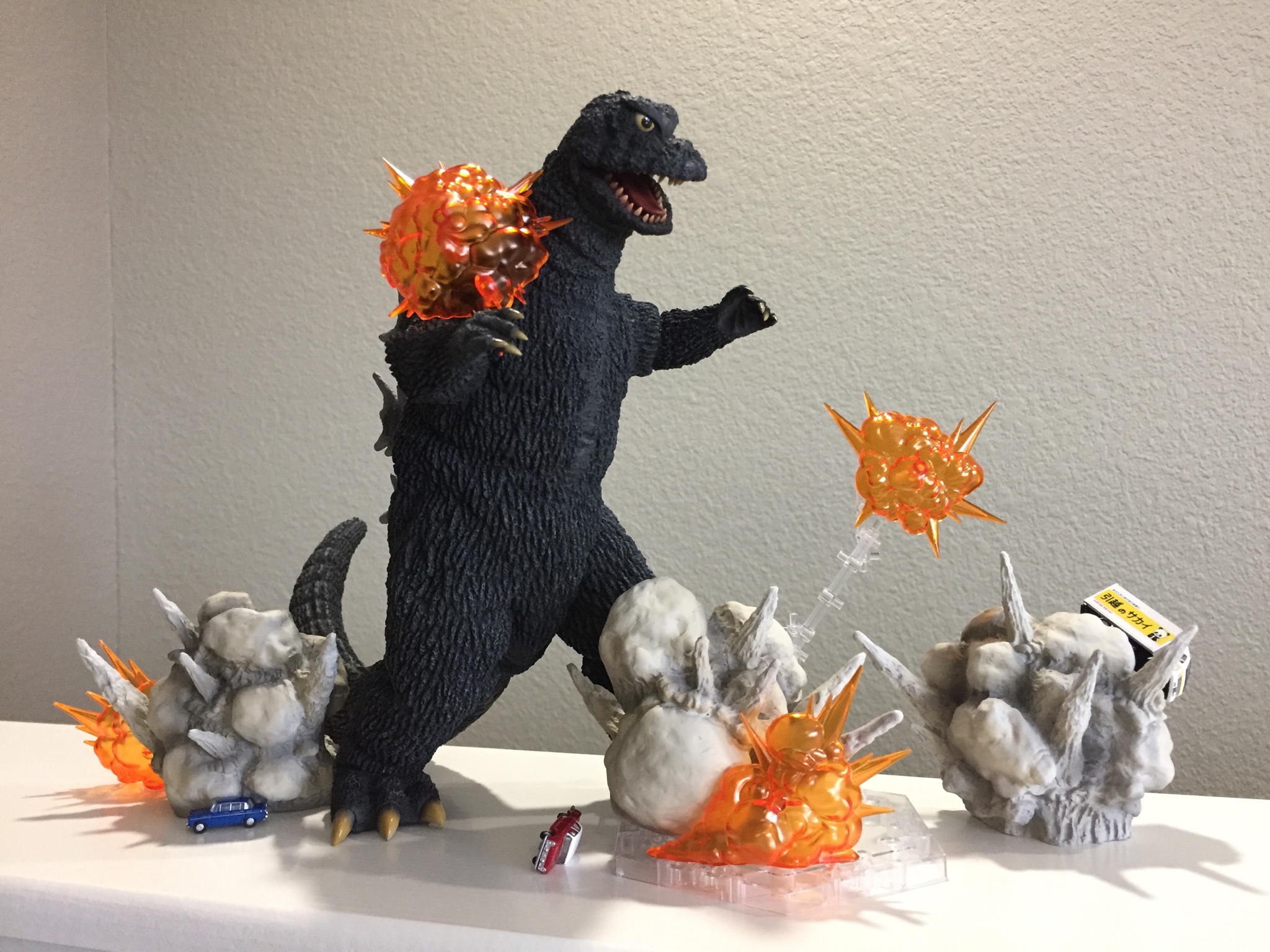 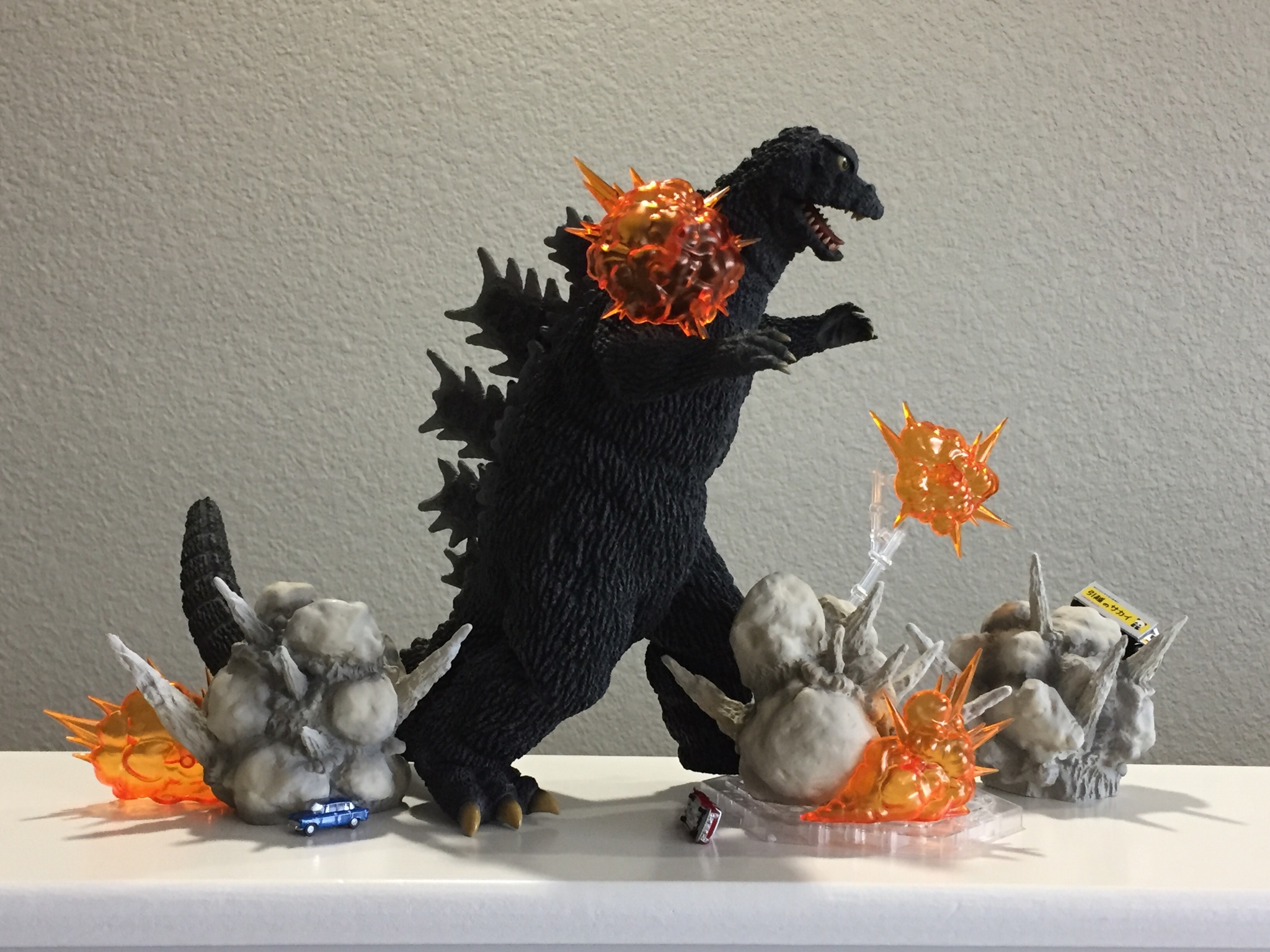 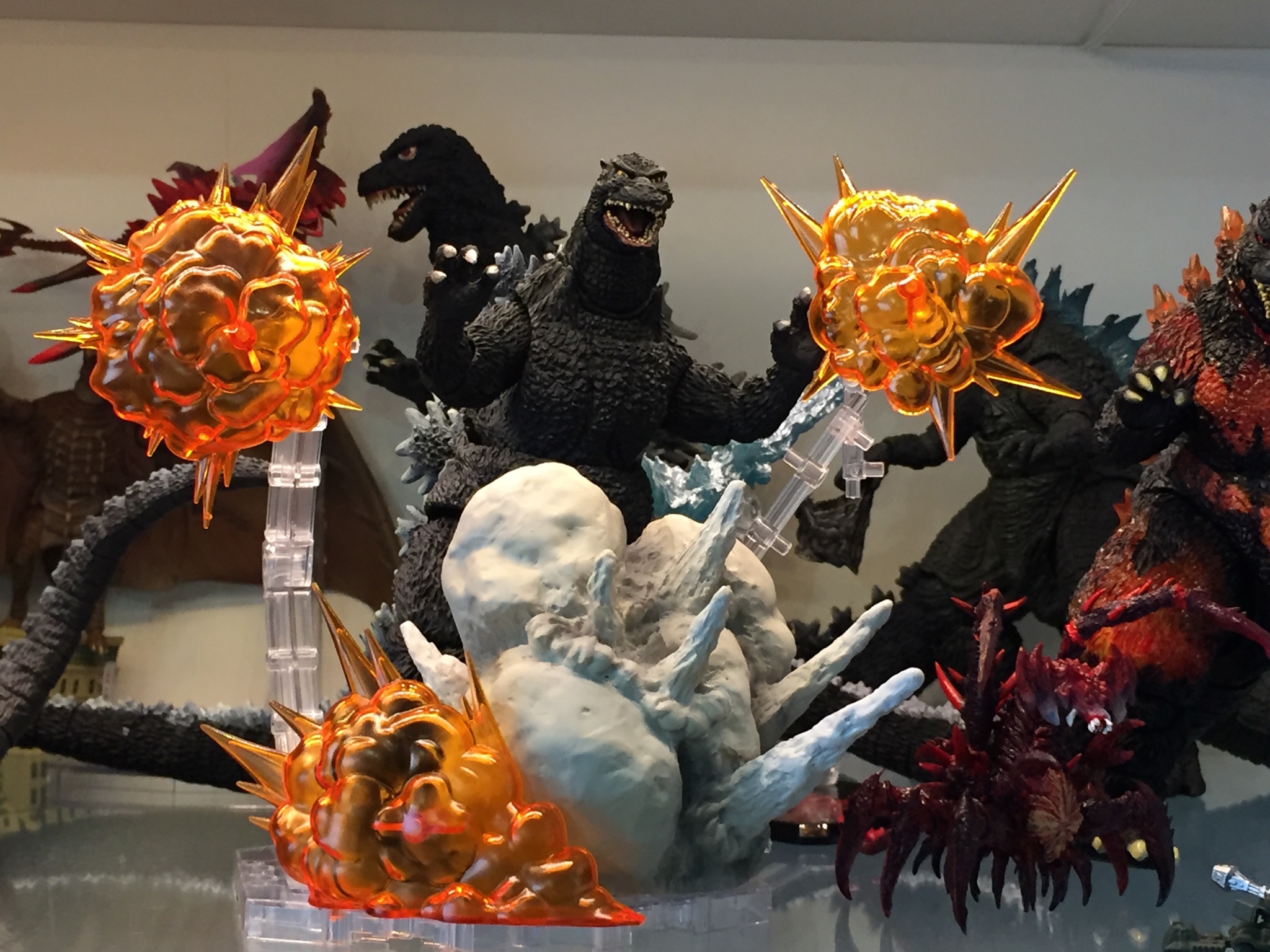 Ive also got some tamashii act damaged buildings on the way, as well as some Japanese n-scale model buildings to build. I’m also planning on painting and detailing the orange explosions to look more realistic like this: Got a figure I've been looking to grab for a few years now: The S.H. MonsterArts Godzilla 1954. 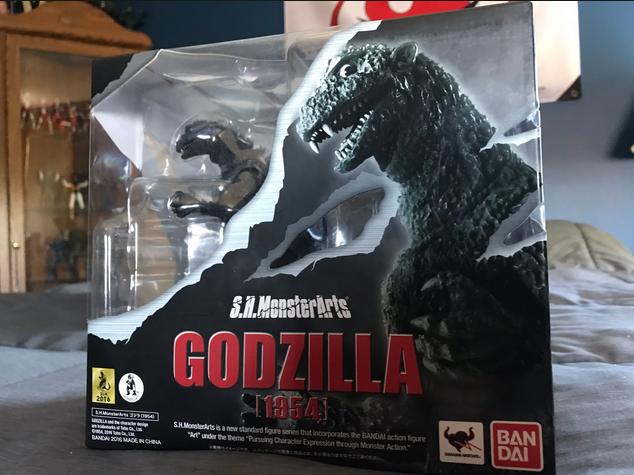 One of my favorite suits and now possibly my favorite 6" scale Godzilla figure. The articulation and detail on this is insane. I'm glad I can now finally catch up on this series and all the new ones to come. 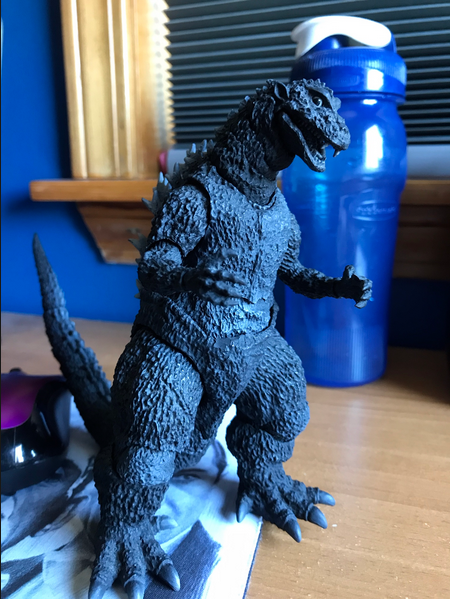 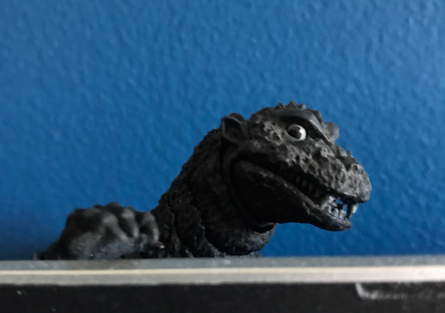 Looks great on my suit shelf! Still a few more to go before I'm all caught up! 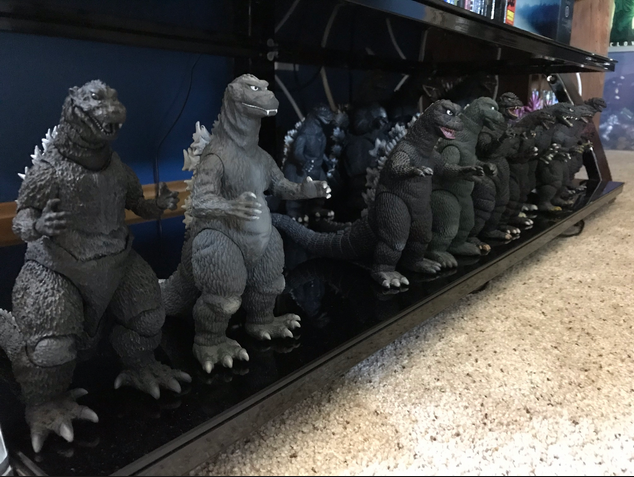 The 1954 SHMA is a very nice figure; the line is typically outside of my price range, but I got one of these on sale a couple of years back, and it's one of my favorites.

With KOTM on the horizon, naturally I've had movie merch on my mind. Last month I hunting around for these: 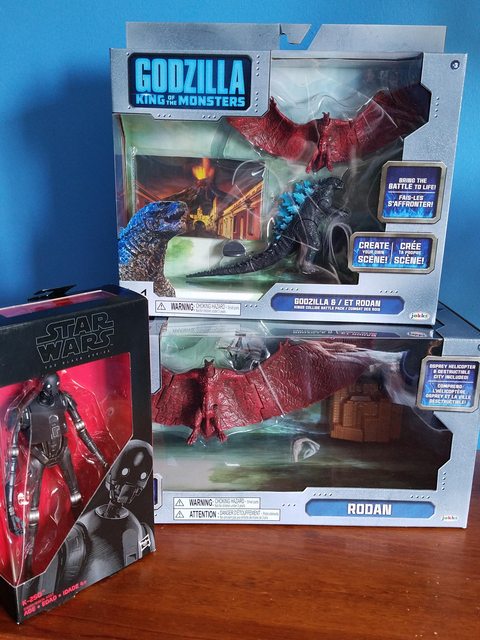 Rodan was my focus, as I intended to cover the other monsters with other brands. I do say, the Jakks Rodans look pretty nice - the big one is overpriced maybe, but not much more than Bandai vinyls these days.
(K-2SO was a surprise find at Walgreens. I'd been thinking about getting one some time, and then there he was!)

This week I finally found these two: 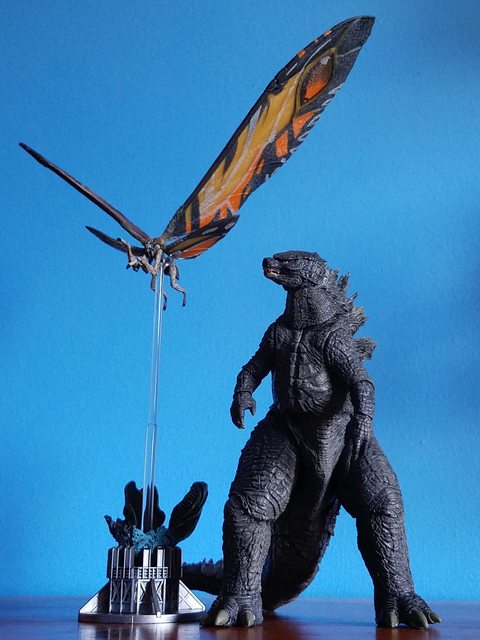 Yeah, I could have just ordered them online (now Rodan, him I have pre-ordered), but I wasn't that rushed to get them, and I saved a few bucks on shipping. Godzilla still has some sloppy face paint, and some of the articulation could use improving. Mothra is pretty small and feels kind of flimsy. Overall, though, sculpt details and paint apps on both are very good, and the articulation is serviceable. Not bad for $24 each.

Got my hardcover from Peek-A-Boo Gallery. 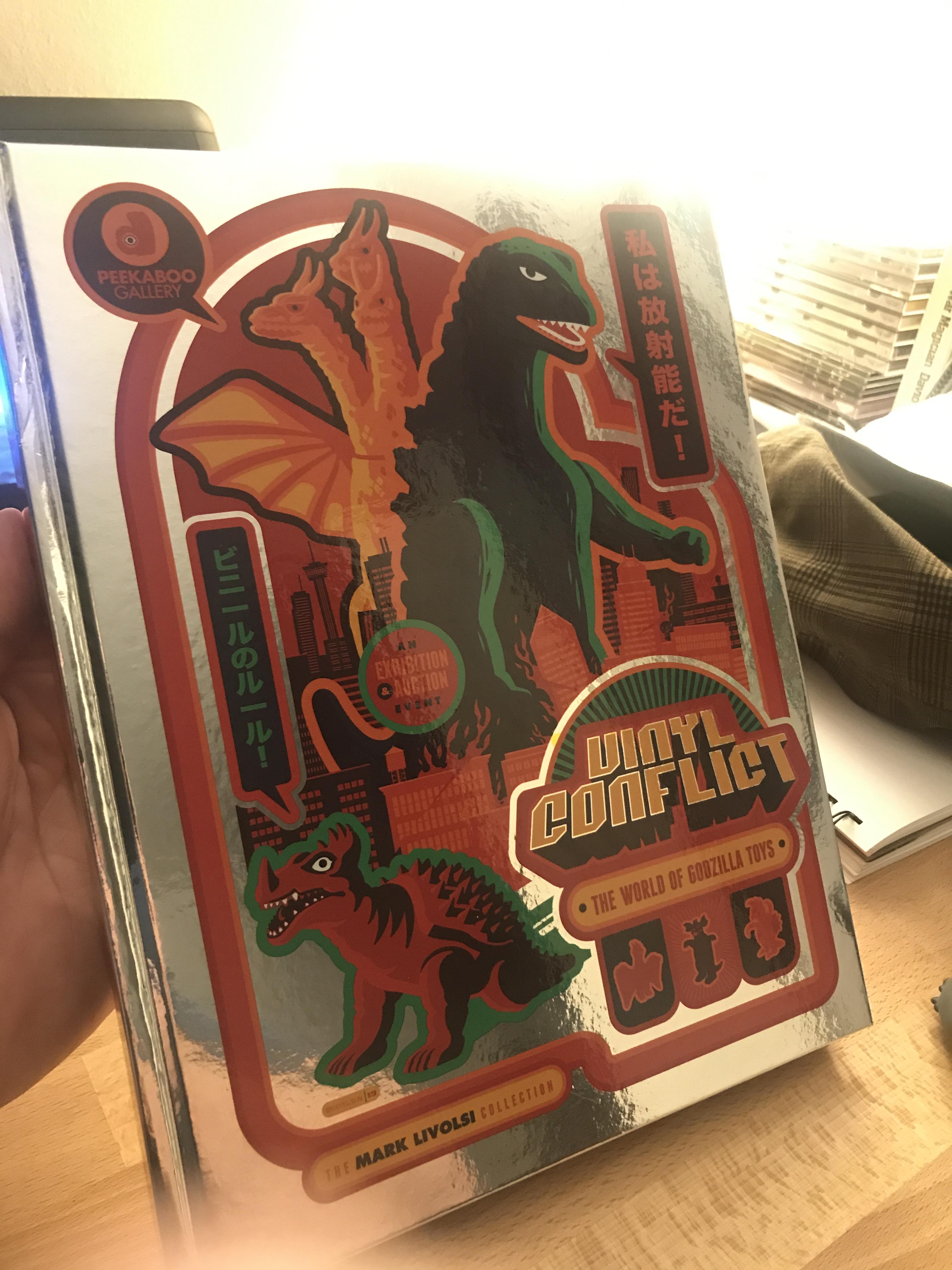 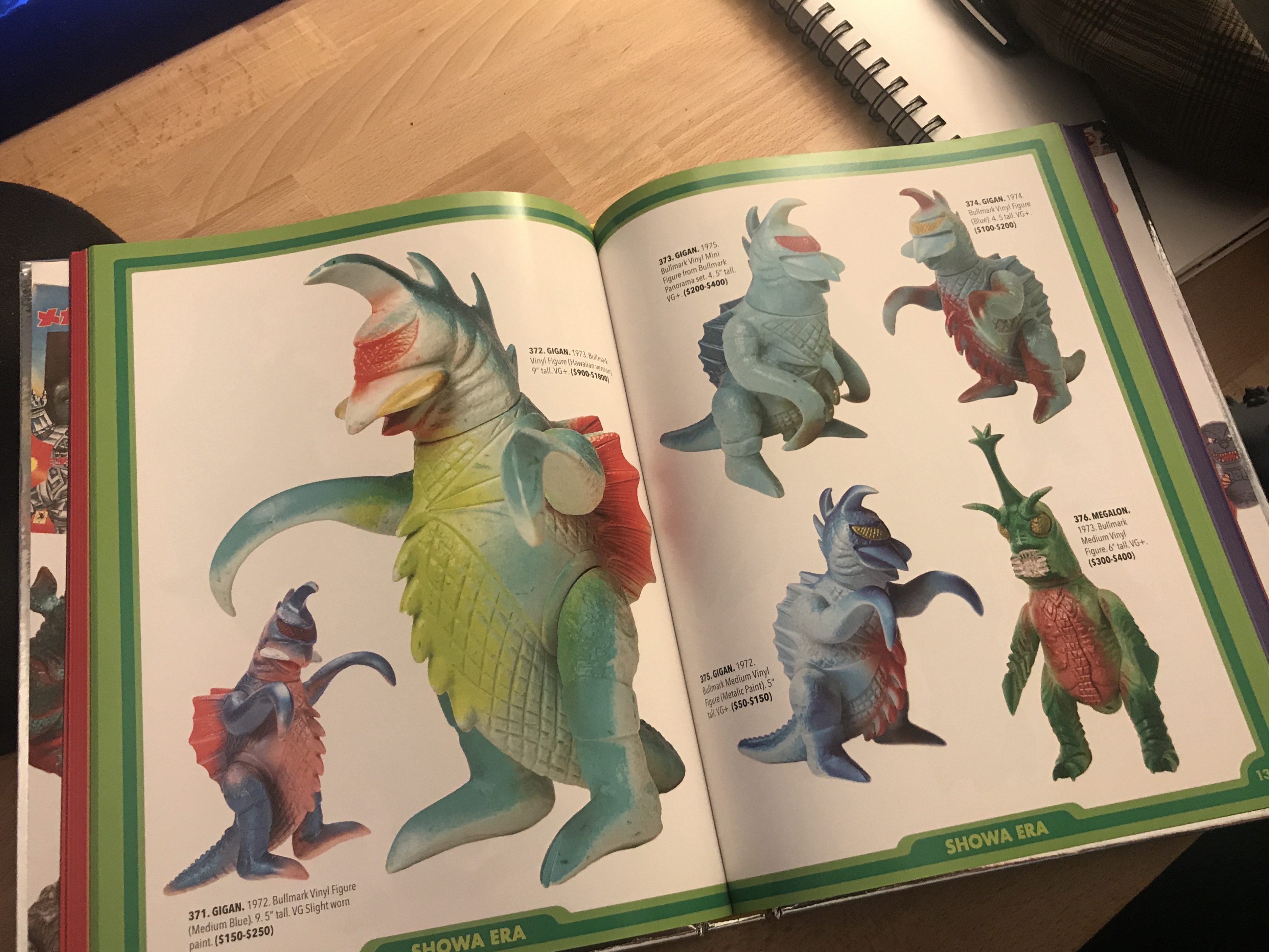 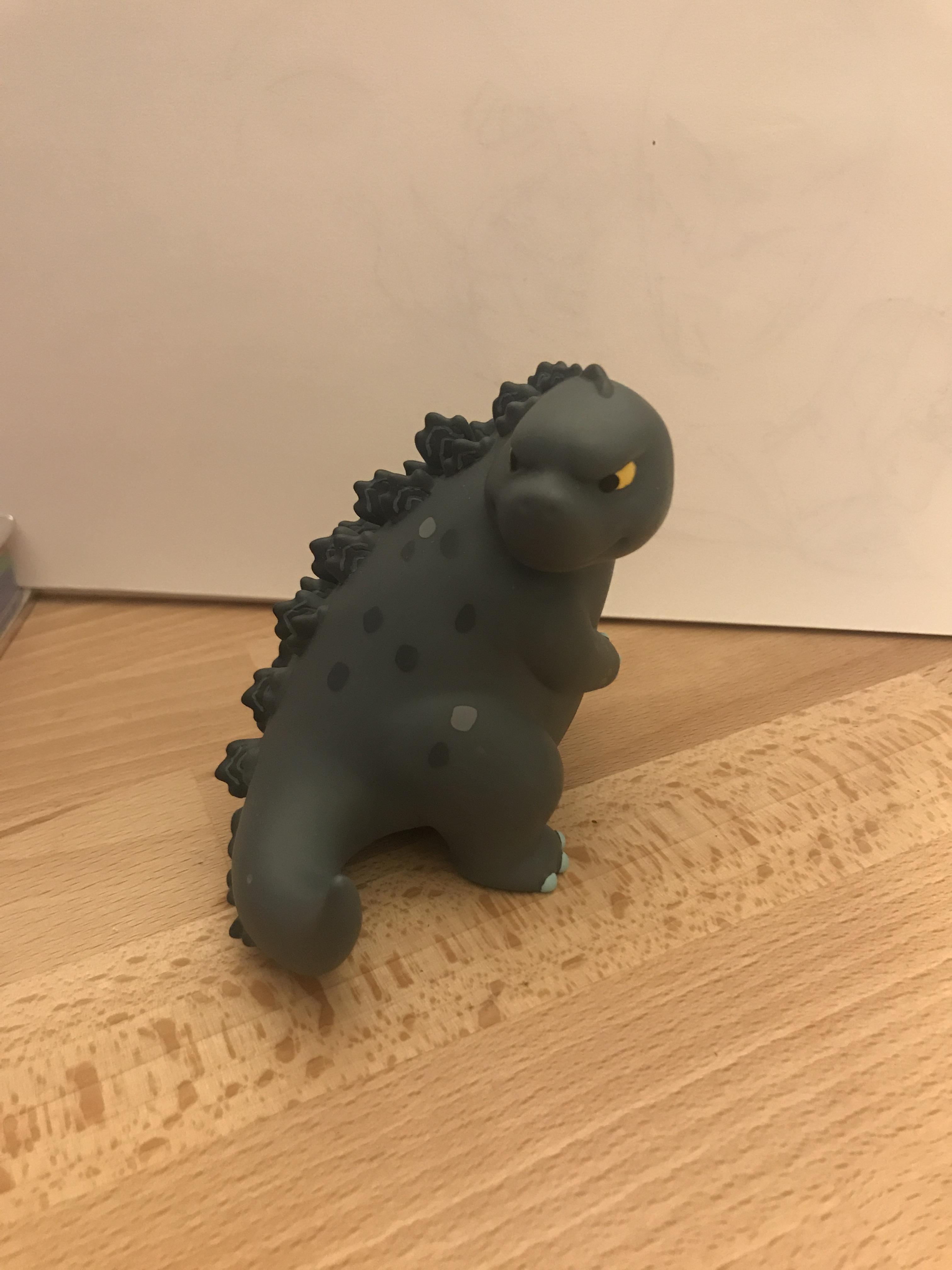 Wow, that book looks really cool! I’d love to know more about what it is and where your learned about it. Never even heard of it before your post.

Theres some good stuff, but it looks like it might be tricky to bid without being there.

Oh cool, it says they’ll be on display at G-fest next week. Maybe I’ll get the chance to see what they have set up and look at the book in person on Saturday. Thanks! 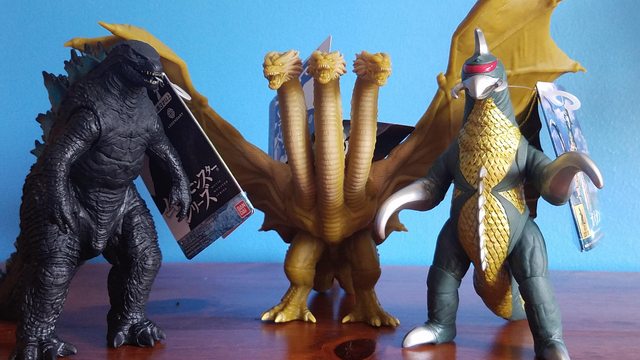 These guys arrived a couple months ago only to get boxed up again - I'm having to pack up a lot of stuff, so I didn't get much time to enjoy them! They're pretty good, overall, though; I do wish Bandai put in a little more effort for their vinyls, new and reissued.
Something more like this: 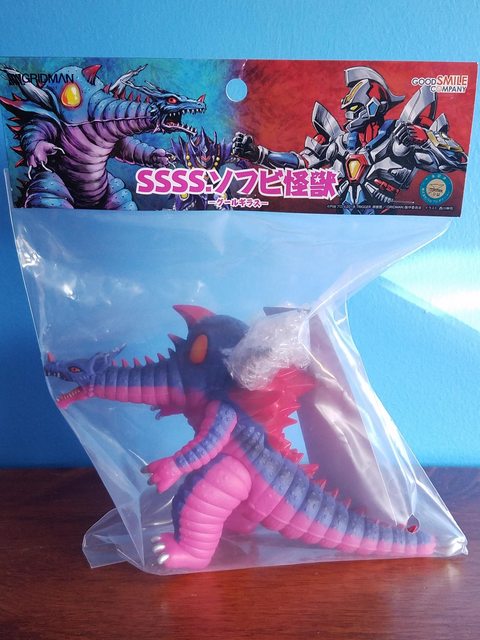 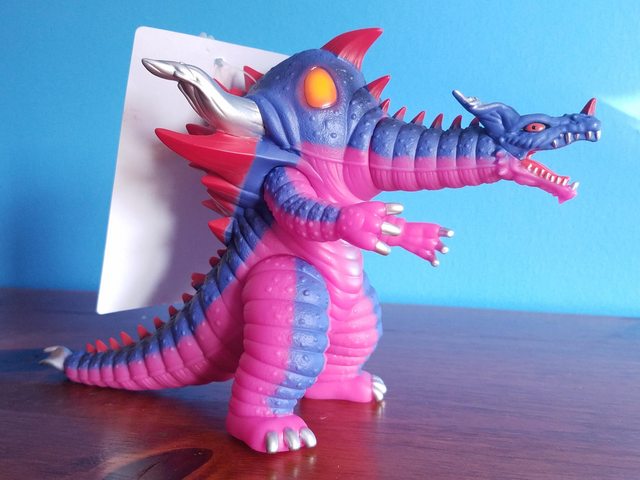 Now here's a swell-looking figure: Good Smile Company's Ghoulghilas vinyl from SSSS.GRIDMAN! It's kind of expensive for its size, but the overall sculpt and paint apps make this a more worthwhile purchase, in my opinion. If only more vinyl kaiju today looked as nice as this! (without costing an arm and a leg) 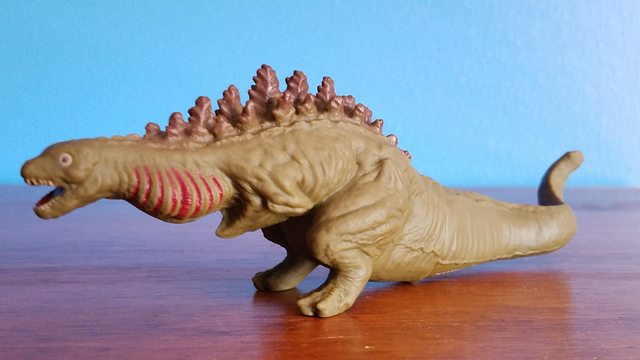 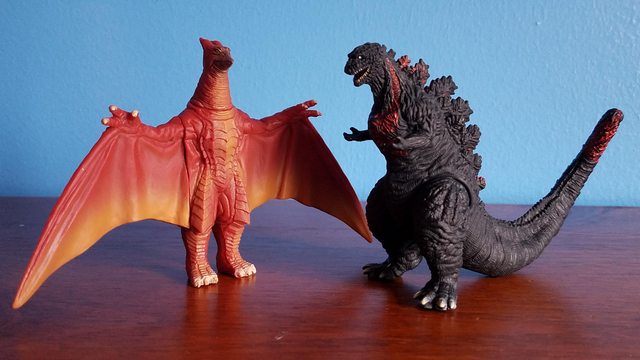 I've been checking my local Walgreens for these Hyper figures; usually there are one or two in stock, but I haven't found the one I really want yet, which is G89. They're pretty nice figures, though; I hope they sell well enough for a second run of monsters sometime.

Started a second job at Gamestop and basically sucked up my first check with these two. 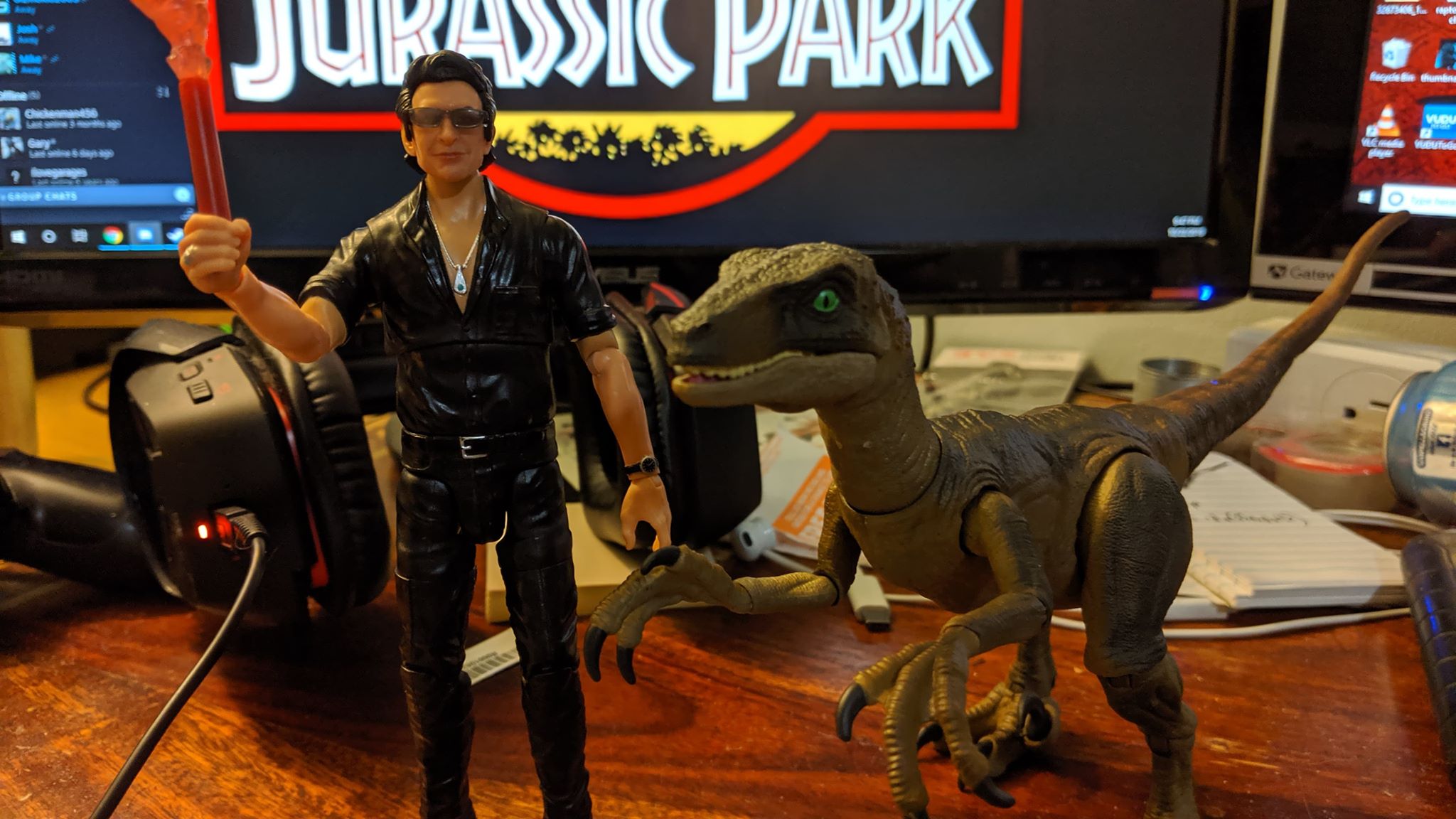 The raptor's feet are bigger than they are in the movie, but it allows it to stand without having to use the stand. The hands are a tad odd, they're kind of flat. More like the Beasts of the Mesozoic - Raptor series hands/claws than what's in the movies and previous toy incarnations. I am not a fan of bendy wire tails, but it does have a familiar texture, like how the original JP toys that had "realistic skin". Still, I'd rather have hard plastic articulation segments instead and with the Indo-Raptor from Fallen Kingdom getting a mildly segmented tail and the prototype of Blue having one I had hope that was the route they were going, but I guess I won't get that articulation unless a Japanese company creates a 6" scale line of Dinosaurs/Jurassic Park monsters.

The painting is good, but basic. Dark on the top, and a lighter underside with not much in between. It doesn't have the "tiger stripes" that I usually associate with the raptors due to the toy lines and the more prominent striping and orange/black coloring of the male raptors in TLW. There's some shiny dark striping on the rubber tail but that's about it. They could release recolors for all the movies(although they'd have to do some retooling for the JP3 raptors and their two distinct paint jobs), and you know what, I'd probably buy them. I wouldn't even be surprised if they do some con exclusive packs, like all 4 of the JW raptor pack with more accessories than an amber stand for over $100.

Malcolm is good. Not quite up to the level of a SW Black series, but it's a good step forward for Mattel. The sunglasses are glued/molded onto the head and can not be removed, which is mostly fine but every now and then I think they might be crooked on his face but glancing at him on my desk, they look fine. He can't swing his leg behind him, so no running poses, but other than that the articulation for the legs are good. He comes with an amber stand, a lit flare, a glass of water and two sets of hands. Two relaxed hands and two holding hands, the right one for the flare and the left for the cup of water.

Apparently, Nedry and the Dilophosaurus have been hinted at and those are must gets, especially the dilo. If they're sticking to the 6" scale there's not too many dinos they could do in scale with the figures without getting big and pricey. All I can think of is the baby rex aside from the raptors and dilo. They could do a pack of multiple compys but I assume there wouldn't be much articulation with figures so small. But I'll gladly take a Dr Grant and Dr Sattler, and hope they come out with an open shirt "battle damage" Malcolm. Can't wait to see what else is going to be in the Amber Collection!

I've decided to give up on hoping for MonsterArts to make Showa figures (and NECA to the non-Godzilla extent) and picked these guys up when I came across them at Walmart: 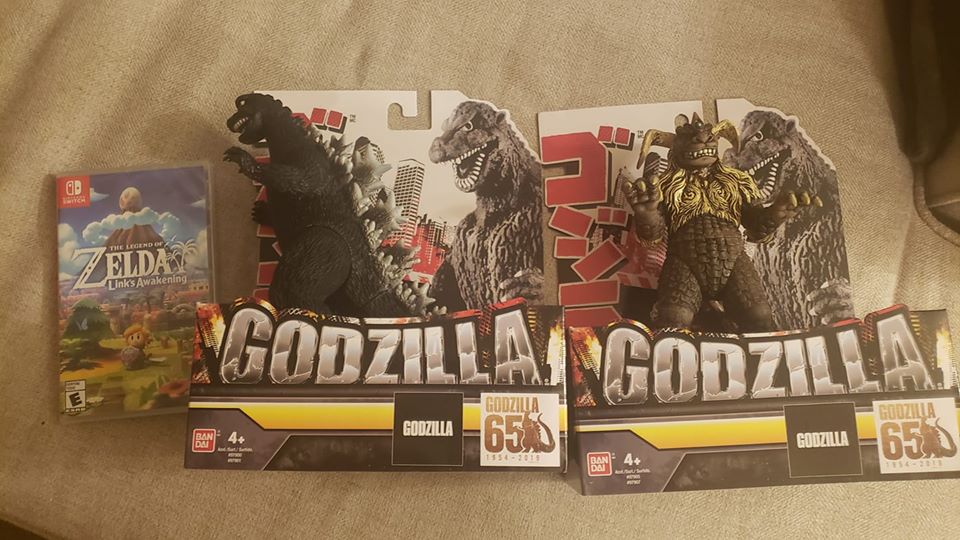 The paint job on King Caesar is actually quite nice for a $13 vinyl.

As for the Godzilla, he goes quite nicely with the 3 Showa NECAs I do have. Actually, I used to how this 68 figure and I liked it a lot back then, but got rid of it expecting Bandai to eventually do one in the MonsterArts line. How stupid I was.

They did have MechaG74 as well, but since he does have a MA I need to pick up at some point, I figured there was no reason to grab him.

I know i'll catch grief for this, but this sculpt of King Caesar is way better than the Japanese Bandai release

It’s a much better sculpt. 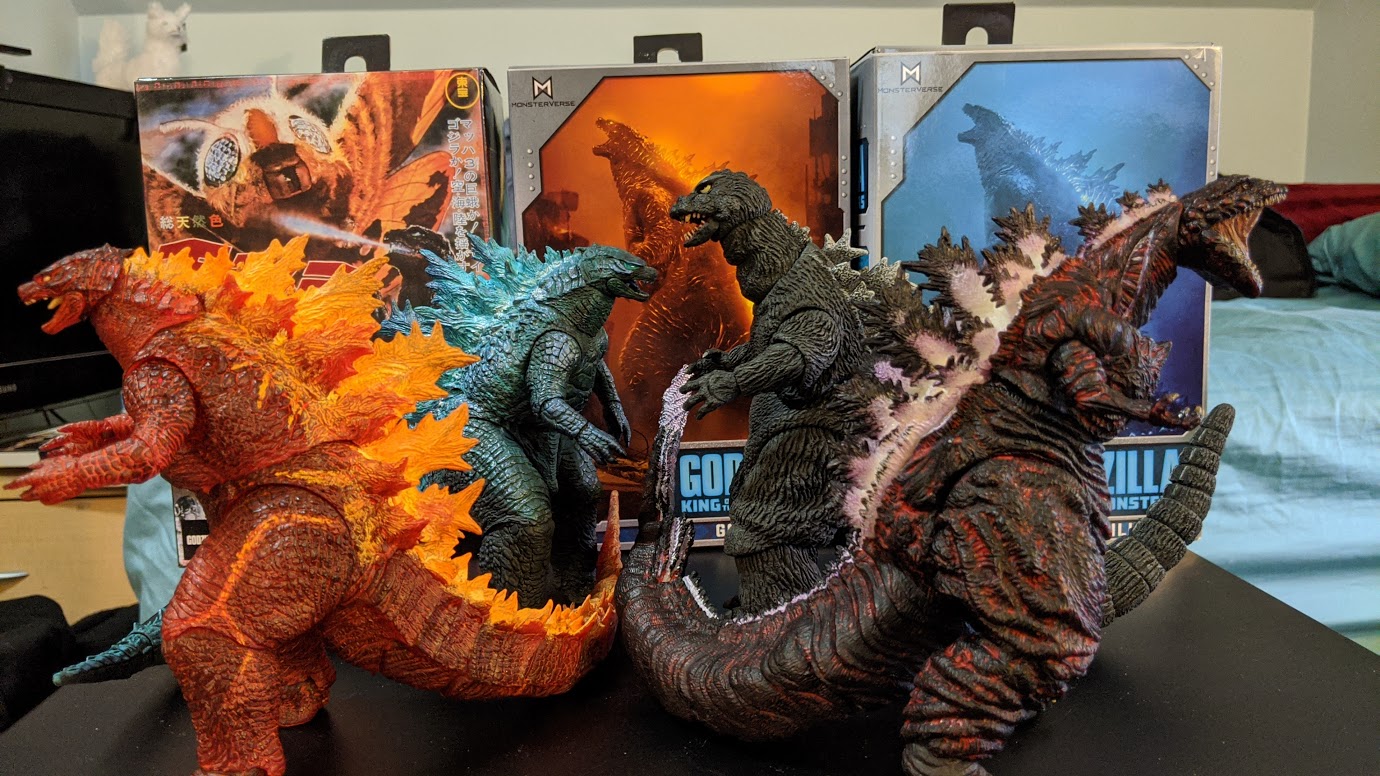 Sadly, I grabbed G'64 before NECA's buy one get one half off.

I plan on modding Fire breath so that it can aim upwards.

I'm actually kind of disappointed in Burning G'19. His fins are colored like Kraft Mac and Cheese. If they were a different shade or went into a yellow, it might look better. But other than that, it's a great figure.

Got the Bandai Direct pre orders in. 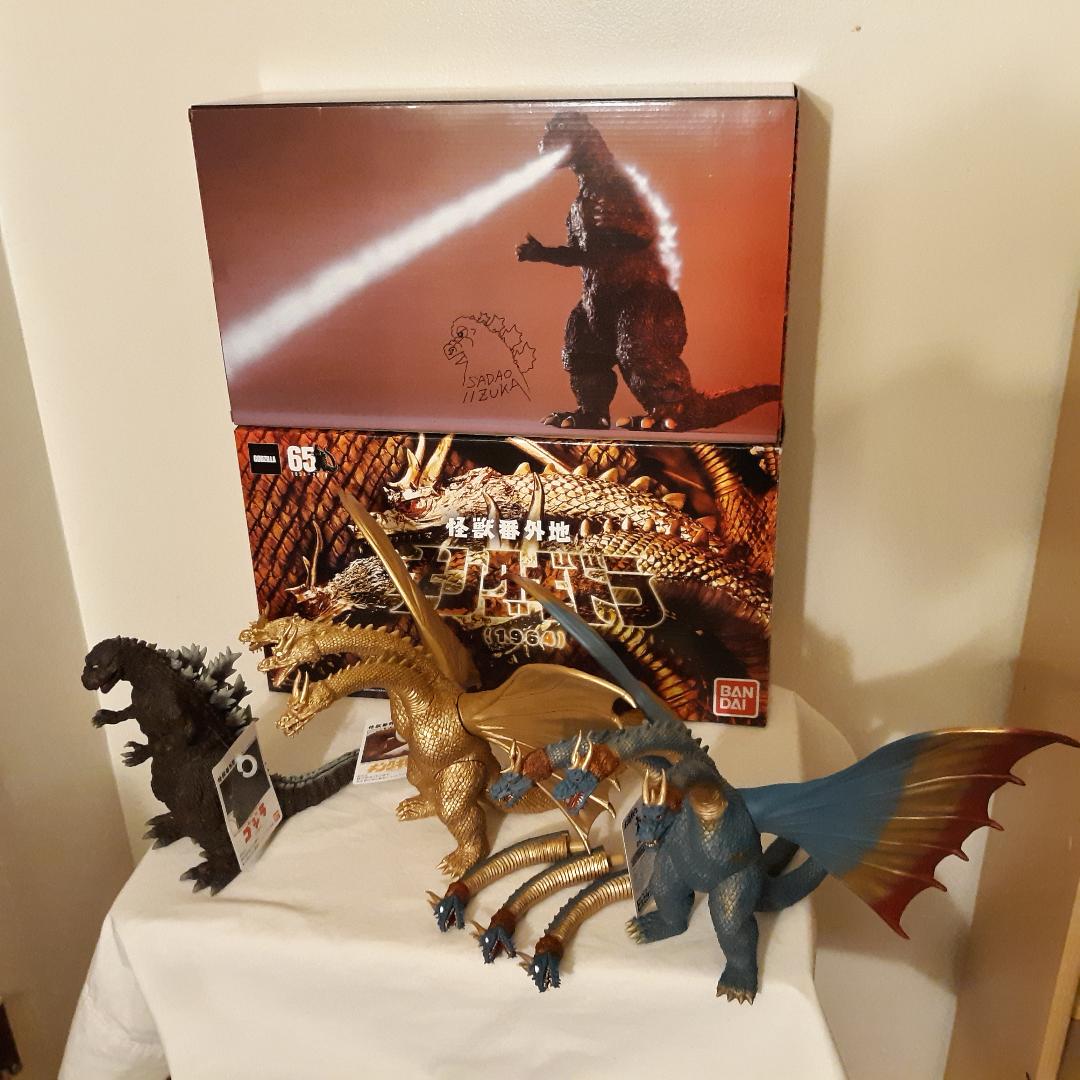 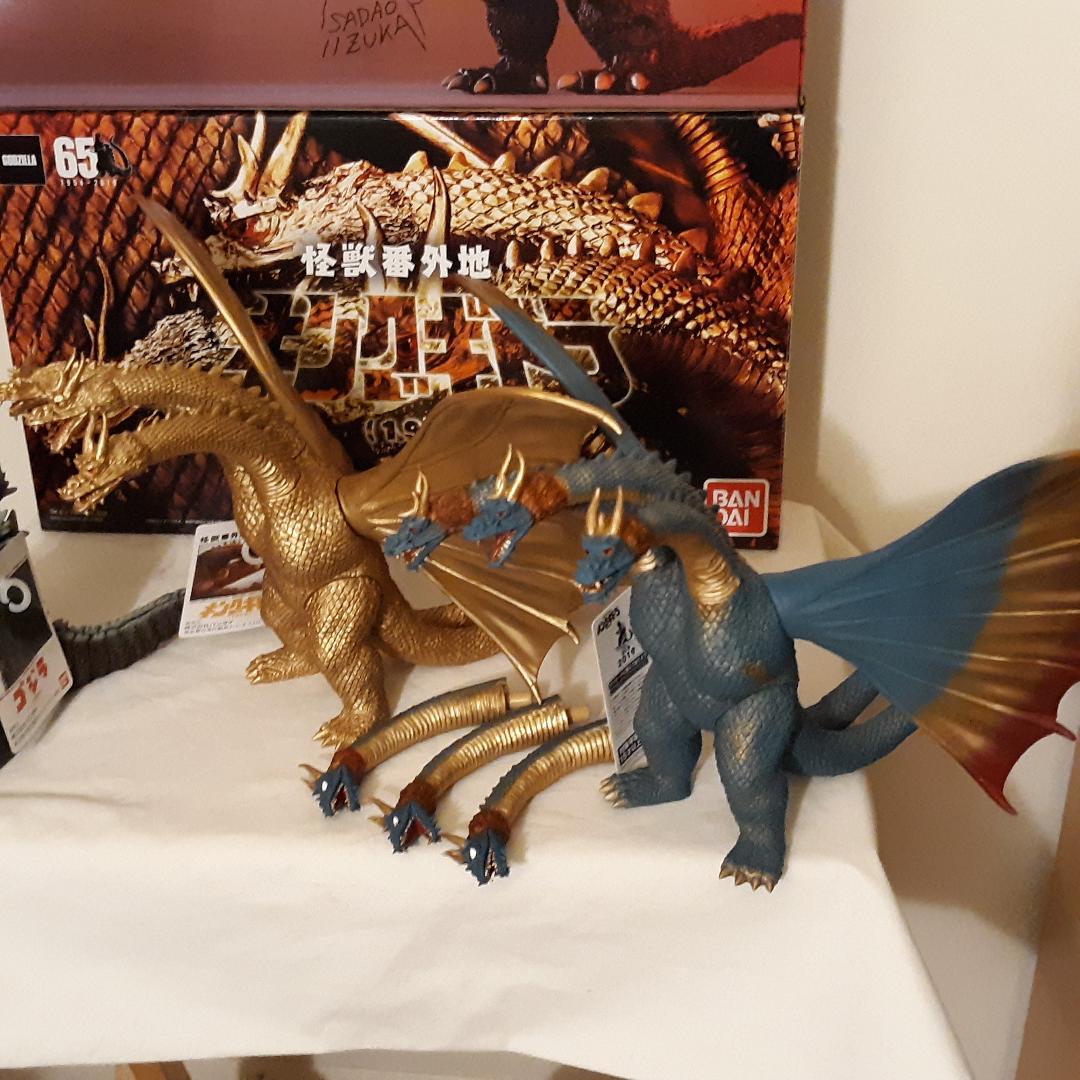 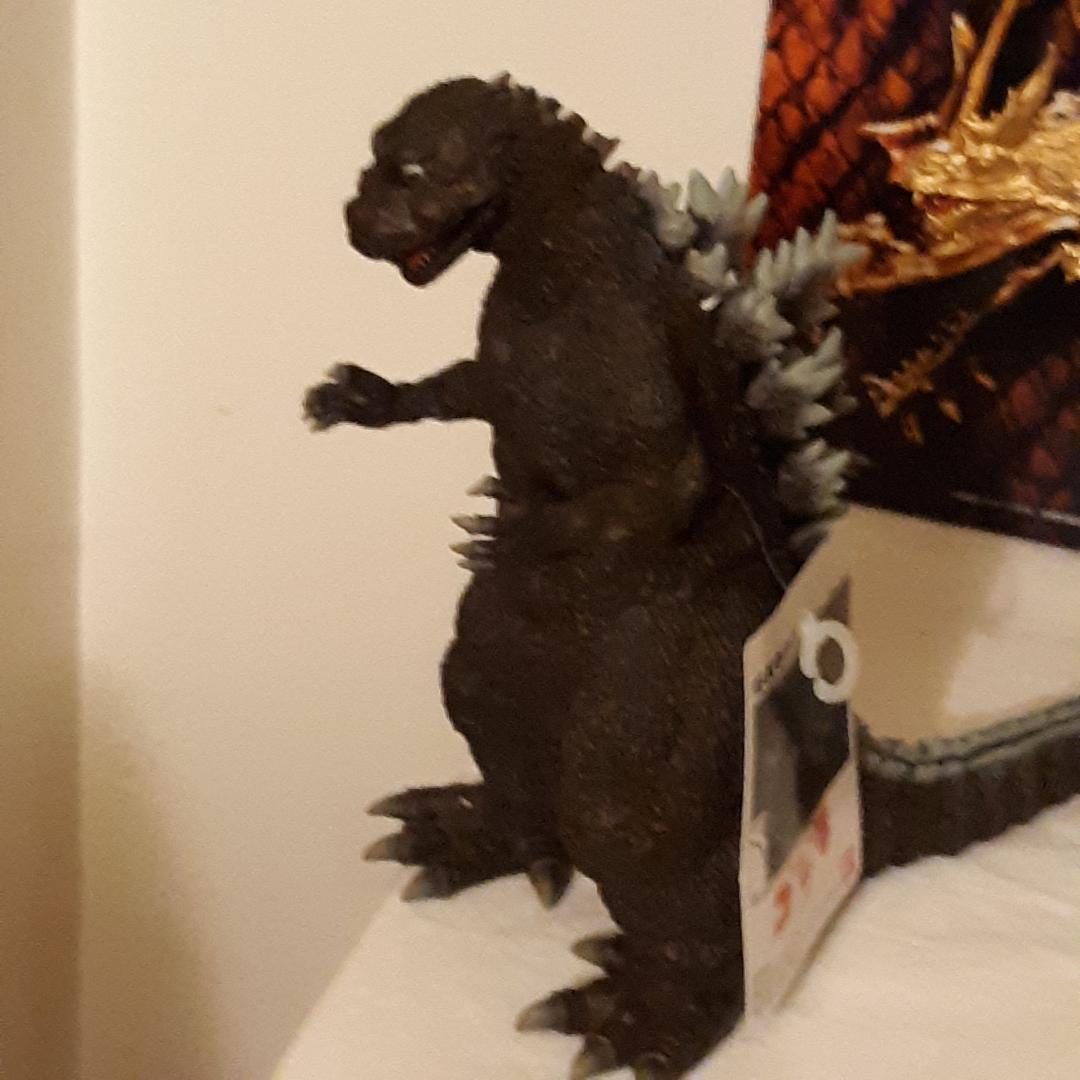 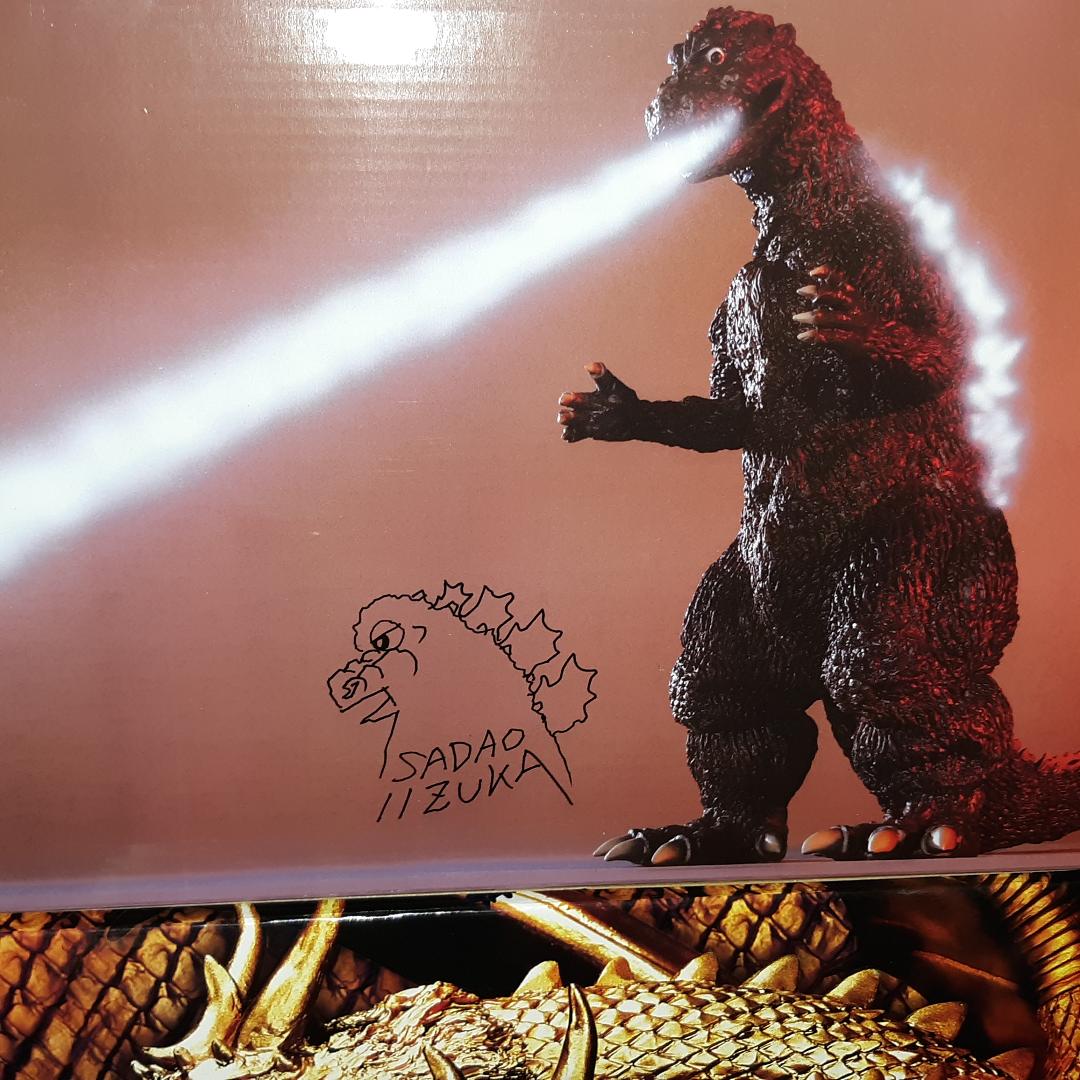 The boxes are too fancy they should cut costs. I am a sucker for the 54 suit. That's why I bought it. Nothing to special about it. i guess its panted really well with different shading or what ever. in the light close up you can tell. Nice hard material and Details. Ghidorah's parts go on really well. Good joints.
Joined in 1997