^ Bigger than I expected

What a great figure of Shin's second form!

^ Thats the rumor. Which would make 3rd form larger than the typical 30cm figures i believe.

I was shocked at how small the 2nd for SHMA, so maybe thats why my sense scale is a bit skewed here. So I need to know, how fragile are the X-Plus vinyls? I ask because a local arcade had their 68 Ghidorah as one of the prizes if you acquired 44,000+ tickets. However, the other night when we were there, they were no longer giving away that Ghidorah because the right wing broke off. How could the right wing break off if it is a vinyl figure?

There are always exceptions, but in general they are fairly sturdy -- one such exception is the wing joints on the King Ghidorah. The first release of that had some issues. The Diamond reissue of the G'99 had a clamshell support that put too much pressure on one of the spines and caused damage in cold situations if the box got tossed around, but otherwise there aren't a lot of widespread issues for this company.

Even if there are the occasional issues, X-Plus does not have anything close to the QC issues that plague SHMA or Chikyu Bougioen/Albatross

While I don’t have the ‘68 Ghidorah, if it’s anything like the ‘64 Ghidorah (which I do have), the wings don’t feel like vinyl. They are much harder and feel more like styrene plastic or something similar. Which would make sense because there’s no way you could make such large and thin wings out of the softer vinyl used for the body without MAJOR drooping issues. I suppose that they could be made out of harder vinyl akin to vinyl records (which can also break...). But my gut tells me they are plastic.

But whatever they are, they are very large, heavy, and quite thin. The material feels decently brittle. So, while they are sturdy enough, it’s not a vinyl bandai toy that can be handle roughly... if you drop this guy or bump him too hard in the wrong way, the wings are totally going to break.

Plus, vinyl can totally break. Vinyl can be made in a very wide range of hardness or softness. The harder vinyls (like records, or even the old 80’s-early 90’s bandai figures) can be broken quite easily, especially if dropped on a hard surface.

Maybe it was the 64 one then because the crack did look like it was styrofoamy.

Well, like I said, I would highly suspect both versions are made of similar materials.

Okay, I just realized something, are the X-Plus vinyls not articulated at all? I always thought they could move at the shoulders, thights, and top of the tail like the Bandai ones did.

No, they’re vinyl statues. No articulation. More accurately, they are model kits that are prebuilt and prepainted. Most of the x-plus sculpts were originally released by other companies as unassembled resin or vinyl model kits.

Edit: hmm, maybe not “most”, but definitely several.

Unfortunately what you want doesn’t really exist. For articulated “realistic” vinyl sculpts, bandai is pretty much the only game in town. There have been some higher quality bandai vinyls from the “P-Bandai” line (“P” for premium). They’ve got a pretty cool looking Showa Ghidorah set coming out soon. 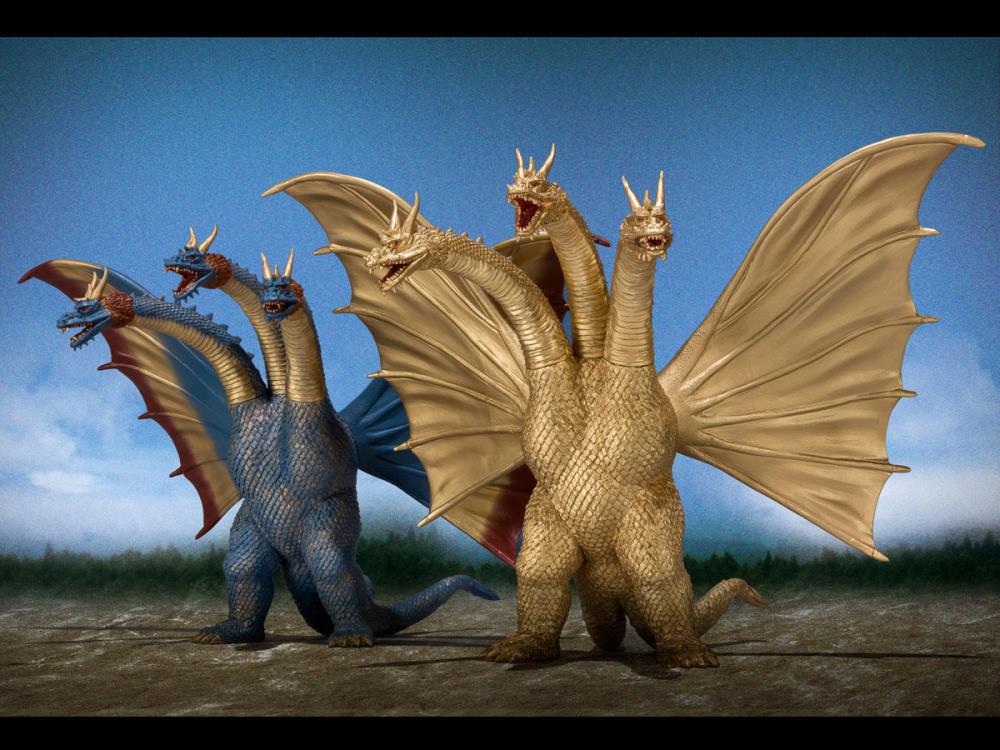 The preorder for those ended months ago. They are supposed to be shipping in December. You can still use a middleman like awesomecollector.com, but expect to pay a mark-up on an already pricey toy


::edit:: and in a move that echoes what some fans are claiming that Bandai is trying to be X-Plus with this new premium line, the Premium G'54 that just came out has ZERO articulation