I'm assuming a lot of us will be watching this multiple times in the theater. I'm going to try to see it in as many different ways as possible. To that end, I have Cinemark XD 3D tickets for 5/30 and IMAX tickets for 6/1. If it's still showing in Screen X the following weekend I'm going to travel to the East Bay to see it that way too. Might even see it in those 4D motion seats.

FYI if you're wanting to see it in IMAX better do so the first week as Dark Phoenix will be replacing it.
Let those who worship evil's might, beware my power...

Let those who worship evil's might, beware my power...

I apologize in advance if there's another thread somewhere that I haven't seen, but has anyone read Godzilla Aftershock, the graphic novel prequel? Is it any good or spoiler-y? Thinking about buying but don't want to if it has spoiler potential or as atrocious as the G'14 prequel one was (can't remember the title off the top of my head)

^Honestly, I almost forgot about that! I know that Amazon is caring special variant version with an Arthur Adams cover. I better get on that!

Unofficial "review" from the guy who runs the Maser Patrol blog says it's pretty much just forgettable. He says it has some decent ideas but the art is UGLY.
Gills.

Don't if anyone's read this or not but I thought I;d post the link here. A very interesting interview with G'19 production designer Scott Chambliss. Nothing spoilery... and the concept art sprinkled throughout is To. Die. For.

LOL. He can't do an ad if his life depended on it. What a sincere review from imaqtpie!! No spoilers. Just funny watching a caveman and his mannerisms.

Got free tickets to an early screening this Wednesday. Now I’m hyped.

I don’t know about y’all in the rest of the country, but we’re 2 weeks away from G: KOTM being released and I could swear I’m not seeing much advertisement coverage of it at all, and that worries me.

^ I couldn't disagree more! Several different trailers being shown in front of the huge movies of the past few months, TV ad campaigns targeting major sporting events, trailers airing as paid promotion before YouTube videos, tons of trailers and TV spots created, and that's not even counting all the social media stuff. The trick, for me at least, has been trying to avoid all this stuff!

If the movie is an enormous bomb I won't lay any of the blame on Warner Brothers marketing. I'm tremendously impressed with their canvassing.

Agreed. WB's marketing for this film has been all over the place. Just saw an ad yesterday for the film on a TV in our breakroom at work. It's out there. If folks don't turn up... not much WB can do that they haven't already done, honestly.

Ok, I should probably change that, I basically mean TV commercials primarily. Just seems they’re few and far between. I don’t know, it may be just me.

The TV marketing is in places where they feel the largest audience will be. I’ve seen a few but we watch a lot of home improvement "OH GODZILLA! WHAT TERRIBLE LANGUAGE!" because that is our area of business so no Godzilla.
You must show no mercy, nor have any belief whatsoever in how others judge you... for your greatness will silence them all! 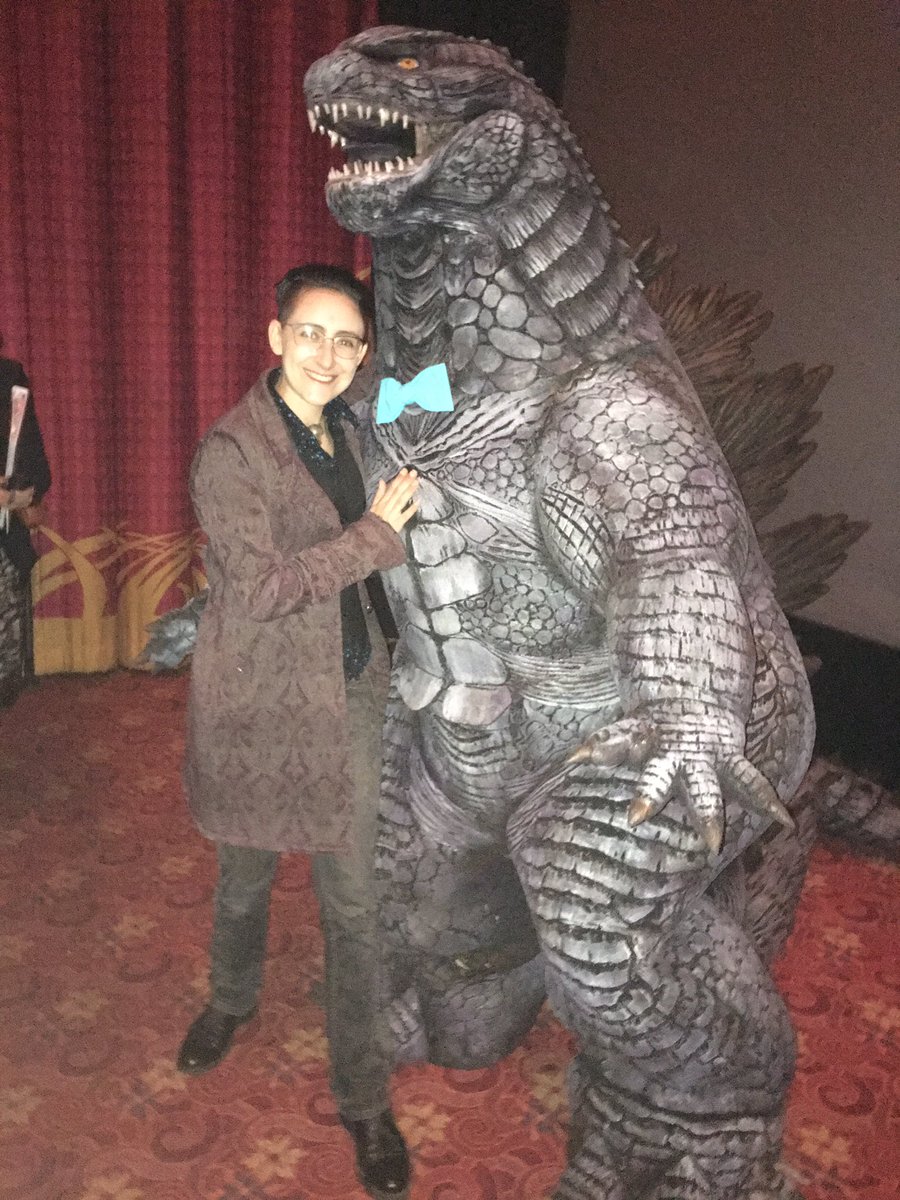 This fan made this Godzilla suit and someone in charge noticed and they ended up using it at the premiere! How awesome is that? I think she was able to attend the premiere, too - from what I see on her social media.

We hear all these stories about bad fandom these days, and with good reason, but it's always good to point out instances of fans being really cool!

There's been a ton of cool posters, official and fan made, but this Chinese one takes the cake: 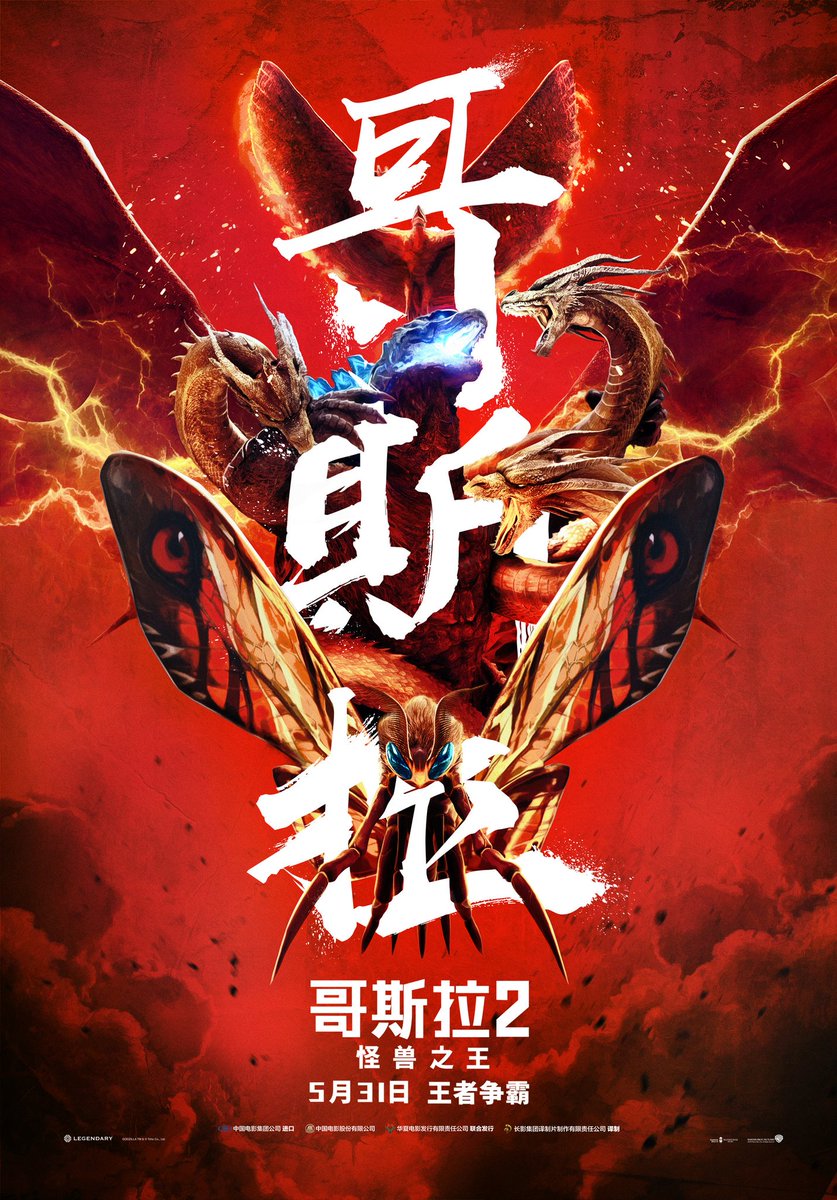 If you're anything like me, and I know I am, you grew up on Godzilla. And if you're a little more like me, you grew up watching mostly the 60s and 70s Godzilla. Whether it was from what aired on TBS when I was quite young and managed to tape despite missing the first minute or two or one of my parents flicking the channels in the middle of my recording because they forgot I was taping something, or actual purchased VHS tapes from the local department store, or the movies that aired on MonsterVision on TNT when I was in my tweens and teens, the 60s and 70s monster-mash Godzilla movies were always the preferred fare of both those selling and those buying kaiju products. Colorful, with good music, and packed to the gills with men in rubber suits slapping each other silly, the Jun Fukuda Godzilla movies are the comfort food of kaiju eiga. If you're further like me, you hit a point where these movies seemed a little TOO silly and embarrassing for you. Sure, they were fun, but oh man that melodrama and those effects, right? I mean, could someone try to do this seriously please and maybe give it a budget?
If you're still further like me, and now you're just starting to creep me out, you probably grew out of THAT, and have come to just embrace the campy Godzilla with open, loving arms as part of the franchise's rich history.

Michael Dougherty is apparently like me enough to not creep me out. He never grew out of that.

Godzilla: King of the Monsters is the Godzilla movie you'd get if you handed the reigns to the Godzilla franchise to a kid with a big imagination....and also if you gave him $200 million and a bucket of cocaine. Dougherty has made the highest-budgeted 70s Godzilla movie of all-time. He's taken it a tad more seriously than those movies, though it still has a very (American) sense of fun and campy charm, and he's glitzed it up and given it a base level of quality those films never had a CHANCE to have, but Godzilla: King of the Monsters is the movie I think we'd have gotten if you mixed the insanity of Jun Fukuda with the earnest optimism of Ishiro Honda, with a dash of mid-late 90s Spielberg and his propensity to overdo the spectacle and action.

If that's all enough for you, then stop here. I won't even get into anything I'd even remotely consider spoilery, yet, but some people just want a person to say "Was it good or bad or what?" and so, there you have it: it's crazy and fun.

If you're still here, let's talk a little about the bad stuff first, to get it out there and out of the way.
I wouldn't consider any of the below spoilers AT ALL, but some people kinda sorta MIGHT? I dunno, I don't want to spoil it for anyone, so I'll be careful here.

The music is improved from the 2014 film, though I'd want to listen to that score a little bit to see if it's as improved as I was thinking while watching it, or if that's just me getting tricked by the nostalgia feels of hearing Ifukube music.

So, that all said, where does the movie fall? It's probably too early to tell. I always have difficulty really accurately rating a movie after just one viewing, and this is no different. I could see it sidling up a little bit on rewatches as I wade through the overwhelming elements and into more familiarity, or down as I potentially start to feel less drawn-in by the world building and more worn-out by some of the mediocre dialogue (and that's not just corny humor, there's some real non-sequitur stuff happening with the dialogue at times).
What I do know is this: while I may not have been particularly jones-ing for a 70s Godzilla movie on a $200 million budget with enough cocaine to make Godzilla himself spazz out like a child who's just eaten the entire truckload of cotton candy, Michael Dougherty does THAT to its very best. In particular, he manages to do something that Toho hasn't figured out how to do: he provides a ton of satisfying kaiju action and fighting without (very often) resorting to WWE-style punching and insane camp to provide those visceral thrills. There's a LITTLE of it, mostly in how the kaiju's personalities reveal themselves while they're fighting, but it's never distracting (hell I wonder if most people will even pick up on those moments), and it just adds to the experience to me.

If you're STILL here, I just wanna touch on a couple slightly more spoiler-y things.
It's not SPECIFIC stuff, but I just wanted to warn you, because everyone's thresholds are different.

ARGHHH, only one week to go!!! I'm both happy for, and jealous of, those getting to go to early screenings!

A 70's Godzilla film with a $200 million budget is exactly what I want to see. My inner child is preparing a very large pile of cocaine for this very special occasion.

All I want to know Jelly, is how the hell did you get an early screening? Are you part of some Critics Association? Were they having a public early viewing in your home town? Or did you bribe your way in?!

Jelly, were Godzilla’s gills a distraction? How did his feet look?
You must show no mercy, nor have any belief whatsoever in how others judge you... for your greatness will silence them all!