^Instead of being a straight remake of Ghidorah TTHM I think this movie is more like the next in a line of the 'monster rally' movies that typically involve a big fight with Ghidorah at the end: Ghidorah the Three-Headed Monster, Destroy All Monsters, GMK, and Final Wars.

^ Godzilla vs. Mechagodzilla II comes the closest, what with introducing new versions of Rodan, Mechagodzilla, and Baby Godzilla.

Don't forget Godzilla vs Spacegodzilla had a 3 way battle with MOGUERA.

I always loved it when certain films featured monsters that weren't part of the title/headline fight, like Titanosaurus or King Caesar. I remember watching War of the Gargantuas for the first time and thinking "awesome; there's a giant octopus in this too!" during the opening scene. It's just cool, like an extra bonus monster showing up out of nowhere to join the fun.

And speaking of "secret kaiju", is it just me or does what little we can see of the face of that second monster in the new TV spot look an awful lot like....

Given how closely the others resemble their Toho counterparts I'm struggling to think of anyone else that seems to resemble what we can see there more closely than he does.
"Absorb what is useful, discard what is not, add what is uniquely your own"
- Bruce Lee

^ As much as we want more classic Toho kaiju in this movie I'm thinking any special guest monsters will be brand new.

Mountain monster is clearly shaped like Kamoebas and even has his roar.

Would be a huge treat to get a surprise TOHO kaiju! I'd probably stand up and applaud seeing Anguiras and hearing his roar on the big screen, lol.

But it will probably be some new monster that nobody will care about or remember when it's over, like the MUTO.

Even in the amazing Gamera trilogy, the weak spot was the new kaiju in the second and third films. The best opponent in those movies was the oldie but goody Gyaos. It's just really hard to make memorable monsters, imo.

I've seen the trailer for this twice now(once in a Dolby Cinema, and once in IMAX, both times before "Alita")and I have to say, I'm not crazy about the "look" of this, each time it looked worse. After the wonderful clarity of "Skull Island", it looks like we're going back to the whole big battle in the dark and rain where details are hard to see scenario. Thought we had got passed that with the aforementioned "Skull Island" and "Shin Godzilla"... Now, granted, this is just a trailer, but as it stands, my enthusiasm does seem to be waning to a degree. Plus, I have to add, the whole "let's make the monsters BIGGER" thing just doesn't seem to work here...the angles shown in the trailer just don't give me an impression of size or scale. Still hoping it will at least be a fun film.

The new T.V. spot is nice, but frankly, I think it is almost time for me to shut it down, and avoid anymore spots or even a third trailer. These unknown Titans are very intriguing, but I do not want to see them in the flesh until I see the movie (same goes for Rodan, Mothra and Ghidrah).

As we get closer to the release date, I know we will get bombarded, so have to keep on my toes, as I did for "Kong: Skull Island".

The third trailer for Godzilla: King of the Monsters will definitely be one to avoid until after seeing the movie. Look at how many of the coolest scenes and action beats were given away in the final trailers for , , and .

It is pretty cool to hear that they're already advertising Godzilla: King of the Monsters on TV three months out.

I wish I had that kind of self-control, but even I have my limits.

I won't watch any clips when those go online because they usually only put those out a few days before the film's release, but I'll likely still watch the final trailer. I can't help it! It'l be right there!

An another note, the cover of the new issue of Total Film looks pretty nice: 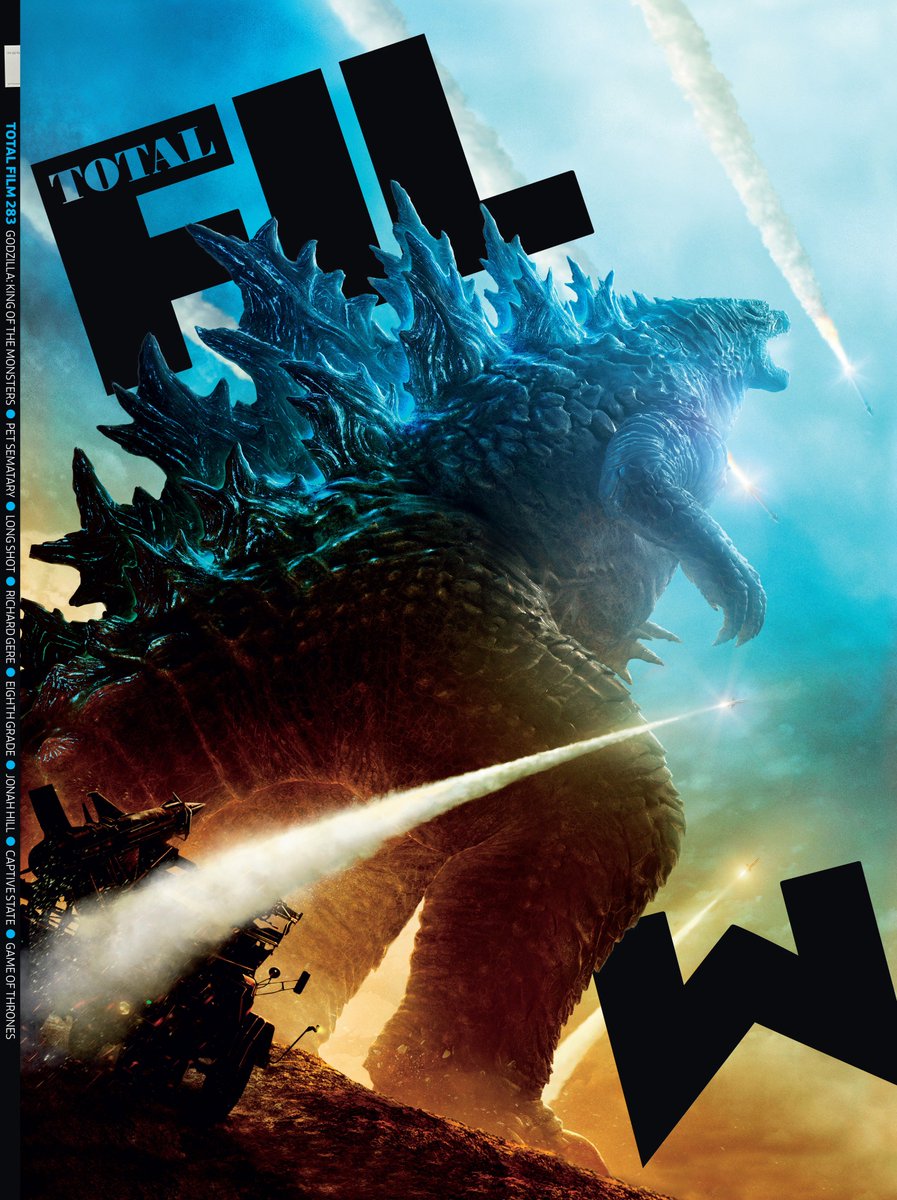 Has anyone spotted trailers for this in the theaters yet? I am expecting something chained to the MCU stuff, just because.\

Getting hard to be patient. Just a few more weeks! Whoop!!

^ Saw trailer in front of Alita.

The texture of Ghidorah's wing in that first pic looks spot-on. It has the same sort of thick shiny look as they do in most of his original appearances. Visually at least they've seriously done him justice, I love it.
"Absorb what is useful, discard what is not, add what is uniquely your own"
- Bruce Lee