I still need to grab me a Leatherback. I wish my local TRU would've picked up the series 2 figures. Now it's going to cost me extra. Hopefully they don't stop with these, and finally give us Otachi and Slattern figures.

I've got to figure Series 5 (seriously where is the news on this already??) has to include the new Gypsy 2.0, Knifehead 2.0 and Otachi. That'd be a hell of a set in my mind. I'd be tempted to buy all three of them.

I also think it'd be really cool if a company like Marmit or something made a vinyl of Knifehead and Gypsy. I'd rather see that any day of the week over a Sideshow statue personally.
FTW

ANOTHER GD and Knifehead? They have already done 3+ of each! Please not until they visit Slattern, Otachi, etc

GD, well, we know for a fact we are getting a 2.0 so it's coming whether you like it not.

I really, really want to see an Otachi but Slattern I could care less about. Kind of boring as a kaiju in my opinion.
FTW

Just got my first Pacific Rim figure in the mail this week - Trespasser. I LOVE it. The detail is amazing and it has just enough articulation to strike a few poses. THIS is the type of line I've been dreaming of for Godzilla. I'll probably be getting Cherno Alpha, my favorite Jaeger, this week.

Just so everyone knows, Toys R Us has a listing for a new Crimson Typhoon and Striker Eureka to be released on June 25.

Am I the only one who would like to see Pacific Rim non-scale Plastic Model Kits from Bandai >_>?

Picked up the Cherno Alpha... LOVE it.

I'm contemplating on getting that battle damage Knifehead. I have the series 1 version, but this one seems SO much better. Honestly, I've never been a big robot fan(outside of MEchaGodzilla) so I don't really care for the Jaegers. The Kaiju on the other hand...

I'm thinking of getting Trespasser. What do you guys think of it? Any common issues I should be aware of?

Trespasser is the one to get. Go for it. Very impressive in hand.

I'd also recommend getting Cherno Alpha too.
FTW

I'm not overly fond of Trespasser but he's a better figure than the Knifehead. Mostly because his head can be moved a lot more.
"We Can't Stop Here, This is Bat Country!"

Amazon has the newly re-issued CT and SE listed for around $25. I'll be buying CT on July 11th for sure. I'm also eyeing the battle damaged Knifehead, but would much rather have a non-damaged one that is properly scaled (unlike the original release). Does anybody know if NECA has been talking about such a thing, I've heard they've been doing such about a new GD release, I imagine with her plasma cannons exposed.

Save $5 each and pick these guys up at TRU for $19.99. The last two TRUs I went to had about a dozen of each - I don't think they'll be hard to find. Picked up a Striker Eureka - I didn't know the blades were separate, so I'll have to glue them in. Mine fall out when I move them.

I imagine FYE may also get them in. I got my Cherno Alpha there for $17.

https://www.facebook.com/necaofficial/p ... nt_count=1
I can hear really well and I am STRONGER than ever!

At last! Scunner has arrived and as always, I've taken plenty of pics to show him off!

I didn't realize Scunner was out. I am planning to skip Axehead 2

Yeah, Axehead pisses me off. Why couldn't they do Raiju or Multavore?

well just to update this thread that new PR kaiju are on the way... 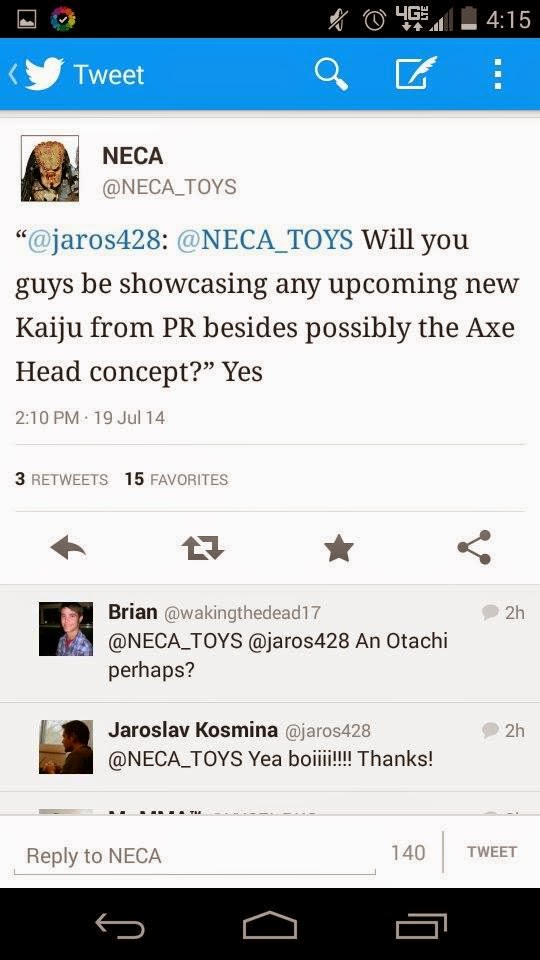 I wonder what will show up next?