Good, solid flick. Not much more else to say. Shame this failed at the box office, but I doubt we would have seen any more "original" stuff.

One of my favorite top 3 Godzilla movies of all time ever. It holds up well to repeated viewings for me, and it's one of the G movies I show to my non-g-fan friends.

This is just one EPIC Godzilla movie. I don't mind the multitude of characters at all! It's really neat to watch them deal with all the situations as they unfold. This movie has conflicting ideologies that work quite well in the context of this movie, and the issues of terrorism and genetic engineering still holds up more than ever. Most of the characters that move the plot along aren't just simple good/bad black/white types, and the true villains have some sass to them (the Bio-Major terrorists come to mind, love those guys). Gondo's a scene stealer, and a pleasure to watch every time, a man's man.

I wish the psychic plot line had more fruit to bare as the series went on. Seems like it peeked pretty early with this movie. I still get chills when those psychic kids all hold up their pictures of Godzilla, who they dreamed would be soon returning from the night before. Just the look on Asuka Okouchi's face as the realization fell it to place!! MAAAAAAAN! The music kicks in and I'm swimming in anticipation!

The monsters were fan-tabulous in design. Godzilla was especially well performed, though I prefer his more polished look in the following movie. Biollante, while beautiful, didn't quite fulfill her true potential. The vines didn't always convince me, and her biting down on Godzilla got harder to look at after repeated viewings. Guess I wish it didn't look quite so rigid!

The only other thing I could grumble about was Erica's spectral face appearing as Biolante dissolved. Very kitschy looking.

BUT WHAT AM I GRIPING ON ABOUT?!? If Godzilla 1984 had atmosphere, this one had scope and urgency. The ultimate Us against HIM Godzilla movie. The script totally sold me on the whole "building dread" thing as the characters reacted to the inevitable return of Godzilla.

But it was a nice balance in these characters that never let this movie get too DARK. Their worry coupled with their humanity, seen through their frailty and resolve and ego. Very satisfying. It amazes me when folks see these characters as one dimensional. Is it just the dubbing? I dunno....

So all in all, F' YEAH!!! to this gem. Just wish it would/could make it to DVD at some point in the same format as the awesome media blasters releases.

One word comes to mind:

This movie is awesome. the characters are great, the story is great, and the effects are some of the best in the series, I think. My only complaint is the score is really uneven; at times it fits perfectly, and at others it's just terrible. Also, I think this Godzilla suit is the best in the series.

This is probably my favorite out of all the Heisei films.

Pretty solid story, characters that I can actually find myself caring about, and consistently terrific effects give "Biollante" an edge against the other films from this era.

The designs for Godzilla and both forms of Biollante are very well-conceived and executed wonderfully. The rest of the effects are very nicely done as well, considerably better than the movies that followed.

I agree with Rodanex's comments on the score. Sometimes it works perfectly, but other times, it's very out of place, especially the Slavic dance-sounding theme previously mentioned.

One minor beef is the whole idea of the Super-X 2 being remotely controlled...it takes a lot of the excitement out of the action sequences that could easily have been there. Though I guess from the standpoint of safety, it makes a lot of sense.

The fact that I've only seen the dubbed version of this movie and still find it to be better than the other Heisei films says a lot about it. It may not be perfect, but it's a heck of a lot of fun.

Burning question: What in the heck does the Biomajor guy say when the Saradian agent shows up? I got "Sh-t, damn! We..." but I can't distinguish the rest of it. It really bothers me. A lot.

I could go on and on about G vs Biollante, but so much of my feelings about this film have already been stated by many others in this thread.

Suffice it to say, this is my favorite Godzilla film. Love G's look. Love Biollante. Love Super-X 2. Love the soundtrack. Love the story. Love the movie. 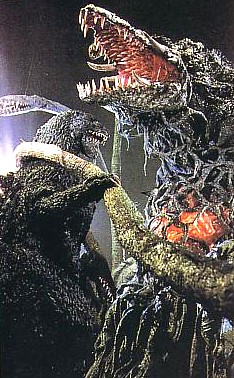 (Pictures this like just make me appreciate how raw, dark, and brutal this film is; especially the final battle. Just awesome)

"Because, if we didn't debate over silly nonsense, we wouldn't be fans.