^ Jokes on you. Godzilla vs. Kong is actually a thoughtful documentary on the Crimean War.

With all the Titans converging on Skull Island, I could see it playing out like Animal Farm, with Kong playing Snowball and Godzilla as Napoleon.
I'm not a hero. I'm not a savior. Forget what you know.

I wonder if Skull Island would be this universe's Monster Island?

Sure glad they didn't put the trailer before JOKER.

Who would want it in front of the highest grossing R rated movie of all time, which is on it's way now to 1 BILLION dollars?

The whole thing is strange. No composer even announced yet. Not a single official still yet.

Just saw that there's not a single pic or article in the Empire 2020 preview issue.

Sure seems like either the film is being delayed or WB doesn't want to waste money and will just dump it with no fanfare.
Last edited by gyaos on Tue Oct 29, 2019 1:36 am, edited 1 time in total.

Even though it had a Comic-Con-exclusive trailer in Summer 2013, remember that the for Gareth Edwards' Godzilla debuted that December, just five months before the movie opened. You can tell it got the hype train rolling because the in February 2014 drew even more views on YouTube.

Conversely, the Comic-Con trailer for Godzilla: King of the Monsters was that same day in July 2018, more than 10 months before the film opened. At no point in that long marketing campaign was the hype for G:KotM greater than it was in the wake of that first captivating trailer. The in December 2018 didn't draw nearly as many views. Even the in April 2019, just a month out from release and timed to play before Avengers: Endgame, still couldn't manage to draw the same number of YouTube views as that first trailer.

Imagine if, like G'14's comparatively more restrained marketing campaign, that first trailer for Godzilla: King of the Monsters hadn't been unleashed until December 2018. I'm not saying it would have given the movie any more staying power with audiences but in that scenario I think it may well have drawn a bigger opening weekend than its eventual $47m domestic debut. If the viewers who were wowed by that first trailer hadn't been given nearly a year to forget what impressed them about it, then G:KotM probably would have mustered at least a somewhat bigger opening weekend and thus a bigger domestic total, even with the same frontloaded 2.31x opening-to-final multiplier.

Even though Godzilla vs. Kong opens in March instead of May, I don't think it needs to begin its marketing campaign any sooner than December. The first long-range tracking for Star Wars: The Rise of Skywalker to open anywhere from $185m to $225m domestic. That would be the perfect time to unleash the first trailer for Godzilla vs. Kong, and then three months later they can cash in on that hype as much as possible.

This movie is already going to face a steep uphill climb to profitability. It's probably going to have a production budget upwards of $200m and it will probably need to surpass Kong: Skull Island's $566m worldwide box office just to break even. That's still the Monsterverse record, which I'm sure all parties were hoping would have already been broken by G:KotM but that certainly didn't happen. In that sense I think Kong's sequel really might be unexpectedly handicapped at the box office by Godzilla's inclusion. After G:KotM failed to catch on with general audiences, this crossover could end up having the smallest opening weekend of the Monsterverse. Considering how all three Hollywood Godzilla films to date were very frontloaded when they played in theaters, as were previous crossover clashes of iconic characters like Freddy vs. Jason, Alien vs. Predator and Batman v Superman, it's a foregone conclusion at this point that Godzilla vs. Kong's box office legs won't be any sturdier. It really is going to come down to just how big of an opening weekend it can manage to pull off. That's why WB is wise to make this marketing campaign shorter, like that of G'14. 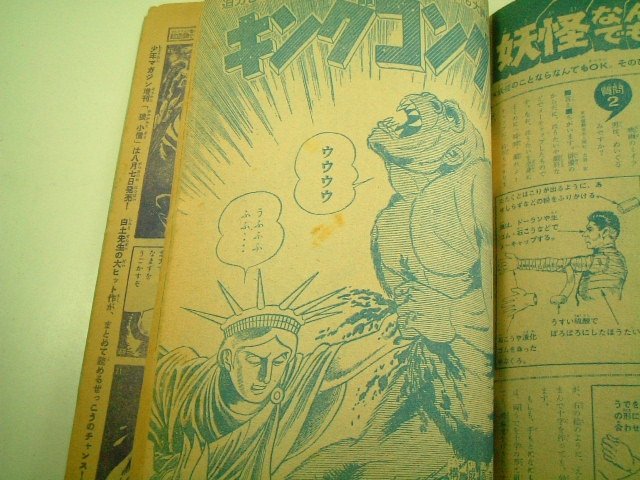 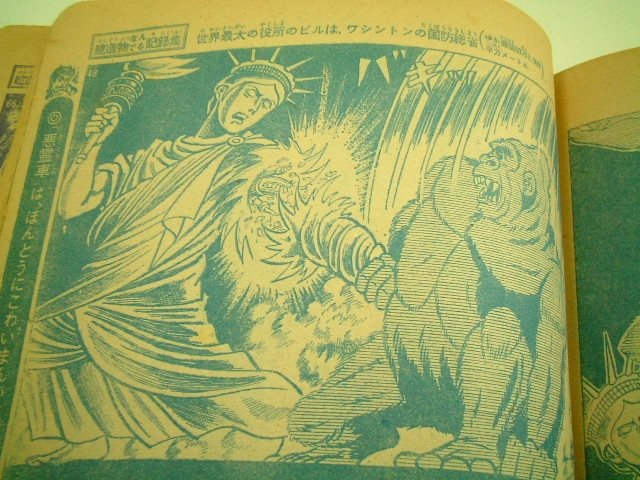 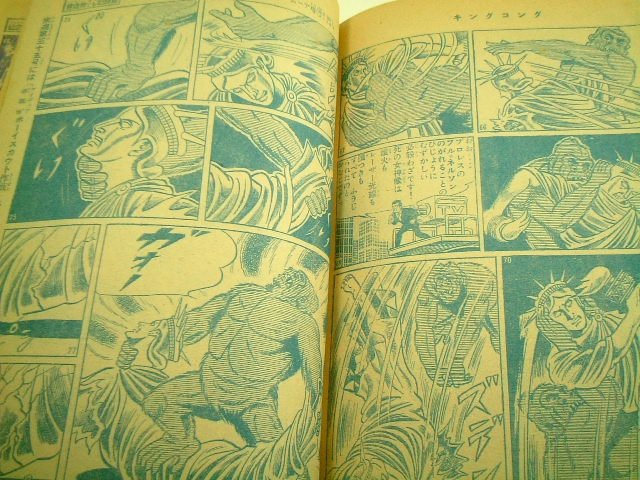 ^ Now that you mention it, Ghostbusters II would have been a lot better if Kong was in it.

Maybe the movie is cancelled. Probably not, though - I'm not allowed to have nice things.
Artisanal Practical Effects & Kaiju Content

Dougherty was involved in the writing so I really have no hope. I can't really imagine how they could possibly course-correct in any way that could regain my interest. I would rather watch another Omori/Okawara/Mimura joint than any Godzilla movie Dougherty touches.

I am curious about whatever Toho might do but I can't say I can see myself getting enthused based on basically anything Toho has signed off on since, uh... 1991? Like I like most of the live action stuff to some degree and obviously GMK is some sort of miracle but so much of it is bland, boring decisionmaking or, in the case of the last two and a half live action films, politically f*cked.

Maybe if they have a stroke or something and hire Kiyotaka Taguchi and Koichi Sakamoto to direct some insane Showa-style full-tokusatsu craziness. That will get my attention.
Artisanal Practical Effects & Kaiju Content

^ Dougherty came in later to do a pass on the script make sure the continuity between the two films was tight.

As for Toho's output since the early '90s; it seems I'm a smidge more forgiving than you! I mean, sure, I think Ultraman and Gamera have been beating Godzilla quality-wise for most of my lifetime, but I still think there are a few solid films in there and the others are at least entertaining for the most part.

No matter what you may think of Shin Godzilla or the anime trilogy the fact that they exist shows that Toho is open to more weird, interesting possibilities than they used to be. I find that exciting. I didn't care for the anime movies at all, but I don't understand folks who said after they were released that they never want to see them attempt a Godzilla anime again. That makes no sense. Sure, this time they licensed Godzilla to an anime studio and let them do what they wanted and it didn't end up great, but the next time they go to a studio and give those exact same parameters we may get an all-time classic! Roll the dice, baby!

Godzilla Vs Kong Is Just 4 Months Out Yet Still No Marketing - Problems?

Godzilla vs. Kong's biggest problem is the general audience rejection of Godzilla: King of the Monsters. That's why we haven't seen a trailer yet.

WB bet big on G:KotM when they started shooting this follow-up in November 2018. That risk backfired big time because now WB has what's likely to be another expensive loss on their hands. It's too late for them to cancel the movie or reduce the budget so now all they can do is try to mitigate their losses as much as possible. A shorter promotional campaign helps to minimize WB's marketing costs. It also bodes better for the film's box office prospects, giving audiences a little more time to forget about G:KotM and less time to forget the first GvsK trailer before the movie opens.

Whether they delay its release or not, the last thing WB needs to do is pull another Justice League by spending a ton of extra money retooling the film in an attempt to "fix" it to appeal more to general audiences. The writing is on the wall for this film's audience reception. Changing the movie won't change that.

^ I still think that next holiday season's lightness in terms of blockbusters is a good opportunity for a space the movie could flourish in, and as you mentioned; it gives ample time for the bad taste of the previous movie to have worn off and better emphasize the iconic nature of the two opponents as the draw rather than the quality of the previous installment.

^ WB does have Denis Villeneuve's Dune set for December 18, 2020. That seems like another one that's doomed to be too expensive for its very limited audience demand no matter when they open it. Maybe Godzilla vs. Kong would be better poised to become the family moviegoing consensus choice over that frame than at any point in the Spring or Summer. Having Christmas Day as its second Friday followed by two weeks of people being off from work and school (just like The Force Awakens in December 2015) could even prevent it from being as frontloaded as prior Hollywood Godzilla or crossover clash films.

Well After Months of rumors...I guess we can finally change the release date on the thread title.... BOOOO!!!!

I'm not shocked it happened. I am a little disappointed they waited so long. I was *almost* hopeful it was actually going to come out in March, and hoping for a teaser soon...Oh well...
There are no more good TV Shows, only ones that haven't disappointed me yet.

... I mean, I assumed. It was either that or they had secretly sold the movie the Netflix!

Gives time to roll out the merchandise and whatnot, build buzz, and most importantly: have the sting of the last movie wear off and sell the movie on the spectacle of two iconic characters squaring off.