Given that the Monsterverse is all-but guaranteed to end and we're getting what was planned out of it and nothing has a chance to be canceled, I honestly don't care if the movie only makes money off the tickets I'll be buying for it.
Gills.

Tracking is really difficult, and is more often than not inaccurate. I'm not going to say KotM is going to be a monster hit (no pun intended), but with 10 minuets being shown before IMAX showings of Shazam this weekend, I'm sure positive buzz will come out of it. I expect it to do fairly well.

If the next 2 films are all we get, then that is fine...However...If this does to turn out to be successful enough to generate another film post G vs K, I'll gladly look forward to it.
There are no more good TV Shows, only ones that haven't disappointed me yet.

I can remember all the negative press saying that the 2014 movie was going to flop then it turned around and became a big hit
ROBOT CO-OP IS GAMING COMEDY
https://robotco-op.com/

Yeah, the buzz for this feels a lot... err, "buzzier" than for Kong and Godzilla '14. I don't see it underperforming compared to those two.

Remember the doom and gloom predictions for Skull Island, which had a ton of direct competition?

Christ; stay off YouTube if you want to avoid the many new TV spots for this movie. They're all popping up in front of the videos I'm trying to watch!

Yes, I think it is darn time to batten down all the hatches and proceed with caution!

I watched a couple of the new TV spots, and I hope the movie isn't full of dumb comic relief comments or whatever you want to call them. I'd been really happy with everything I'd seen until I heard those.
The future is big, sparkling warble of superclean and we should endevour to do our best to wash our feet by it.

^^ I like to think that's just from cramming a bunch of footage into a 30 second spot - some are more action oriented, others comic relief, etc.

As for spoilers - I don't mind watching trailers and TV spots and keeping up with merchandise (that's part of the fun), I've just never been one to go out of my way for spoilers as in scene descriptions, full plot synopses, reading drafts of the script. I've never understood people who do that - and go out of their way to spoil others.
~ Tyler 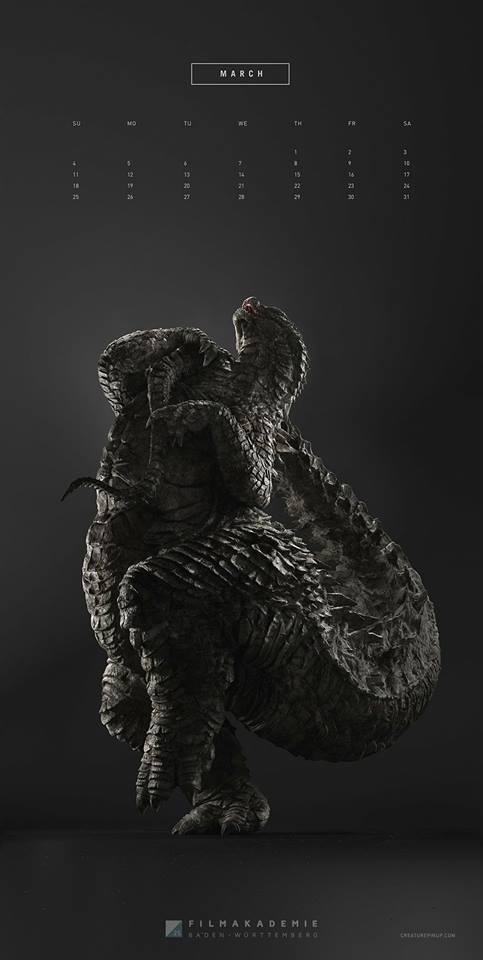 I've seen a bit of fretting and doom-and-gloom from folks about box office tracking and... guys? It doesn't matter.

We're getting two huuuuge movies. One is basically a modern Destroy All Monsters and the other is the rematch of the century. If they bomb (and they probably won't, at worst they'll just kinda break even) then all that means is that Toho, chomping at the bit to make more Japanese Godzilla films, will have a new one of their own out by 2021 or 2022. If that one bombs? Well, they'll wait a few years and try again because Godzilla is always gonna be on his way back to screens because, maybe more than any other popular character from the 20th century he's in the special position of being a mascot for both an entire industry and in particular for a major, established company that owns him. We're going to get Godzilla movies for forever, or at least for as long as Toho is a company, and probably after that as well (although maybe not as regularly).

What I'm trying to say is; Godzilla is a Japanese franchise and even if they make a dozen MonsterVerse movies Hollywood versions of the character are still an aberration of the norm. That's not a bad thing, although the fact that Godzilla is a foreign franchise is a part of its innate appeal to us non-Japanese fans, but what I'm saying is just enjoy the aberration as it's happening. In 2013 and 2014 I thought Pacific Rim and Godzilla '14 would be the only major Hollywood kaiju films I'd ever see and I wanted to make sure to enjoy what I was sure would be and all too brief moment in the sun for my favorite genre. Now it's 6 years later and we're still on the streak. Enjoy it! Have fun y'all.

It'll neither bomb nor be a billion-dollar movie. It'll settle out just fine and all the fretting and worrying won't matter and all the posturing and chest puffing will calm down.

It also doesn't matter. The only way this ISN'T just going right back to Toho is if the movies are Avengers huge and they won't ever be. and the only way Toho WON'T make more movies in the immediate future is if they hardcore bomb, and they won't do that either.

I'm with lhb and just enjoying the ride overall. 15 years ago we thought this franchise was all but dead. I may have only liked one of the past 5 Godzilla movies (wow,that's sad) but I'm trying to enjoy as much of the build and hype and ride as possible
Gills.

I agree, we need to enjoy what we have in front of us and not worry about what is beyond what is guaranteed. I’m old so I remember the first time seeing anything new about Godzilla in a magazine. I was amazed at how much cooler Godzilla looked since I’d last seen Godzilla 1985 in the theater. It was a promo shot for Biollante. Thankfully I had HBO at the time and got to record it since we had no new VHS copies headed our way. Then all I could do was see Japanese movie mags showing all the Godzilla I couldn’t get until the internet allowed me to get the whole collection.

Now we have it made, all the Godzilla we want and more on the way in what are shaping up to be epic movies that will validate our fandom to the masses that yes....Godzilla is cool. Funny thing, much like Star Wars, I had no idea how many of my friends were closer nerds like myself, years later not giving a crap what people think. It’s awesome.

In the end, if all we get are these last two movies, be happy. Thing is, like it was said, Godzilla never goes away, he will come back right when we need him to.
You must show no mercy, nor have any belief whatsoever in how others judge you... for your greatness will silence them all!

Man I’m 46, could care less what others think, though it was hilarious when I posted something on Facebook about KOTM and all these guys were like “That’s so badass! Love Godzilla...” LOL

Now Trekkies??? Well those guys are dorks! LOL I kid.
You must show no mercy, nor have any belief whatsoever in how others judge you... for your greatness will silence them all!

We're getting some kind of Game of Thrones cross-promotion this weekend. Besides the Super Bowl, that's as high profile as you can get!

Intelligently they have given away very little with all of the trailers a second here or a second there an additional little glimpse of what we’re going to be in for but in reality each trailer is kind of built on the last in different ways using the same footage. I suspect that with the trailer that’s attached to Game of Thrones tomorrow, we will see in all likelihood a little bit more of Charles Dance and his character Get that massive crowd into wanting to see him and Godzilla. Each instance they have placed the trailers in front of huge audiences and took a wide approach to who they were marketing to. So they’re doing it right not giving away too much showing enough sizzle that people are buzzing about it, I know a lot of people who are not fans of the genre Or Godzilla for that matter are suddenly thinking and saying wow this looks incredible. So what I suspect will happen is that we will have a good opening weekend, bolstered by it opening the same day in other markets including China and India and then word-of-mouth will take home and this should have much better legs than 2014 and skull Island.
You must show no mercy, nor have any belief whatsoever in how others judge you... for your greatness will silence them all!

^ I agree with most everything you just said, mrbluehair, but in fairness to Kong: Skull Island, its domestic box office legs were totally solid. A 2.75x multiplier from a $61m opening weekend for a $168m total is A-OK for a big-budget tentpole and it's really good for a monster movie. A similar domestic performance would be perfectly fine for Godzilla: King of the Monsters, especially if it can match or top Skull Island's $398.6m international total which is very doable if it's a crowdpleaser.

has a hi-res look at WB's new main poster for the film: 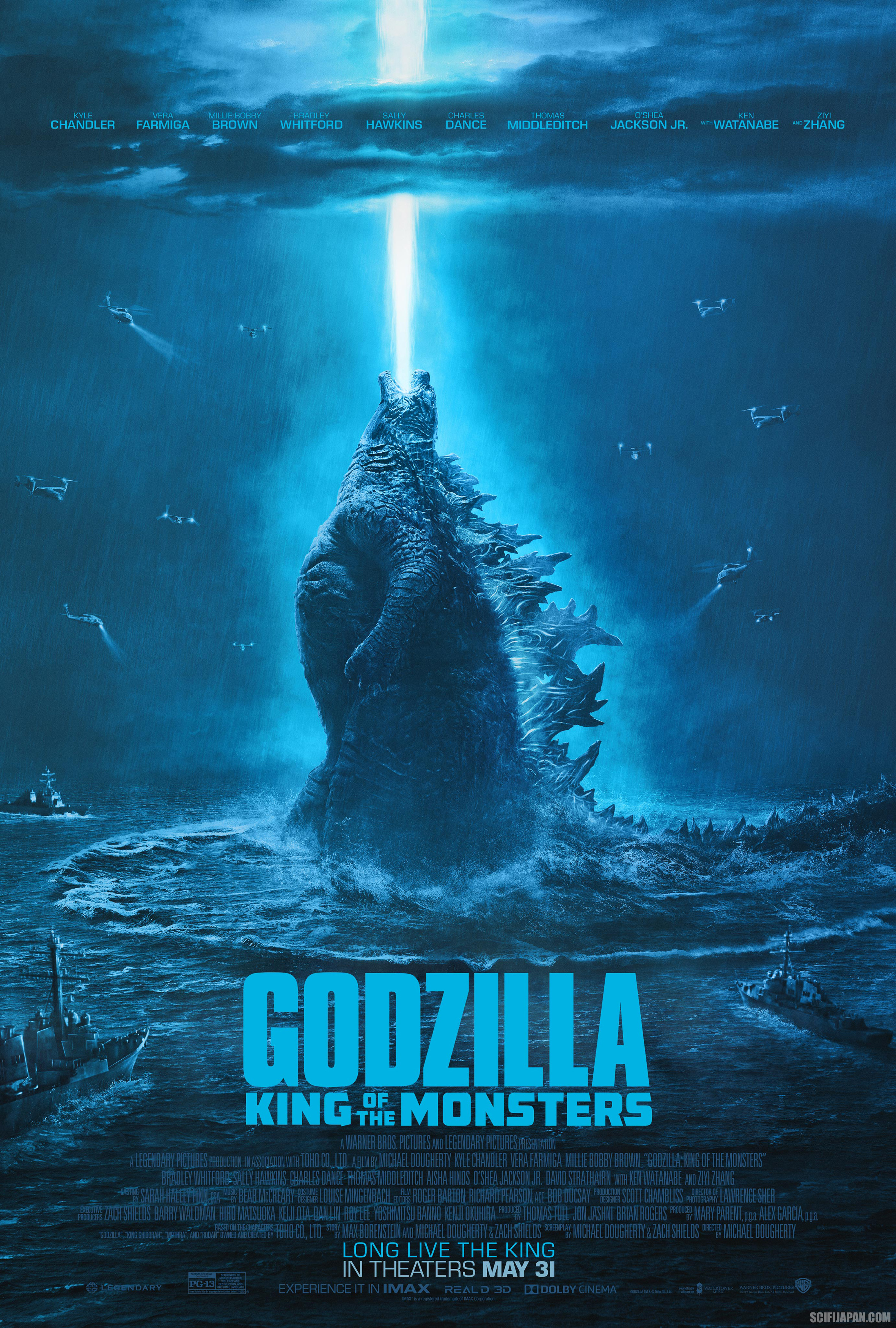 Oh it wasn’t a slight on K:SI in the least, I think that they are learning how to market the movies better and believe that the legs on this movie will hopefully outperform Kong which would indeed be a good thing.
You must show no mercy, nor have any belief whatsoever in how others judge you... for your greatness will silence them all!

The footage tied in with Game of Thrones was the same as the Shazam! footage, just an alternate venue to check that out.

People seem to be jazzed about this trailer, though. That's cool.

KG's heads are a bit photoshopy, but nevertheless I quite like this Chinese poster! 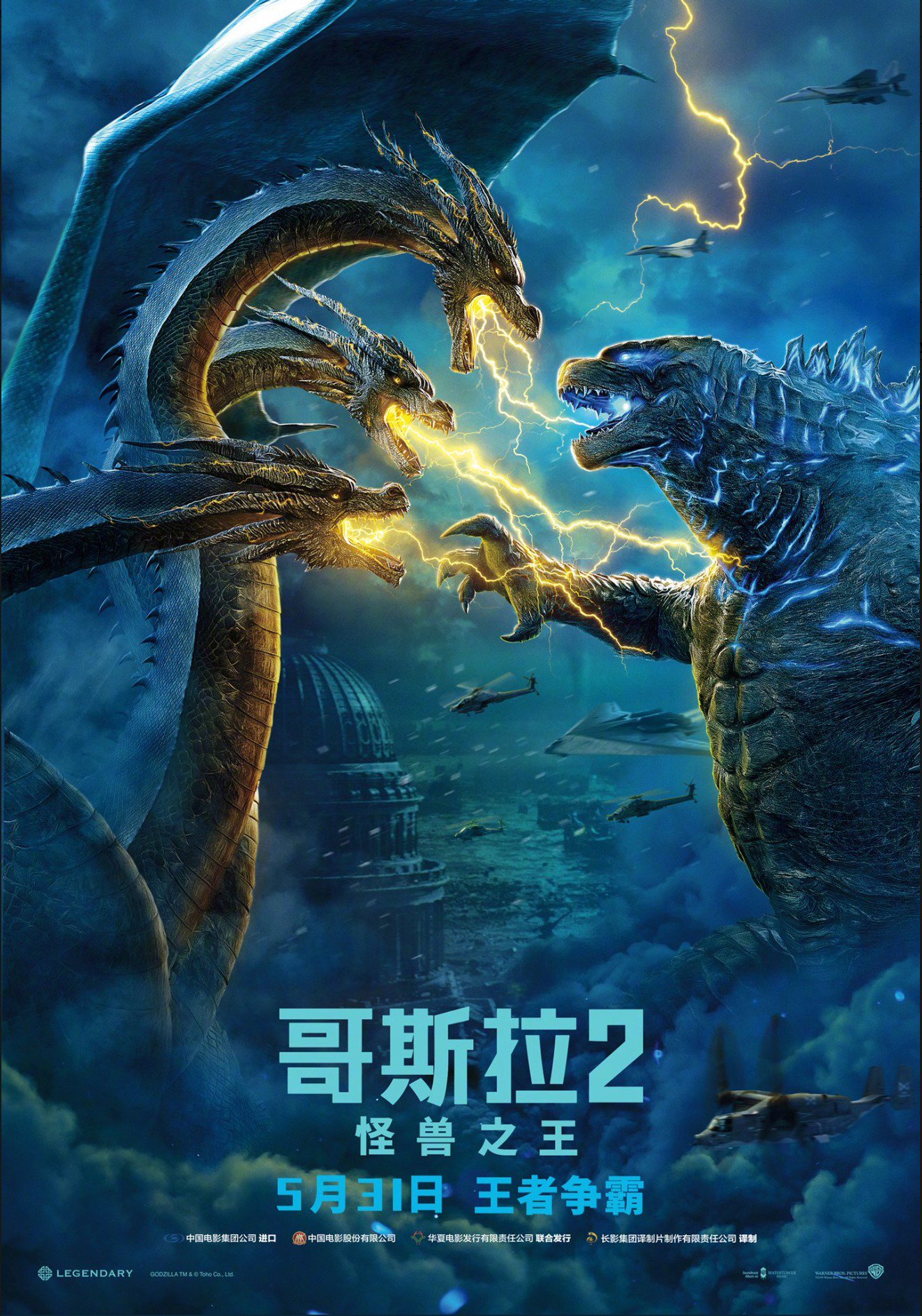 Still looks great, however the breath is still more of a battering ram, than an actually burning/penetrating weapon.
There are no more good TV Shows, only ones that haven't disappointed me yet.