Fantastic job on the Bandai '91 Ghido-Goji Godzilla Figure! I'm glad to have it in my hands!

There is some amazing work in here!

Do you airbrush this stuff

I work in the auto industry and have painted more then a few cars, considered giving some airbrushing a go on a couple figures but never got around to it.
You might have inspired me to finally try!

Catching up the KZ thread updates for another more recent commission,
this one by King_Ghidorah as he . 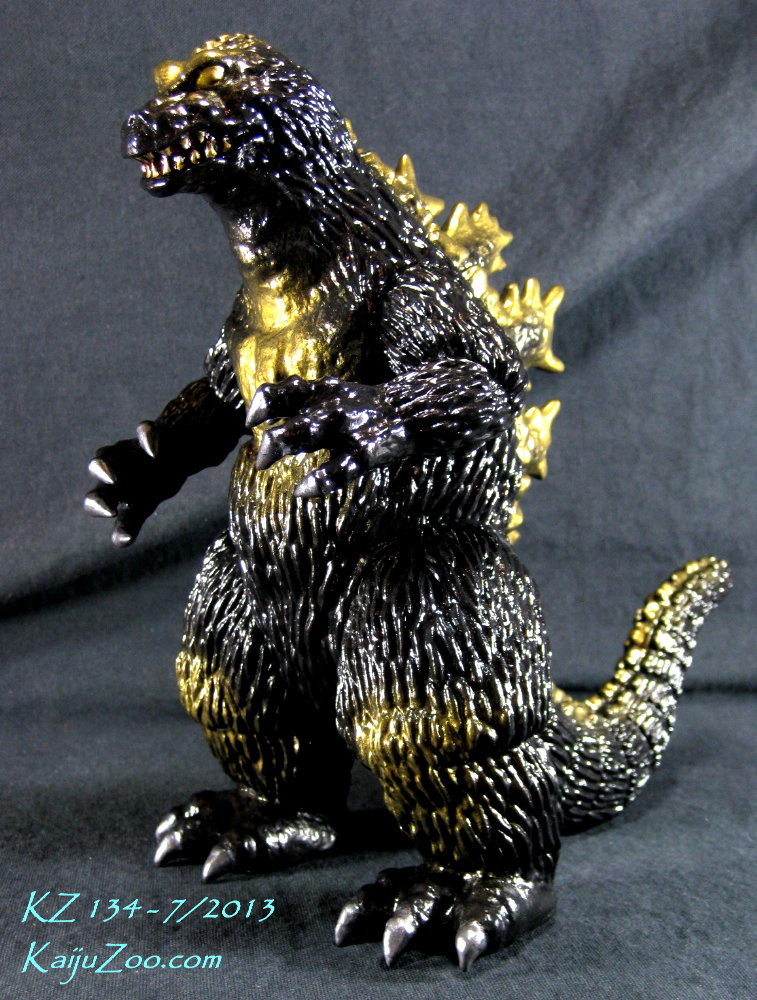 Def think the G'62 suit is in contention for the best ever!!
Jonee
KaijuZoo Toys - Where the Monsters Live
http://www.kaijuzoo.com

I was recently very happy with the treatment Yoe & IDW gave to the Ditko Gorgo comics, coupled with the recent fan viewing of Gorgo (viewtopic.php?f=39&t=19950) and i found myself wondering why I don't have the M1 Gorgo figure... so on a hunch I asked Jonee if he just happened to have one he'd be willing to sell.

Turns out he had the set (Mama and baby.. or Gorgo and Ogra for the purists) that he was willing to sell.. but the set was the unpainted flesh variant. So i knew I wanted paint on it, but i had no earthly idea for a concept, so i started picking and choosing colors at random... the eyes in the movie stood out a lot, but the body was muddy and inconsistent scene to scene.. so i started picking elements from the Charlton Gorgo comics.. all with a high degree of uncertainty and a lot of the "if that sounds stupid let me know" kind of instructions. So Jonee said he liked the idea of the Ditko tribute and would incorporate the eye from the movie that i liked and had a few other clarifications and suggestions... but as soon as I saw his response his words hit me... Ditko tribute. So what followed was a lot of sending pictures of panels and covers back and forth. Gone was the movie eye, front and center was the white eye with the red iris and the black pupil. We opted for matte finish as that would be more in the spirit of the flat printed page. I suddenly found myself very excited about the concept, so much so that I had some doubt as to whether the final product could live up to my expectations. Then before Jonee shipped me the finished figures, he sent me a preview image and i was blown away with how awesome they turned out.

Now, i often will say that pictures don't do a certain figure justice, and that's partly because i use my lousy camera phone to take the pictures... but even Jonee's pictures didn't do the figures justice. They turned out incredible and i really couldn't be happier. Anyway, here are a couple images I snapped.. maybe Jonee will put up some more, but they won't do it justice, these things are spectacular. Overall the whole process was great, I felt proud of the figures of when i saw them because even though Jonee did 99.9% of everything, I felt like i had been an active part of the collaboration and that in some way I had helped bring these figures to life.

Sneak Peek - KaijuZoo Zeem Godzilla '64 Commission under development.
This MONSTER is five feet long and 3.5 feet tall! The picture shows the dry fitting of the tail parts prior to glue-up and joint detailing. More pics as the project continues ... 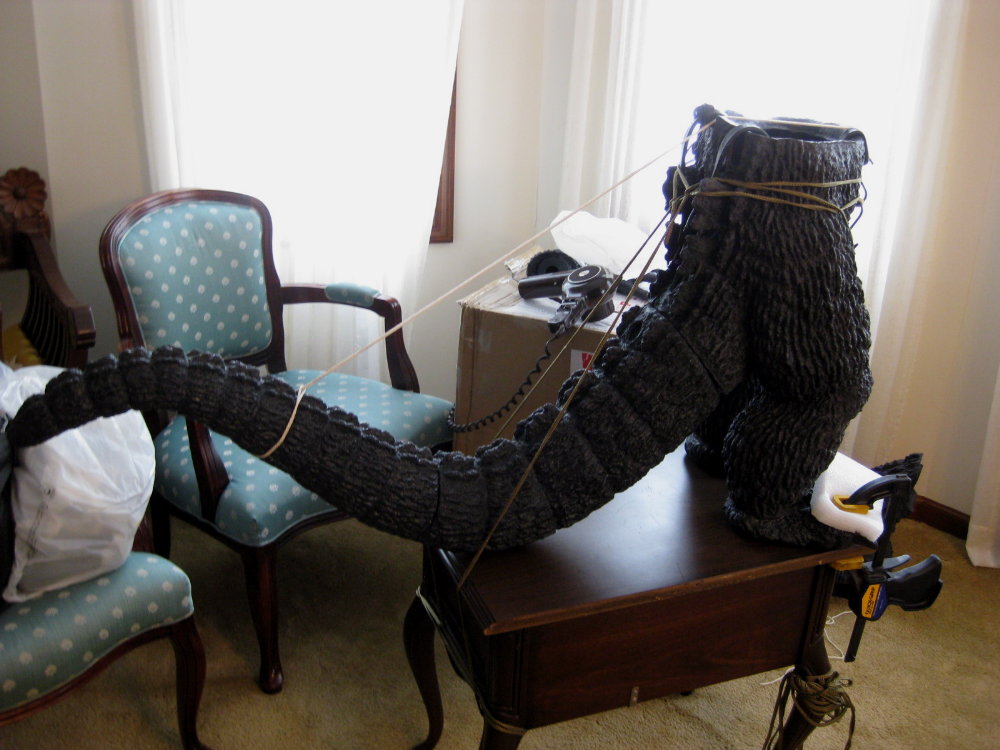 I can't wait to see more work on the Zeem G 64. I almost bought one a couple times, but I wasn't satisfied with how it looked from the few pictures posted on the internet to spend $1000 +.
The future is big, sparkling warble of superclean and we should endevour to do our best to wash our feet by it.

So now I will have much more time to devote to my love of creating things as KaijuZoo whether they be kit building, painting or woodcarving, etc.

My crew at the office gave me a great sendoff with a team dinner with the VP and other management. That was cool enough but the surprise afternoon cake ceremony this week was tremendous as you can see from this photo: 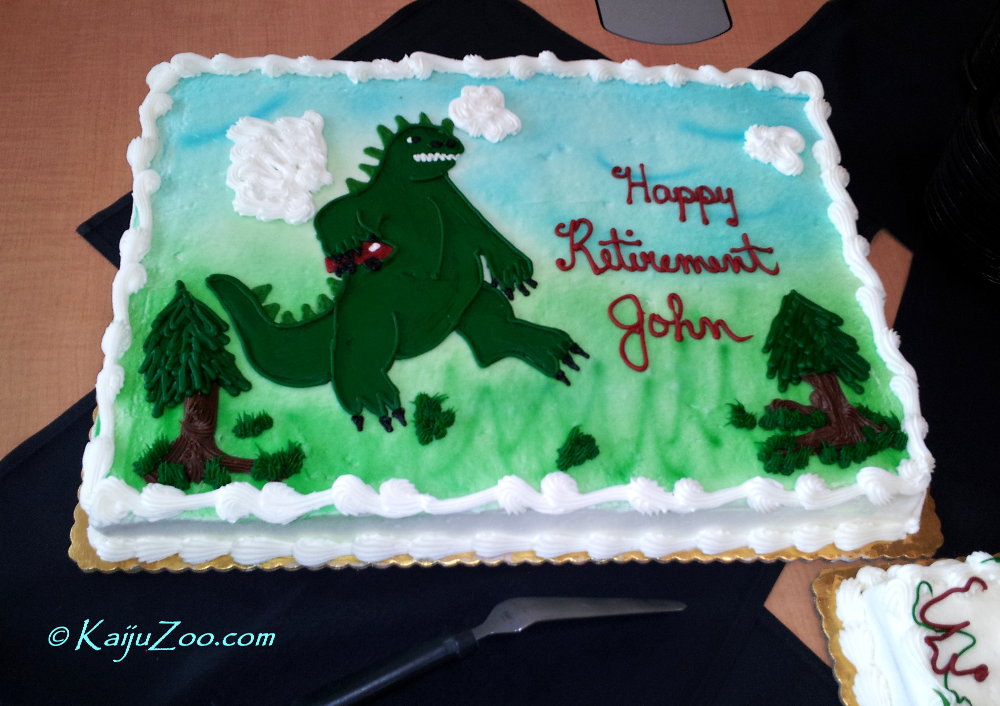 Congrats! What kind of woodcarving do you do?

Just wondering...have you had any inquiries or anything about commissions for G'14 stuff?

Congrats on the retirement!! How's that Zeem Godzilla 64 coming along that you were building for someone?
The future is big, sparkling warble of superclean and we should endevour to do our best to wash our feet by it.

Just curious, how much would it cost to modify both six inch Bandai Creation Gigans (Showa and 2004). I'd want Showa to have 2004 colors and 2004 to have Showa colors.

Sorry to double post, but I also have a Showa X-Plus Gamera that is missing 3 of its front teeth. I do not have the teeth (was bought this way VERY cheaply at G-Fest in 2004). Is there anything you'd be able to do to fix?

Sorry to have missed seeing some of the previous posts. I went home in April for the family reunion for two weeks, then Mom went to the hospital several times but passed away at 88.5 years. Thankfully she went quickly and peacefully with her family at her side. We had a wonderful memorial service! I stayed with my sister for 2.5 months helping her with the estate and getting the house ready for sale next month.

Pending commissions like the above Zeem G'64 have been slower in progress due to the above circumstances. Work will pick up later this summer.
Jonee
KaijuZoo Toys - Where the Monsters Live
http://www.kaijuzoo.com

I am impressed with your work and wonder how I never noticed this thread. I seriously would love to photograph some of your commissions.

I just wanted to thank you again for my latest commissions. You did a fantastic job on my Paradise Gargantuas kit, the Bandai GMK Godzilla and transforming my mini Megahouse Gaira fig into a Sanda! As usual everything turned out incredible.

Check out these links for pics, since I could not figure out how to attach mine. If anyone wants more pics, please feel free to PM me.

Here are a few pics and customer feedback for my latest commissioned work! 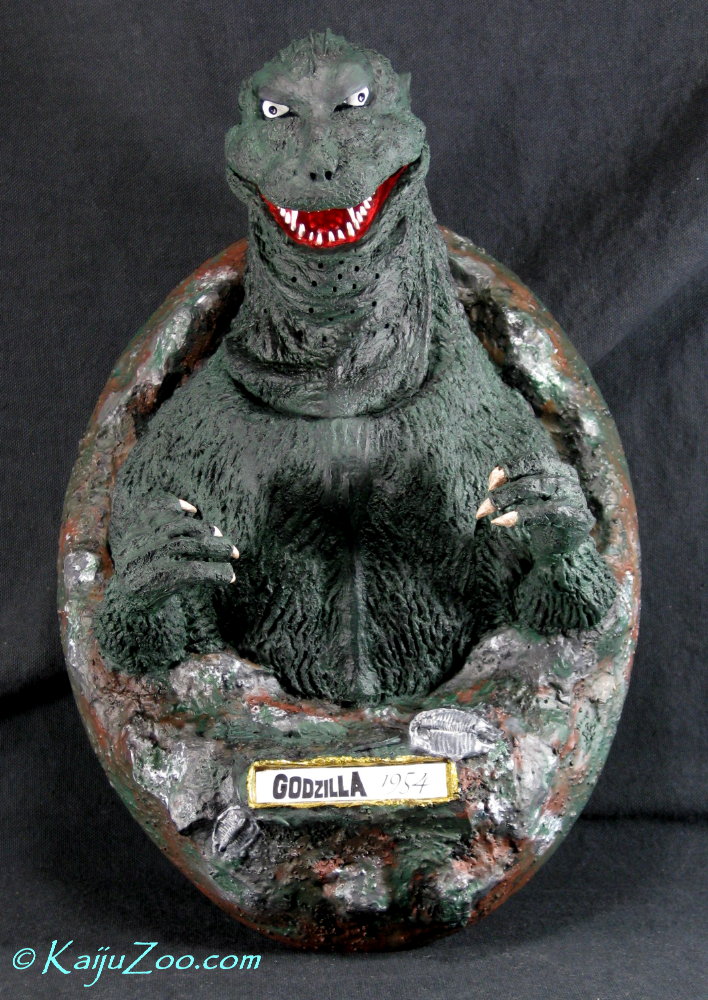 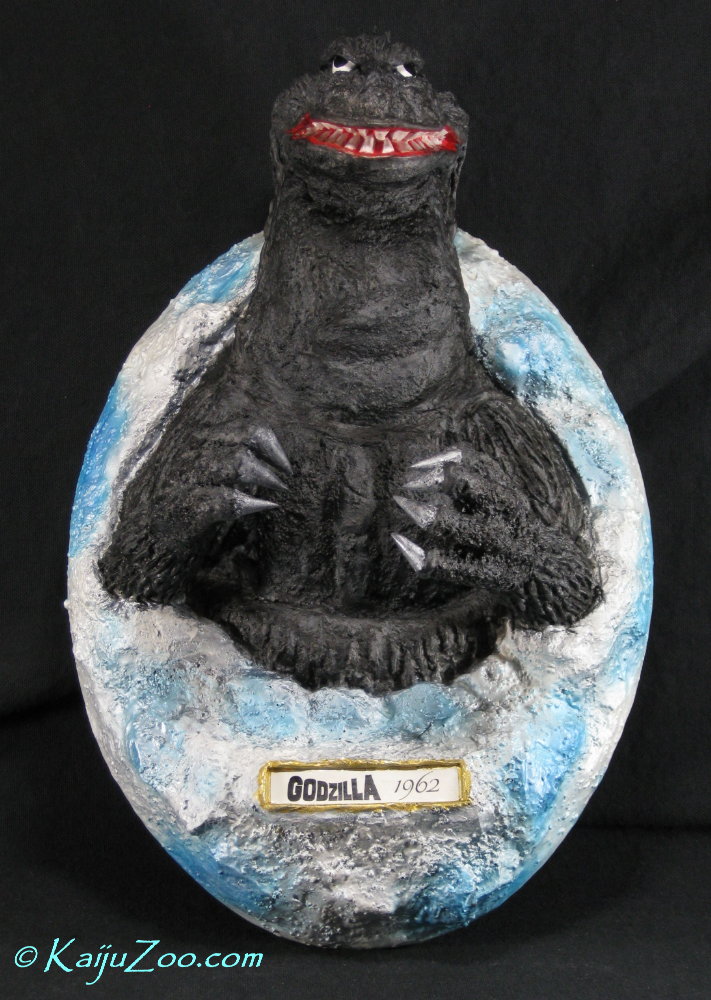 "The Zilla plaques arrived today, and omg! They are incredible!!!! So detailed
and well done, they look amazing, thank you so much!" - M.E. - 12/2014
Jonee
KaijuZoo Toys - Where the Monsters Live
http://www.kaijuzoo.com

KaijuZoo Build-up and painting commission: Paradise Gargantuas Set with Base 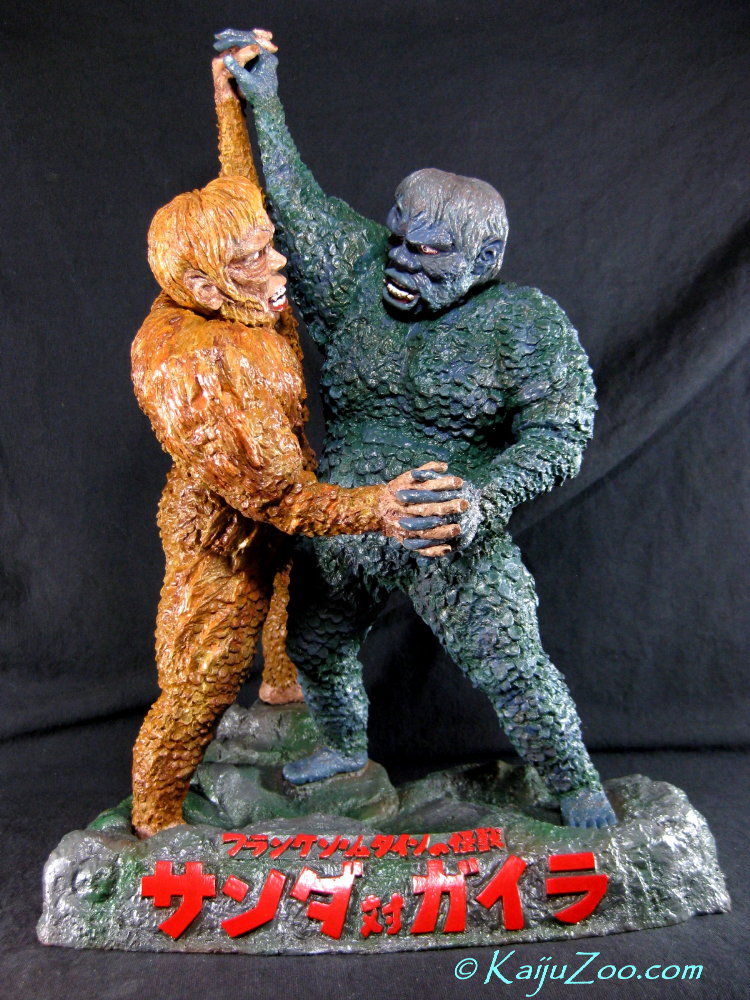 Hey Jonee,
I got the package yesterday, thank you. The Gargantuas model looks incredible! It is definitely now one of the highlights of my collection. The GMK Zilla and Sanda fig look fantastic too. Getting all of these new goodies really made my day! - R.G. 12/13/2014
Jonee
KaijuZoo Toys - Where the Monsters Live
http://www.kaijuzoo.com