I'm all about that Manda, and i have the rest of the set, so at this point i'd probably get Mothra larva even if it were a seperate release just for the sake of completion 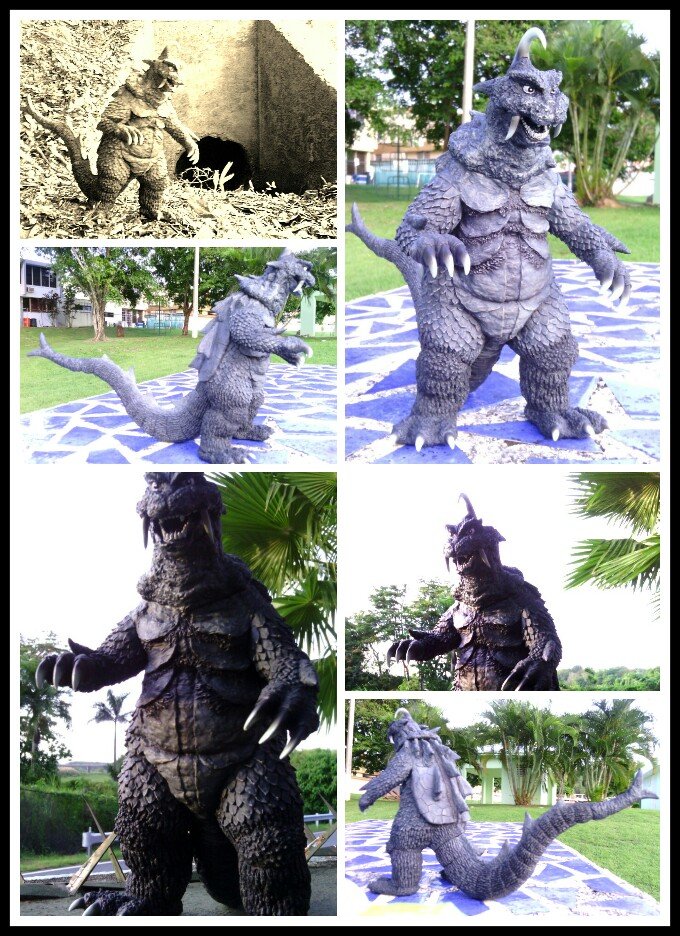 My first unboxing. Figured it was best to do a pic collage instead of a vid to...GASP!!! intake the detail. And he only came with one twist stick to unwrap. 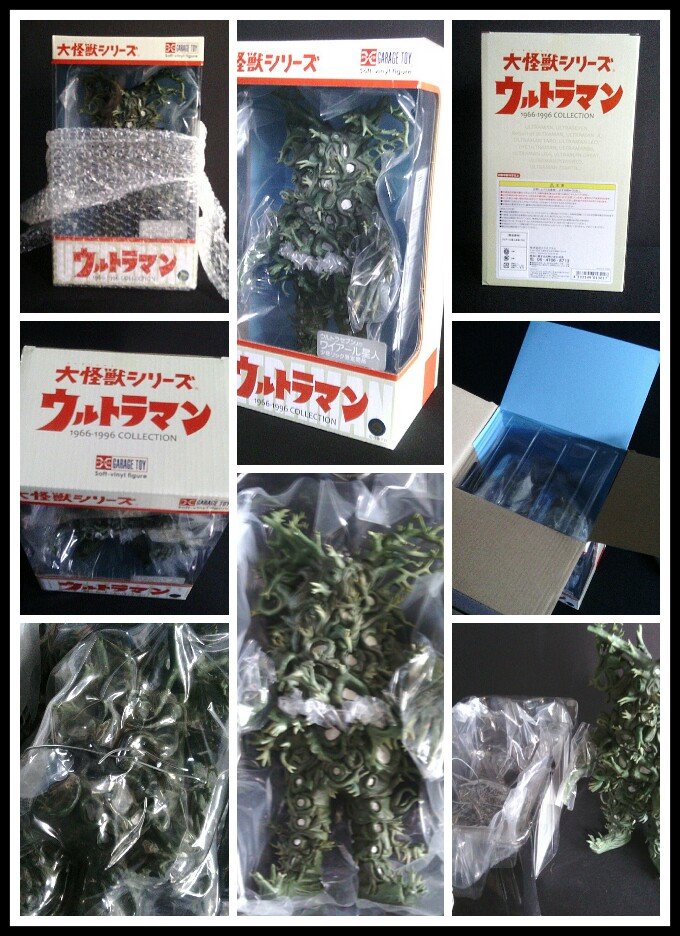 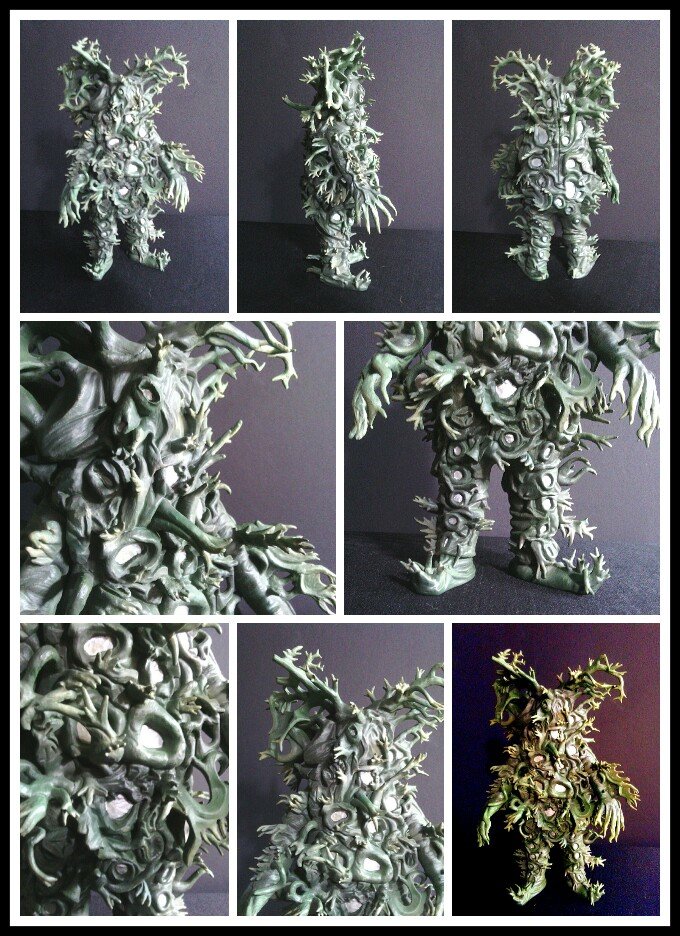 Any bets on what X-Plus shows at Superfest next week? I'd say we see a painted version of Legion and Destoroyah, which have both had some images circulated, the last few festivals have coincided with a Sakai sculpt announcment, so maybe another 30cm Heisei Godzilla?

klen97, that DESTROY ALL MONSTERS collection of yours is downright epic. Now you just need a backdrop of Mt. Fuji... 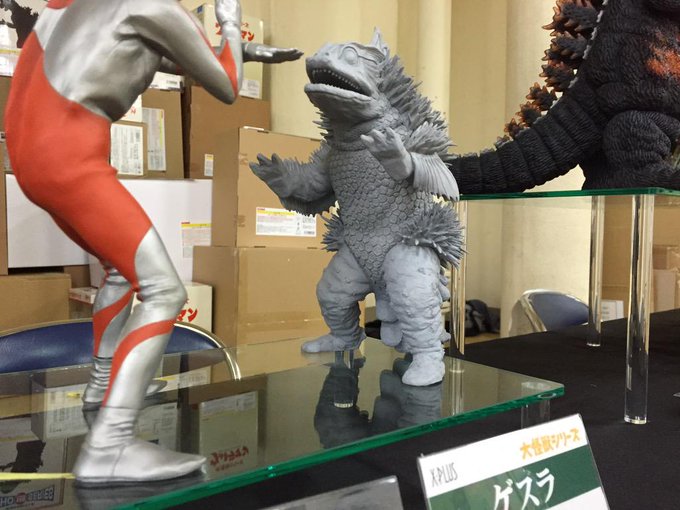 Destoroyah looks nice. I ordered the ricboy version for the Aggregate, but it will be in resin, so I'm already worried about it breaking in shipping.

I got the ricboy Desugoji despite my reservations with the head sculpt... I was right to be concerned. The head sculpt is way too soft (like it was made with an overused mold) and the paint job is sloppy. The finish level also looks lesser on the head. It's kind of a mess, which is even more obvious when you use the light up feature and it bleeds through. Still better than a Bandai release, but not up to X-plus standards.

Oh wow. Whats up with these Desugoji and the chewy heads? First Diamond with the Burning G bank, now Xplus hops aboard.

I can only hope a 30cm version to be the epic sculpt.
AVAILABLE NOW! ILL GREEN HADOSHI ART FIGURES HANDMADE AND HANDPAINTED!

I think the Gigantic Desugoji is pretty epic... i just wish it had a light up feature. I thought i would be able to add my own, but translucent vinyl has another layer of black vinyl beneath it, so no light would pass through.. Speaking of Gigantic series, i got my shipping notice for the Gigantic G2k

The Aggregate is pretty big. Look here next to a 12oz bottle. 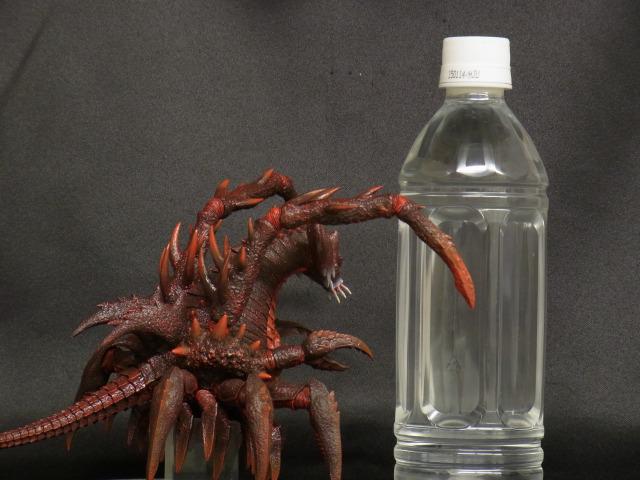 Why they would make this in resin is beyond me with all those extensions.

X-Plus is reissuing the 25cm Rodan (64).. i guess its for the DAM crowd.. hopefully they retool it for balance, i have no issues with the 56 Rodan, but i can't keep this figure upright without supports.. By all means BRING ON THE BLUE!

Kaiju Addicts has an interview with X-plus. It's definitely worth a read. Also Heisei Mechagodzilla confirmed
http://kaijuplanet.blogspot.com/2015/11 ... amoto.html

For anyone who ordered the X-Plus Adult Destroyah from HLJ, when I was trying to get it shipped to the USA, the only option it would give me in the checkout was for ridiculous shipping from FedEx at 18670 yen. I contacted HLJ directly and they were able to get it shipped by USPS by itself for a little under 9000 yen which doesn't show up in the system for some reason.

So if you're getting a ridiculous shipping cost estimate from HLJ, may want to try contacting them first before paying.

Actually, they delivered it to my home on 12/29, but I've been out of town for the last few days.

Well it finally arrived. Here are some photos:

As far as the Baragon figure goes....I'm really digging it

This fills one of the few remaining holes in my collection (Showa Baragon).


As far as which Xplus Baragon figure is the best....I think that depends on the collector and what particular type of Showa Baragon they're looking for, as some are dead set on the Frankenstein vs Baragon version, while others prefer the seldom seen DAM incarnation. For my tastes, it's a toss up between this one and the Xplus 25cm Baragon crawling version (I'm not a fan of the other 25cm standing version, as scale-wise it's a bit too tall in comparison with other 25cm figures).

Now onto the Varan figure:

Honestly, I could not care less about this one and it does nothing for me. I've never really heard anyone who yearned for the tiny Varan prop from DAM to be made in figure form. As far as I'm concerned, the regular 25cm Xplus Varan figure (hell, even the amazing Marmit MH figure Varan) are much more ideal and impressive for those who covet a solid "DAM set". Nevertheless, if one just "has to have" the small DAM flying Varan prop and are that particular about having every kaiju figure match their DAM incarnations, then this set would definitely be right up your alley.

Here they are in comparison to a few other Xplus figures I own:

The Baragon figure kicks major ass and I like the sculpt a lot...captures the DAM version very well and unlike the other standing Xplus 25cm Baragon figure, this one scales very nicely with other Xplus 25cm figures. However, I do think that it really sucks that I had to shell out significantly more money (20,000 yen after shipping and handling, or about $200) due to having this Varan flying prop figure being saddled onto it That's one thing that really annoys me about these "sets", as I passed on the terrific 25cm DAM Manda figure (I've been very keen on seeing a quality whisker/hornless-less Manda figure for years) due to it being saddled with a Mothra-larva w/ rock stand that I have no desire or need for (there are tons of quality Mothra larva figures out there already) and was not willing to shell out nearly 70-80$ more as a result.

If you're a completist and "must have" an *exact* DAM set down to the most minute detail, then sets like this and the Manda/Mothra Larva should suit your needs perfectly. However, if you're solely interested in having a quality Showa Baragon in your collection, then I would recommend you look for the 25cm crawling Baragon, or if by some miracle a dealer would sell this particular Baragon figure individually sans the tiny Varan flying prop.

Well said Ebirahsmeg1 on Baragon and Varan. Much like you, the Varan was mostly "meh" for me. Just something else to throw in the box with Baragon but I can see the line of attack X-Plus was going for. They wanted to capture the scene/photo will all the Kaiju at the base of Mount Fuji.

As for the shipping ordeal with HLJ, yea the shipping is crazy with FedEx. I bought the GGMK with them and they wanted like $160 for shipping or something like that. You have to get in touch with them and tell them you want it shipped EMS. I haven't used HLJ in a while but I am pretty sure there is an option to request EMS over FedEx, which is set by default at check out. I could be wrong. Its been a while.
Buy Vinyl, Fresh Vinyl!
www.freshvinylhq.com