The producers of the upcoming Star Trek prequel confirm during Comic-Con that lead character Michael Burnham is the half-sister of Spock. 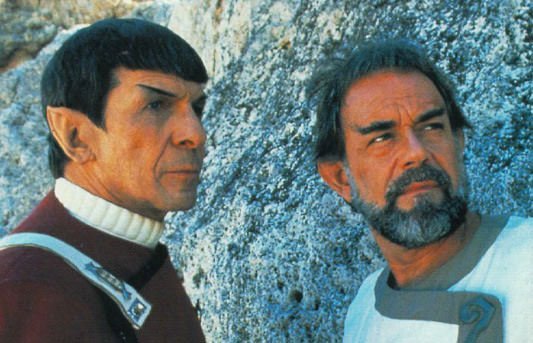 Spock's other half-sibling, Sybok -a full Vulcan, was not exactly a stable individual...
Who knows what evil lurks in the hearts of men?

Re: Star Trek:Discovery vs The Orville

^ That actually makes me want to watch The Orville

I remain cautiously optimistic. I mean Galaxy Quest was a great parody. But I figured Orville was just going to be Star Trek with Gutter Humor (ala Family Guy) Infused. If he actually tries for something more intelligent and up beat, it could definitely be way more popular than the current Star Trek series.
There are no more good TV Shows, only ones that haven't disappointed me yet.

Well thanks to sports game derived schedule jumping I only caught the last half of Discovery, which was enough to convince me to not pay to see any more of it. In fact I really can't see myself watching it even if it were on the regular network. The main character commited one act during that second half that made her unfit to wear a uniform, regardless of any "redemptive" acts she may perform later. I find myself completely uninterested in anything else she does, and as she is the focus of the series, uninterested in it as a whole. This is not to mention the changes to the Klingons and a general tone that I got that was very non-Trek in nature.

The Orville is more true to the legacy of Star Trek than this misfire.

Watching the pilot (or half a pilot since the second hour is only on CBS All Access in the US) this show just seems very much a Nu-Trek/Kelvin Timeline show. In some ways all the talk of this show being just prior to TOS and in the main timeline is like all the lies from the crew making the 2009 Nu-Trek movie when Trekkies correctly figured out early on that the new movie was an alternate universe.

Everything about it screams Nu-Trek/Kelvin Timeline to me: overall tech/ship design & usage (though some design and aesthetic changes are understandable), how the show is filmed (odd tilted camera angles at times), and how some of the characters act.

For example Sarek: in the original series Spock's joining Starfleet was a major reason for his and Sarek's (his father) rocky relationship and yet in ST:Discovery

Star Trek: Discovery also uses the Nu-Trek/Kelvin design for the Klingons (which always gets me thinking about the Enemy Mine aliens)

Another reason I'm thinking this new show is really part of the Nu-Trek/Kelvin alternate universe is ship choice. In the main timeline/universe Kirk gets command of the USS Enterprise NCC-1701 in 2264. The Enterprise was launched in 2245 (19 years before Kirk gets command). The events of the pilot "The Cage" (used for the flashback episodes "The Menagerie parts 1 & 2") "thirteen years before James T. Kirk takes command of the U.S.S. Enterprise" according to the ; approximately 2251. I'm not excluding the idea of any new ship designs, just that if this show was taking place in the main timeline/universe then there is no reason we shouldn't see any Constitution class ships (even the Enterprise under the command of Robert April or Christopher Pike) with ST:DSC taking place around 10 years before TOS.
Who knows what evil lurks in the hearts of men?

Having watched the first three episodes, I have really mixed feelings about Discovery. It took me a while to get into the right mindset during the first episode because the opening credits made me laugh my ass off. It has credits for twenty producers. TWENTY! Talk about too many cooks... Other distractions include the non-stop apeing of JJ's lens-flare abuse, the desperately forced attempts to give each character a memorable quirk, and the startling tonal shift into horror during episode 3. But, above all other concerns, is the fact that this is one character's story instead of an ensemble; that's the antithesis of what Trek is about.

Positives: the effects sequences are gorgeous. The opening two-parter has already given us more ship-to-ship combat than all three Kelvin movies combined. The gangly alien XO of the Discovery is a pretty interesting character. Episode 3 injected some much-needed mystery, intrigue, and sense of wonder (albeit dulled by the uncharacteristic moments of body horror).

Overall, this could turn out to be a decent SF series, but it has yet to offer up much of what I want from Star Trek. Instead of new life-forms or new civilisations, it's focusing on the most well known and clearly defined of all the franchise's antagonists. Attack of the Klingons is a place this franchise has gone many times before. I just hope Discovery will start to live up to its name.

If this was in the future (post-TNG/DS9/Voy etc) or a third time line I'd have basically no issues what so ever. What issues I have are the inconsistencies with the timeline with the presentation. Although the conversation reveal of the relationship between the engineer and doctor guy at the end of one of the episodes was awkward as hell. It's like the writers and director didn't know how to handle domestic scenes.

I've always thought Alex Kurtzman's television work was far stronger than his movie work (same goes for his frequent partner Roberto Orci). It would be interesting to find out what Fuller's vision for Star Trek: Discovery was, and how it differs from what was eventually delivered.
Who knows what evil lurks in the hearts of men?

This is one of those things they should have been doing all along. Star Trek belongs on TV, and it's good to see such an ambitious slate of TV projects aimed at more than one kind of audience.

Back in the beginning of February, Youtube channel Midnight's Edge released a video called "Star Trek Discovery: The Prime Deception – CBS and Paramount Viacom Rights Explained". The video looks at the history of Star Trek ownership to the present state and why the current Star Trek productions are significantly different from everything 1966-2005 (TOS, TNG, DS9, VOY, ENT, & the movies). In short, everything from the 2009 movie to the present is created under an alternate Star Trek license and is not a part of the original Star Trek (both the Kelvin universe of the movies and the "Prime" universe that Kelvin universe diverges from).

NSFW warning, in quoting some articles there are a couple-three instances of strong cuss words used.


Midnight's Edge also released a shortened version of the above video called "Why the Star Trek Prime Timeline is NOT Canon Explained" which I do not believe has the quoted cussing (they were in the longer ownership sections that are mostly trimmed in this version).