The Official MZ Doctor Who Thread!

Sutekh much later on has shown up in two different Faction Paradox series, and

My previous avatar was an ode to Faction Paradox, which I think is one of the more interesting Doctor Who spinoffs.

Ok, I'm getting off topic and will go back to work now...
Shonokin - http://www.scifijapan.com/articles/

Right now, the new Planet of the Dead is the only BR release. It's the only one shot HD.

The is a great site to keep track of what is coming in both the UK and then the US.
Robert - Cleveland, OH
(formerly mechascorpio)

Warning, there is a spoiler character in these pictures! 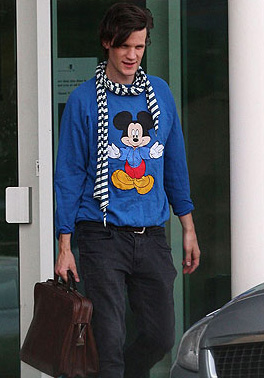 ^ Not the new outfit

"The universe is big. It’s vast and complicated and ridiculous. And sometimes, very rarely, impossible things just happen, and we call them miracles." -The 11th Doctor, The Pandorica Opens

WHy would they put both versions under Play All? They could have at least specified something beforehand. Oh well, nothing I can do about it now.

Okay, I'm confused on the specials then. Have the specials been released on DVD yet? I know Planet of the Dead is coming out to Blu-Ray and DVD next week, but what about the others before it? Like that The New Doctor one, and whatever the others are? BBC's site made it sound like The New Doctor was the latest, while Planet of the Dead was before that one.

So I've watched both Unearthly Child and The Daleks (isn't it prounounced Darleks though???), and I have to say, I do not like William's version of The Doctor. The episodes themselves are pretty good, but I find The Doctor to be so unfunny and boring that it makes them drag on (especially since The Daleks did not need to be 7 episodes). Oh yeah, and Ian cannot seem to make up his mind for a damn, as one minute he wants to go home, the next he is all brave, then he is suddenly scared, etc.

I found out Planet of the Dead is airing this Sunday, so I think I'm going to watch that before I buy it, since I kind of want to buy the Blu-Ray of Children of Earth since it is $15 with my employee discount (while PotD is $13).

Lastly, can you give me the episode titles/numbers for the first and last episode of each Doctor? I've decided those are what I want to start collecting first, so I can see the transitions between each Doctor and decide which ones I want to see more of first.

People definitely either Love or Hate "Love & Monsters". Personally I thought it was a hoot, but there were a lot of in-jokes in it for, towards and about old fans and the series itself. I'd rather watch it 10 times in a row than watch the one that followed, "Fear Her". Ugh.

Glad you liked "Planet of the Dead", I just thought it was kind of a missed opportunity (filmed on location in Dubai and casting Michelle Ryan -- one of the UKs biggest actresses -- and I found both sort of "eh").

We do not know anything about what/who is yet to come as hinted in PoD. BBC did announce a few things the other day (so maybe gave it away) about the finale to come, but it won't mean anything to you until you've watched Series 3 all the way through.

Although there is some flirtiness in Series 3, there is only one Rose, so they tame it down a lot.

BTW, I absolutely love "The Impossible Planet/The Satan Pit" and "Army of Ghosts/Doomsday". Cybermen are my favorite monster (always have been even in the old days), though the Daleks have really come back strong after years of almost being a joke. And "The Girl in the Fireplace" may still be my all time favorite episode. Though one you haven't seen, "Utopia", truly had me on the edge of my seat as an old fan.

Series 2 was just spectacular, and like you, I didn't think they could top Eccleston. And there are so many great developments to come for you in Series 3 and Series 4; you're still at the beginning of one long arc, and there is still so many really exciting, really sad, really funny and really creepy moments to come.

As much as I love the story of Series 1 and 2, there are still even better stories ahead. Series 3 starts a little slow, but by mid-season ("Human Nature") it's perfection. And Series 4 (leading up to where we are now) is very, very powerful and insanely out of control by the end (in a good way).

For fans of Daleks vs Cybermen: http://www.youtube.com/watch?v=AZ-lJpL2oVg