^ I think Dougherty tweeted something about it.

Giving the other heads impressive-sounding names only to bestow the third head with Kevin? I I think I remember something like that.

He jokingly said they were Ichi (One) Ni (Two) and Kevin, and the fandom has run wild with it.
Gills.

Thanks fellas! All of this (at least for me), just came out of left field, leaving me to wonder, what the heck are they using that name for this severed head? For me, I will just leave it as "the severed head"!

Realized I never put my two cents in here either. I enjoyed the heck out of the film. After my first viewing I was very much overly hyped about it. 10/10, Best evar! etc etc. But the more I thought on it, the more I mellowed. Honestly, I think it's going to end up as an average rated/ranked in my book. While I understand why some hate it, I don't find those elements offensive enough to knock it further. I found the characters watchable and entertaining even if they were just boilerplate, paint-by-numbers, characters. I never had a hard time following the monster action in this film but I will say that no matter what he does Michael Dougherty couldn't capture the same majestic feeling Edwards did when he filmed the monsters. It just feels like he was trying to make it more "cool" than majestic. And it really felt like he was throwing everything and the kitchen sink into the movie. Almost like this was the one and only chance to get these elements into the series before it ends. The Oxygen Destroyer, a form of Burning Godzilla, barely touched on world-wide monster mayhem. All he was missing was a form of Godzilla offspring, a mech, and an alien invasion to hit all the standard Godzilla tropes. It does make GvK's supposedly one-on-one brawl seem insignificant, like if the next F&F movie only used motocross bikes.

The "their radiation heals the world" came out of nowhere to me and took me out of the film. It happened at close to the mid point of the movie so I wasn't expecting such an important plot point to be pulled out thin air. If it was referenced in the exposition dump news cast or the Senate hearing at the front of the film I could have accepted it more.

Dr. Serizawa's sacrifice didn't seem needed to me. With how big the explosion was it seemed like they could have just set a timer on the nuke and dropped it where the sub was (or shot it out in the vehicle Serizawa was sent in) and had the same affect on Godzilla. I mean if it exploded and only took out the chamber Godzilla was chilling in, sure then I could see it needing to be point blank. But it destroyed all of "Atlantis", so I don't think being a mile (or less than by my impression of the distance) would make THAT much of a difference. So, let me put my tinfoil hat on, with Legendary being bought by the Chinese conglomerate Wanda and having killed off a fan favorite Japanese character played by a Japanese actor and having a Chinese actor in a bigger role in one of their other "franchises" it makes me suspicious of them killing off another fan favorite Japanese character played by a Japanese actor and having a Chinese actor playing a prominent role (technically two roles but one is less prominent but also acts as an Easter egg/fan service) yet again. Will Ken Watanabe be killed off and replaced again in the Detective Pikachu sequel? Sorry, I just like Ken and Serizawa and felt that his death was needless and motivated more by Chinese interests than improving the movie. I mean, we went from having Serizawa/Watanabe and Graham/Hawkins heading Monarch/this franchise to having Kyle Chandler and Millie Bobby Brown. I thought Kyle played Mark as best he could and his character is more watchable than Ford Brody, and I like Millie Bobby Brown but Madison didn't do a lot for the majority of the film (and sort of being in on the eco-terrorist thing muddles it all up). I don't think their characters can bring the same gravitas that Watanabe or Hawkins did to their roles, as minor as they were in both films.

Although I will say I am probably one of the few people that liked Bradley Whitford/Dr. Stanton. He's just one of those actors who I enjoy watching.

I feel like if there was someone who was over seeing the franchise as a whole (eg Marvel Studios Movies) and not installment to installment (eg DC movies) they might have reigned Dougherty in and created a bit more of a focused film that might have presented the characters and their motives better and might have had more room to check in on the other Titans and give the movie a more global feel. And it would have been nice to have some main locations that weren't just Monarch bases/vehicles.

The sound design is mostly great. Love that they brought Godzilla standard roar into the mix along with his new roar. Mothra sound pitch perfect but Ghidorah and Rodan are a tad lacking. There are moments (but not enough) when there's some elements that makes him sound a bit more unique than a modern generic dragon/monster roar. It's like they were afraid general audiences wouldn't like an updated version of his cackle so they hid it under so much mixing and other sounds that you can only really hear it once or twice and becomes more of an Easter egg than anything else. But Rodan just sounds like modern stock monster roar. Like if you put together a mix of modern monster roars, I'd have a hard time telling if it was Ghidorah, Rodan, or one of the Pacific Rim kaiju.

So yeah, in the long run this is just smack dab in the middle. An enjoyable and fun with more compelling characters than in the previous film, not horrendous, boring, or offensive but nowhere near top tier. 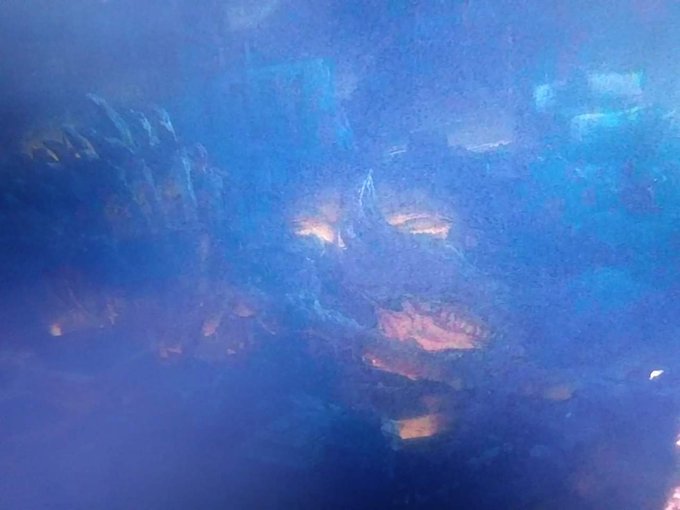 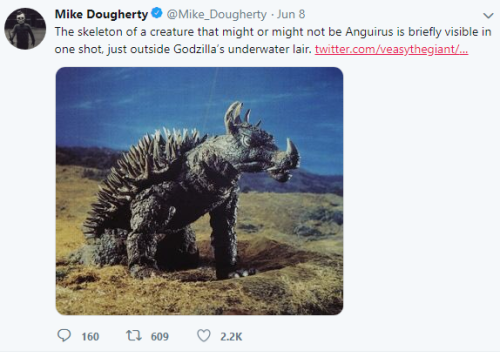 I'm reminded of how the body of Kameba that washes ashore in Godzilla: Tokyo SOS was originally going to be the body of Anguirus until Shogo Tomiyama objected because he knew that fans would be upset. I think the real problem there was that Anguirus hadn't made a film appearance since 1974 at that time and a quick cameo as a corpse would have been unbecoming. His return in Godzilla: Final Wars the following year was much more satisfying.

The undersea Anguirus skeleton in Godzilla: King of the Monsters seems less like the Kameba cameo and more like the Godzilla skeleton at the beginning of G'14. That Anguirus lived in ancient times. Maybe it was a Godzilla Raids Again situation with Godzilla and Anguirus fighting to the death in the heart of the city.

Dougherty said in an interview he wanted to use as many Toho monsters as possible but each one comes with its own price tag so they couldn't...so he probably just snuck in that because he wanted to use Anguirus where Scylla or Behemoth or Methusela are but couldn't.
Gills.

^ Agreed. I'm pretty sure, if allowed to, all those cameos would have been TOHO Kaiju rather than original creations, for good or ill. Despite all this however, I still really enjoy this film. It gave me exactly what I wanted/expected. No more, no less. In this day and age, that is a blessing.
There are no more good TV Shows, only ones that haven't disappointed me yet.

Here's my two cents, and I'll try to keep it short. My wife and I saw this twice and we pretty much loved it! I don't agree with many criticisms about the human characters being terrible, I thought they were fine and actually a lot more interesting than most of the characters from Godzilla (2014). My only complaint is the way they killed off Sally Hawkins. I didn't even notice that she died until I saw her death certificate as Dr Serizawa was mourning for her. At least they could've given her a more memorable death scene. Maybe she could've died in Serizawa's arms, telling him it was an honor working with him, or something. Her death was just so empty. Who knows, maybe she had a tight schedule and could only appear in a few scenes.

Regarding the monsters, they were all fantastic. My only complaint is that Ghidorah's awakening didn't have much of an impact. There was no real anticipation or fear of awakening him. One minute he was frozen in ice, and the next boom, he's awake and fighting Godzilla. Which was great btw!

I would say my biggest disappointment was at the very end when Vira Farmiga is driving around the city with Ghidorah destroying buildings around her left and right. I was rolling my eyes at that scene and thinking to myself, "Will you just die already??!"

That scene was just so unnecessary and dumb! Reminded me of the awful taxi chase from GINO (1998).

Some concept art has been released: 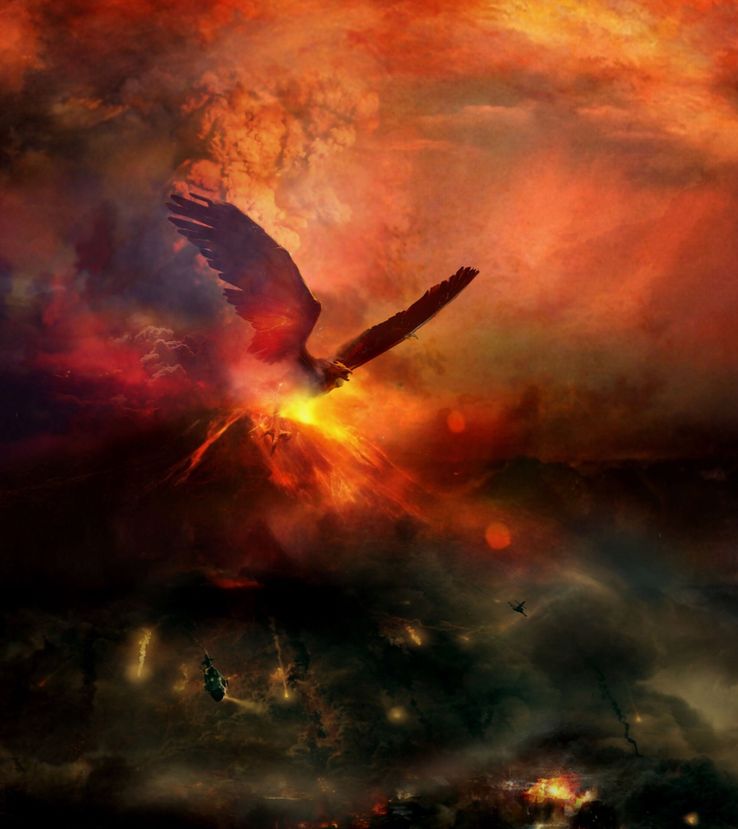 The "coronation" scene looks way better than the one we got, which was one of the dodgier CGI shots of the film.
I'm not a hero. I'm not a savior. Forget what you know.

That's exactly the theme I was hoping they'd tap into for this movie. I know it's nominally Kong's theme, but it worked very well for KG, too.

That guy does good stuff. I put one of his vids up in the video thread where he put the KOTM theme over Godzilla's landing in San Francisco from G14. It worked amazingly well.
I'm not a hero. I'm not a savior. Forget what you know.

Dougherty confirms the "if only the Earth and stones could speak-" line is a reference to a similar line Yuri says in GMK: