Not sure if any talk of this has started yet, couldn't find anything at first glance.

In July a new version of that book is coming out that instead covers all the Toho monsters (of course including all Godzilla monsters as well). It looks like an interesting buy, but just wondering how the former Ultra book was in terms of fan satisfaction.
J>E Translator. I like Japanese video games, giant monsters, and more. よろしくお願いします。

Hadn't heard back from a couple people that had it on order, so maybe this'll be a good bump

Where did you hear there would be a Toho one? I'd definitely pick it up.
Kaiju Transmissions Podcast- 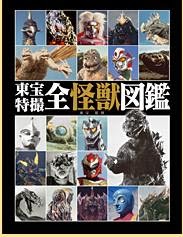 Interesting to see that a lot of Toho's sci fi television is featured on the cover (I see Rainbowman, Diamond Eye, Gransazers, Guyferd, etc). Looks like this might be the most comprehensive Toho monster encyclopedia to date if its going to cover that stuff as well. That definitely will give this an edge over some other books and I'm very interested.

I placed a pre-order on Amazon.jp. My total with shipping came out to $50 something, which I don't think is bad at all.
Kaiju Transmissions Podcast-

Can you post a link to that book on Amazon.jp?

I'm guessing this one will be much more expansive since its also covering Toho's television output (and also looking at how exhaustive their Tsuburaya book was).
Kaiju Transmissions Podcast-

For those of us that don't read/speak Japanese, would this book and the Tsubaraya one be interesting for the artwork or would it likely be underwhelming? Are all you other guys Japanese speakers?

I don't know a lick of Japanese so I can't help ya. I've just always been interested in the Japanese kaiju books, especially the monster encyclopedia types.

I don't have the Tsuburaya one either, but I know there are some scans from it floating around online.
Kaiju Transmissions Podcast-

If you go the thread linked in the second post of this current thread, you can see a few interior shots to give you an idea of what the Tsuburaya one looked like

Sci fi Japan has an article about this book.

Where would you order it to get the stickers and other bonuses?

I've already pre-ordered this bad boy. I *should* have more free time when this is released (now is the busiest part of the year for my job) to post some photos and a review, but I'm through making promises in that regard

However, the fact that it's being published by Shogakukan, which I considered to be best damn publisher of Godzilla books, means that I will have very high expectations for it, and this could have a chance to be one of the best Japanese G books in quite a while....hopefully it lives up to the hype.

Another book (or "Mook" I should say) is also coming out in July from Kodansha that has completely slipped under the radar:

There is no photo of the cover, and the price is rather high for a "Mook" at over 4000 yen ($40 +). I haven't pre-ordered it as I want to see it for myself in stores to decided if it's worth dropping that kind of $/¥ on it with the Shogakukan book already slated for release.

Please do a review! Its hard to find reviews for these kind of books and when you dont have access to flip through it at a bookstore, it's easy to end up with something that reprints stuff you already have.

I havent put in a preorder for this one simply because when the other Toho daikaju book was announced, i figured this book which is 100 pages shorter and covers considerably more monsters (from Toho television) might be pretty shallow.. I'm still intrigued by the idea of seeing the television monsters, so maybe i'll get it after all..but i'll probably wait to pick it up used from YAJ

Just seen this listed on E-Bay. One seller does a quick flip through and it would appear that this is a text-heavy book with what appears to be mainly small pics. If I see it in person(at a Chiller show, perhaps), my opinion may change, but for now, since I can't read Japanese, this looks like a pass.

Thanks for the heads up

Second, after looking at the publishing date, this is obviously not the book I thought it was. Sorry for spreading false info.

And in an effort to make amends, perhaps someone can find this useful...

Also picked this nice artbook up as well:

Looking forward to your thoughts, eburahsmeg. My pre order for the encyclopedia shipped a couple days ago.

I'm on the fence about the art book though, so I'm looking forward to hearing more about that one for sure.
Kaiju Transmissions Podcast-

Excuse the crappy "scans" as they're just photos taken with my iphone as I don't have a scanner.


This book is one of the more unique Godzilla-related books I’ve seen in quite some time, because unlike most G books (which only cover either the Godzilla series along with TOHO’s other daikaiju and special effects films), this book also focuses on rarely covered TOHO-related tokusatsu superhero television series.

Now, unlike a lot of fans, I’ve never been a fan of tokusatsu super hero shows. People often believe that just because I love Godzilla and daikaiju flicks, they automatically think there is a link to Ultraman, Kamen Rider, etc. and that I probably like them as well….Nope. No disrespect to those who like those shows...they're just not my cup of tea. However, what interests be greatly about this book is the coverage of tokusatsu shows which have some connection to Godzilla via daikaiju from those films making appearances and cameos. Also, Tsuburaya produced tokusatsu shows and the likes of Kamen Rider have been covered infinite times in countless books/magazines/etc., but very little material exists on TOHO related tokusatsu such as Zone Fighter/Godman/Green Man/etc. This book makes an effort to fill that void.

The first half of the book focuses on the usual series (G54-GFW and every daikaiju/special effects movie in between), and there’s nothing all that special or groundbreaking in terms of info or photos/stills we haven’t seen before (although they do include the most recent 2014 film in their coverage as well. Alot of the new recent books are inexplicably only covering films up to GFW with next to nothing on G2014, so major props to this book for not overlooking it

)….it’s a little vanilla to be honest compared to most Shogakukan books which are reknowned for their comprehensive photo spreads and stills on each Godzilla film.....it's not bad by any means, but nothing special (Shogakukan’s History of G: G54-99 still remains one of the best books in terms of interesting photos/stills of each film)...it's very streamlined, efficient, and straight to the point. An example are the two pages below devoted to GvsMonster Zero:

Have no fear, however, as the second half of the book is where it begins to shine as it's loaded with stills and photos from rare TOHO Tokusatsu TV shows. A lot of them I’m not all that familiar with (others one here probably know far more than I do in regards to these shows), but I’ll post some small samples of the 3 that interest me the most:

A sample spread of Go! Godman:

A sample spread of Zone Fighter:

There's even a small tid bit on the Godman/Greenman crossover from 2008 feature Gaira:

There are many other series that I'm not familiar with covered in this book(I'm sure many on here are far more knowledgable when it comes to tokusatsu shows), such as Guyferd, Saiba-Koppu, The Justirisers, Granseizar, SeizarX, quite frankly, they all run together in terms of style (Kamen Rider/Power Rangers clones) and I didn't find them all that interesting or original. Another is Kawaii Jenny (Bronies may like this one, haha

) . However, the most interesting looking one is Go! UshiWaka Kotaro which is a tokusatsu film set in fuedal Japan with Yokai-style demons and monsters instead of the usual robot super heros and what not. This looks very cool and seems like an interesting, original take on the tokusatsu. Anyone know anything more about it?

Overall, another steller work from Shogakukan that covers all the Godzilla and TOHO daikaiju/SFX films in a thorough manner while also tackling subject matters rarely explored in G-related books in the various TOHO tokusatsu films. I highly recommend it.

Thanks. That Gaira shot is a surreal.

I got my copy today. I can't add much to what ebirahsmeg has already said. Its a really dense encyclopedia, with every creature and mech chronicled. If you want a lot of pictures, you won't find them. That isn't a bad thing, its just that this thing is so jam packed that each character more or less only gets one or two images. The first half is feature films and the second half of the book is television, which is really interesting since it chronicles Toho sci-fi shows that are otherwise obscure (like Kawaii Jenny, Vampire Gigolo, Cybercops, etc)

Its really comprehensive, although there are some unusual absences. For example, there is an entry on the Legendary Godzilla film, but the 1998 film is nowhere to be found, not even a single blurb (and neither are the HB and Tristar cartoons). The most glaring omission from the TV half of the book is Megaloman. This is especially odd since Megaloman was on the pre-release cover art.

Other than that, pretty much everything pertaining to Toho effects films is accounted for in some way or another.
Kaiju Transmissions Podcast-