By comparing it to Mill Creek's Ultraman and Criterion's Godzilla sets it seems to indicate a home video release. Redman? Other Toho kaiju? - but, if you look at the replies you'll see a little angry emoji face from artist and Gamera superfan Sophie Campbell, whose work is included in the Criterion Godzilla set. I may be making something out of nothing, but I think that this is something to do with Gamera.

And while I'm here: Arrow is releasing Ring as a single release and as a box set with Rasen, Ring 2, and Ring 0!

I'm interested in the follow-ups, but will probably just go with the original.

I'm guessing it'll be Redman related Matt has been posting a lot of comic stuff related to Redman. Either that or that independent kaiju movie is getting a state side release, I forget the name of it but its the one that has the monster that looks like the loch ness monster I think it has "mist" in the title. I know he did a poster for it which is actually on display in Japan right now.

Getting back on topic boutique label Arrow is doing a release of An American Werewolf in London due out in October. I'll probably pick this up. It uses the same 4K master that Universal used for their reissued BD a few years ago as well as a ton of new special features and every other special feature made before for the DVD/BD releases.
The member formerly known as gvamp

^ That's Howl Beyond the Fog, and I feel that it is unlikely since it was supposed to premiere at G-Fest this year but wasn't finished. From what I read, the director showed footage, apologized the film still wasn't done, and said he'd be back the following year with the complete movie? Something like that.

Matt is still hard at work on his Redman comic (as far as I'm aware) so it makes sense to be posting Redman stuff... I just feel like he's hinting at something different. It's some new project that he can't talk about, why would he complained that with the Redman comic that's already available and well-known?

Redman home video release is a possibility, as is some other (possibly obscure) kaiju release Toho or otherwise, but I just have a feeling it's Gamera. Mill Creek's releases have been out of print for a little while now and are fetching outrageous prices, the Japanese studio now has done far better transfers, and it just feels like interest in kaiju movies is stronger than ever in the West.

- add to that Sophie Campbell posting a few comments about how Matt has got some new project that she really wishes she could have had and add her status as a huge Gamera fan, moreso than Godzilla, and it just feels really plausible for me.

Of course, maybe it's something that's kaiju adjacent that I would never think about!

now i hope that SF! can get alligator.
ROBOT CO-OP IS GAMING COMEDY
https://robotco-op.com/

New releases of the Showa Gamera movies would be great, especially if we can get Gammera the Invicible this time. The English dubs for the other movies would be welcome too. If MillCreek's Heisei releases could be improved upon, I'd double dip for them as well.
Who knows what evil lurks in the hearts of men?

Not trying to bring that discussion over into this thread too, but the Mill Creek Blu-rays of the Showa films didn't have any dubbed versions at all. It's a bit more inane for Gamera since all eight of those are movies for younger kids.

Legend Films is, I think, the company that brought us the nice HD transfer of Gammera that's on Amazon Prime. It would be wonderful to get that on disc but I don't expect it since I don't think that digital release was authorized by Kadokawa.

Didn't Matt do a manga based on the Heisei Gamera's backstory? I bet the trilogy is a better candidate for a steelbook or deluxe edition than the Showa films.
変の声謎だよ。
Save All Dubs

^ The were only provided dubs for some of the Showa Gamera films, so they decided to just askew the English dubs for uniformity (those were more like one of their value releases anyway, what with the substandard 1080i versions provided).

Admittedly I only got the Mill Creek Gamera Blu Rays because they were super inexpensive, I would have picked up extras if I knew once they were OOP they'd be worth quite a bit. The S!F DVD are s my go to for watching Showa Gamera. If Mill Creek though released a Blu Ray set that included Gammera The Invincible, and All the dubs, you can bet their would be people shouting from the rooftops declaring Mill Creek their new favorite and rejecting Criterion in an unbelievable turn of events.

Switching gears slightly, I could be wrong, but on the surface it would seem fairly easy at this point for Sony to release a combined Heisei/Millennium Godzilla Blu Ray set. They would have to negotiate with Toho ,Kraken, and Lionsgate to get RoG and Biollante, but I imagine it would be less red tape than what Criterion had to go through, and the advantage is that all those films have a Toho produced dub except 2000, which has already been made available on Blu Ray. Sure we would not get G1985, but by now we understand it's pretty much dependent on fans to keep alive. Much less content potential to disappoint fans involved with the 13 Heisei/Millennium films.
There are no more good TV Shows, only ones that haven't disappointed me yet.

Does Mill Creek even have the license to Gamera still?
The member formerly known as gvamp

Finally... a true first-class treatment for this horror classic from the fine folk at Arrow Video. Cannot wait! 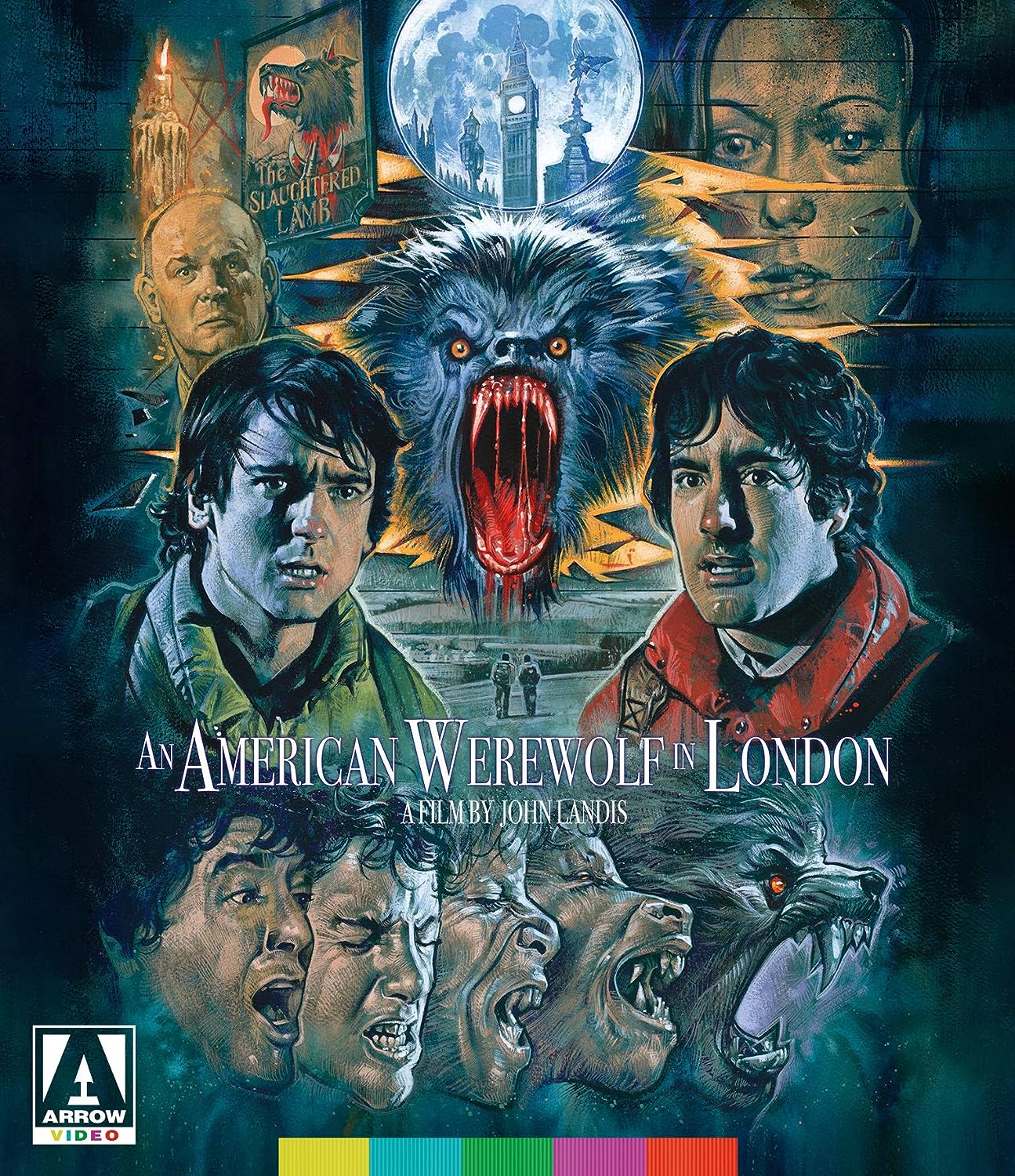 It's gonna be a good (and yes, expensive) October, kiddies!!!

I preordred that myself, it'll be my first Arrow release. I hear they do amazing stuff so I can't wait. Plus it'll be a nice upgrade to my Gen 1 BD of An American Werewolf of London. It would have been nice if it was a 4K release but I'm still glad we're getting it.

Also rumored for October is the last three MCU movies in 4K, those being Guardians of the Galaxy, Doctor Strange and Ant-man. Allegedly those are going to drop on October 1st.
The member formerly known as gvamp

Hmmmm... do I buy the special edition of American Werewolf and get the booklet and the poster and whatnot or do I wait a few months for a slimmer standard edition with just the disc?

I hope this means an eventual home media release of the Legend Films Gammera but I'm not holding my breath.
変の声謎だよ。
Save All Dubs

I wonder if that means the Gamera films will go off of Vudu?...they have been free to watch,(sans the original film) but not available to purchase, although they are sourced form the S!F releases.

A pristine copy of Gammera the Invincible on BRD would be amazing. For All the other AIP sourced films, there probably aren't good enough materials that exist to make HD versions, so I'll settle for the mediocre DVD collections I have. The S!F DVD's are good for all films except for the first two (With regard to English versions), but at least there is some preservation, no matter how faded, of the AIP edits and credit sequences for:

War of the Monsters
Return of the Giant Monsters
Destroy All Planets
Attack of the Monsters &
Gamera vs. Monster X
There are no more good TV Shows, only ones that haven't disappointed me yet.

Man it is so true, you get what you pay for. I have the Alpha Video DVD of WotM. But I had 2 other "El cheapo" Gamera sets. One from Allegro in 2012, and one from TGG Direct from 2013. Those prints of WotM are even worse. I'd love to see that one with the AIP logo in tact make its way to home media.

*edit*...Ok so these probably have been around for a long time, and I never noticed, but archive.org has most of these films available to stream & Download for free. They have a version of WotM with the AIP into intact, and what appears to be a newly video generated title sequence in the style of the original. I know many are not fans of this, but it looks pretty darn good IMHO.
There are no more good TV Shows, only ones that haven't disappointed me yet.