I feel Episode IX will make less than TLJ.

I'm surprised by just HOW poorly Solo did, but I figure we're on a general decline of Star Wars box office until it sorta levels out somewhere just south of $1B per movie. But to me, that would have happened no matter what. Good movies or bad. Alienating or all-inclusive.

Even as someone who has been unimpressed with Star Wars since 1983, and feels like TLJ was sorta the final straw for me personally (I walked in excited and walked out mostly just BORED and exhausted and disinterested), I don't think things are as doom-and-gloom as some of the naysayers are claiming.
Gills.

I've heard a variety of takes on this. Unfortunately the reasons (whether true or not), seem to support the results.

Rogue One Literally had no recognizable characters from previous films aside from a couple short scenes with Vader, CG Tarkin, and one scene with CG Leia. However the movie was fairly well received. I know some opinions were mixed, but personally I really liked Rogue One. For all my rantings about Disney eliminating the EU. Rogue One was , essentially, the perfect EU novel realized in film format. AND it made 1 Billion WW.

TLJ made 1.3 Billion, but still was obviously divisive, and I hate to say it, and as much as most people want to deny it, you have to think that a portion of Solo's less than stellar performance is directly tied to fallout from TLJ. I mean I wish we could live in an alternate dimension where Solo came out before TLJ, and see the box office improve, but unfortunately we cant do that. I still think that pushing the release to December might have helped a little, but who knows.

All I do know is that the argument that "If a spinoff film about one of the most popular characters (Han Solo) doesn't get people to theaters, what chance does Boba Fett, or Obi-Wan have?" Holds no weight with me, when in 2016 we had a spinoff film with arguably NO previously known characters be extremely successful.
There are no more good TV Shows, only ones that haven't disappointed me yet.

Again, just anecdotal evidence, but it seems like a lot of people I know, who weren't following the movie since it's announcement, weren't really aware Solo came out. You have 3 movies release in December and then suddenly you have a movie who starts their media push just a few months before release instead of trickling teasers out for over a year. So, to me, it seems like many people saw Star Wars and though "That'll be cool to see this winter".

^ Yes. A few people I know had the movie entirely pass them by.

A thought had just occurred. Now that they are putting a halt (at least temporally, they say) on stand alones, that cameo in "Solo" makes it even more pointless, especially if eventually do decide to discontinue that story. Perhaps they will release a "Special Edition" and eliminate that cameo all together!

It's hard to point to any one reason...as it's a combination of a lot of reasons:
-TLJ's somewhat lukewarm reception (this IS a real thing, whether people want to admit it, or whether it SHOULD have been a real thing...the reception was not as universally positive of TFA or RO)
-Recasting an iconic role (yes, this has been done before in this franchise...multiple times...but this isn't some character who died in the first movie then only came back as a ghost, or a hologram from the second movie that came back as a person later, or a cyborg wizard robot man with no face who was portrayed as his younger human self...it's one of the MAIN HUMAN CHARACTERS of the TRILOGY who's in EVERY movie. It's a tougher pill to swallow. Not impossible. Just tougher.)
-Lack of any real motive or agenda to the story (it was hard to tell what this was ABOUT from the trailers. TFA from trailers was about the war between good and evil kicking back into gear after a long period of inactivity; RO was about the Death Star heist; TLJ was about Rey training and her relationship with Kylo growing...Solo was about....Han Solo? Space tentacles? It didn't have an identifiable plot)
-Poor marketing (this has been mentioned a lot)
-Poor BTS word-of-mouth (Firing ANOTHER director, multiple reshoots...these don't matter a lot to the general populace, but they do to the more initiated viewer and are a factor)
-Some SW fatigue with it being the second one in six months...and the previous one being one people were still talking about because it was somewhat controversial
-The shifted release date

And it'll be interesting to see whether all these rumors about 'panic' behind the scenes at LucasFilm are true, and if they massively shift gears and all this...but as of right now, I take that as rumors. Rumors which WILL swirl as we've got quite a while until our next SW installment (thankfully).
Disney hasn't been as bad as some studios in terms of learning the wrong lessons from their failures and successes...but then again, Disney does allow their subsidiaries (Pixar, Marvel) to kind of govern themselves, so if LucasFilm is as dumb as they've seemed so far...then yeah, they're gonna learn a lot of wrong lessons here.
Gills.

if ep9 does not bring home the bacon i would say yes.
ROBOT CO-OP IS GAMING COMEDY
https://robotco-op.com/

Ep 9 is going to be interesting because there are two ways they can go with it:

1. Give in to the toxic Star Wars community and retcon a lot of "OH GODZILLA! WHAT TERRIBLE LANGUAGE!" they didn't like from TLJ, diminishing the film's achievements.

2. Tell the community to "OH GODZILLA! WHAT TERRIBLE LANGUAGE!" off and continue doing their own thing for the enjoyment of the rest of the world.

I'm hoping for #2, but I wouldn't be surprised if Abrahms gives in to #1's peer pressure. Of course, even if they did #1, the community would still find something to hate about the movie as most were ready to hate the films the moment Disney acquired Lucas Film. I still remember when we were at out first viewing of Rogue One in theaters two guys sat next to us spouting how they couldn't wait to get home after the movie to tear it apart on their SW blog. The movie hadn't even started yet and they already hated it.

My idea for those trying to remake (?) The Last Jedi: just adapt the classic fantasy novel The Last Unicorn and replace the unicorn with Jedi. 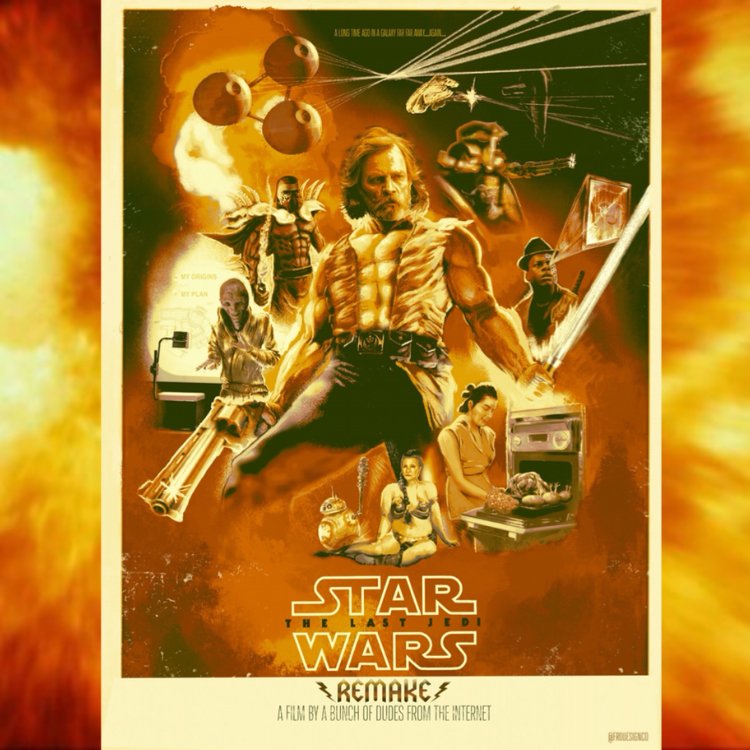 ^Snoke's old schoolroom projector is my favorite part of that.

That ties into another discussion we've had basically, of how SDCC isn't as big a deal anymore. The nerd fandom thinks it's this huge driving force and studios are (and should be) catering to them...but the reality is it's the general popcorn muncher who needs to be appealed to because they're the driving factor for success/failure.
Gills.

probably in a leadership role for the resistance.
ROBOT CO-OP IS GAMING COMEDY
https://robotco-op.com/

On Rogue One, I'll add:
There may not have been familiarity with the characters, but it was all about the Death Star, Darth Vader was in it, the Imperial March was used - these things were all in the trailers.
In terms of Star Wars iconography familiarity...it doesn't get much more recognizable than that, and those are BIG things for people to latch onto.

So to say "Oh general audiences had no familiarity with it," is a misrepresentation of how the movie was marketed.
Gills.

When Rogue One came out I assumed Disney made the movie just so they'd have a movie with Darth Vadar in it under their banner.

So, it seems that they'll be including Carrie Fisher in Episode IX by way of unused footage shot for Episode VII. This seems like the best option available. It'll be interesting to see how they incorporate it.
Tokyo, a smoldering memorial to the unknown, an unknown which at this very moment still prevails and could at any time lash out with its terrible destruction anywhere else in the world.