PLEASE NOTE: All articles are the property of the authors and/or SciFi Japan. Reprint or reproduction of any material in part or in whole, including the copying or posting
of articles on any internet or computer site, without the authors' consent is strictly forbidden. Links to articles appearing on SciFi Japan are allowed (and appreciated). 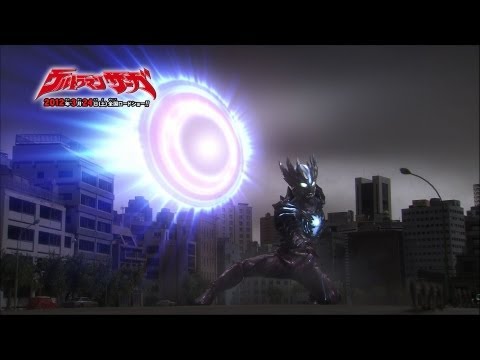 Hisashiburi, Ultraman fans! On Friday I went to a press screening of the latest Ultraman movie ULTRAMAN SAGA (Urutoraman Saaga, 2012) with my good friends Takeshi Yagi (director/producer of ULTRAMAN MAX, SUPERIOR ULTRAMAN 8 BROTHERS) and JR Lipartito (my colleague at GaijinChannel.com). “New Ultraman Day” only comes once a year, and it was great to enjoy the new film with like-minded fans for a change (followed by copious drinking and drunken phone calls to other Ultraman directors.)

As I’ve been very preoccupied with work this past year I’ve been out-of-the-loop with fandom and hadn’t had a chance to follow any of the news surrounding ULTRAMAN SAGA, so for the first time since 2004’s ULTRAMAN: THE NEXT I was able to go into a new Ultraman movie with no real preconceptions and no idea of what to expect, which was admittedly a very nice change.

Before I begin my review, it’s worth noting that ULTRAMAN SAGA will be released in theaters in both 2D and 3D – the 3D version having been filmed utilizing true a 3D camera – and the press screening we were shown at Shochiku was the 2D version.

ULTRAMAN SAGA opens with a powerful apocalyptic vision of Tokyo, buildings destroyed and the city seemingly devoid of life. We are soon introduced to the Earth Defense Force (EDF), Team U, played by members of the female idol group AKB48. They and a group of young children and the last survivors on planet Earth after the world was invaded by the evil Alien Bat, the rest of the human population having been abducted.

In another universe, Ultraman Zero receives a distress call and proceeds towards the Earth in aid. From yet another universe, that from which Ultraman Dyna disappeared through black hole 15 years ago, a young defense team pilot named Taiga is trapped in the ship of an invading alien force, who quickly disappear to another dimension.

Taiga soon finds himself in another world, in the apocalyptic version of Tokyo, as Ultraman Zero battles a huge fleet of alien spaceships. As Taiga notices a crashing ship heading straight towards a young boy, he pilots his ship directly into its path in an act of self-sacrifice. Witnessing his brave actions, Ultraman Zero rescues Taiga and joins with him.

Taiga soon encounters Ultraman Cosmos and his human host Musashi, along with Team U and the children. He and Musashi learn that Ultraman Dyna and his human host Asuka had once stayed with the team and protected them, but that was lost in battle with the alien Zetton. It is now up to Taiga and Musashi to protect the survivors. However, Taiga is not so happy to be joined with Ultraman Zero, and has no intention of fighting…

Overall, I’m afraid to say ULTRAMAN SAGA was a huge disappointment for me. The story is filled with lots of interesting and original ideas, but unfortunately the film fails to capitalize on almost all of them. For one, it is revealed that the girls in Team U are not actually professional members, but civilian survivors simply pretending for the sake of the children. This is an intriguing idea that they could have played with and explored a lot, but ultimately nothing happens with it. Another example is the fascinating idea that an Ultraman host rejects his connection with Ultraman and refuses to transform, but once again this is not explored in any real depth, and when the character’s ultimate decision to transform came it just felt lackluster. This felt like a truly wasted opportunity.

The film’s strongest performance I felt was delivered by Takeshi Tsuruno playing Shin Asuka, host to Ultraman Dyna. The multi-talented actor/musician/TV personality has a natural energy that is and always has been a joy to watch. Despite being absent for much of the film, whenever Tsuruno was onscreen his talent really shone through.

Taiyo Sugiura who plays Musashi Haruno, host of Ultraman Cosmos, had never particularly impressed me in the ULTRAMAN COSMOS (Urutoraman Kosumosu, 2001) TV series and related feature films, but I was quite surprised with his performance here and felt he had definitely grown as an actor since we last saw Musashi.

AKB48’s Sayaka Akimoto as Team U leader Anna was also a surprise for me. Although the film seems careful with the material it offers her – never pushed too far for anything particularly dramatic – I felt she coped well with what she was given and put in a fairly solid performance.

Anna (Sayaka Akimoto) is the leader of Team U, protecting a group of young children. © 2012 Ultraman Saga Film Partners

Unfortunately, I felt the rest of the cast fell quite short of the mark. The biggest disappointment for me was singer-songwriter DAIGO, in the lead role as Ultraman Zero’s new host Nozomu Taiga, whom I generally found to be very unlikable. He did not seem strong enough to grasp some of the role’s more demanding parts, with most of the more emotionally-charged scenes being overplayed too far, to the point where it often became difficult to differentiate between the character’s dramatic and comedic moments. As a result it was very hard to like or feel anything for this character, and as the lead I felt this really brought down the film as a whole quite a notch.

The rest of the Team U members were poorly defined and ultimately forgettable, their performances ranging from mediocre to plain bad. Furthermore, their backstory as a group of street-smart teen rebels not only seemed unnecessary, but it led to some really embarrassing stereotypes of that were already outdated in the 90s.

All the children are just stock characters whose sole purpose is to look happy or sad at the appropriate occasion. The one exception is the young boy Takeshi, who has grown despondent after the disappearance of Ultraman Dyna, apparently turning him into a mute and offering the child only about 3 lines of dialogue in the whole movie. The children all serve an incredibly loose purpose to the story, to the point where I felt they could have been written out entirely and you would have almost exactly the same movie. They weren’t outrageously bad, just totally pointless. The notion appears to be that children want to see other children in these movies, but in reality I’m sure most are just coming to see the heroes.

After the last two Ultraman outings realized their worlds almost entirely in CGI, ULTRAMAN SAGA returns us to the traditional miniature sets of Ultraman past. And a superb return it is! The film marks the debut of Special Effects Director Toshio Miike, former Art Director on Shusuke Kaneko’s Gamera trilogy, and his work truly shines through as the highlight of the whole movie.

The sets and miniatures are beautifully detailed, and are shot in a variety of interesting and original ways. The first appearance of Ultraman Dyna at the start of the movie is an early example of Miike’s incredible talent; teasing glimpses of the hero are seen through the interior windows of building, followed by his reflection in the mirrored glass of a nearby skyscraper, culminating in a powerful low-angle shot looking up at Dyna from street-level.

Some of shots do seem to have been composed specifically for the 3D effect, and although I am not a great fan of the current 3D fad, I am tempted to see the movie again in 3D simply to enjoy Miike’s work as it was intended.

Meanwhile, the film’s music score from composer Fumio Hara was serviceable, but unlike previous films I didn’t find it particularly memorable, with no strong themes that I can recall. I have always found them music to be a very important element to the Ultraman series, so this was rather disappointing for me.

The film attempts to inject more overt comedy elements compared to recent movies, but most of these gags I found fell flat. I believe comedy to be an essential part of Ultraman, and has been since the original series. However, the problem with ULTRAMAN SAGA is that the comedy moments are often executed poorly, with actors who are unable to handle the material. One particular scene, in which Taiga and the young boy Takeshi are running on the monster Gubira’s drill nose like a treadmill while being tossed in the air like pancakes, was just embarrassing to watch; I almost expected the “Benny Hill” theme song to start playing. The rest the time we’re just treated “funny” scenes such as the Team U girls making their robot vehicles dance, which I just find to be the laziest kind of humor. While I’m sure it will make the 5 year-olds laugh, anyone older will probably just be rolling their eyes.

Unlike other genre shows, Ultraman’s greatest strength has always been its ability to appeal to audiences of all ages, which is an area where I think this film fails. It rigidly targets a very juvenile sense of humor and runs the risk of alienating the rest of its audience.

The appearance of the titular character Ultraman Saga, making his debut in the movie, was also something of an anticlimax. Simply from the film’s title, as well as the excess of publicity images and trailers, the audience is already fully aware Ultraman Saga will be making his first appearance in the movie. Consequently, that appearance no longer holds any real value or surprise, so it is up to the filmmakers to utilize this knowledge and develop the story accordingly.

In the last movie, ULTRAMAN ZERO: THE REVENGE OF BELIAL (Urutoraman Zero THE MOVIE Chou Kessen! Beriaru Ginga Teikoku, 2010), the arrival of Ultraman Noa was neatly foreshadowed through the legend of Noa and the young boy Nao’s quest to return the Shield of Varaji. This was simple yet effective, Ultraman Noa’s ultimate appearance becoming a natural progression of the story.

In ULTRAMAN SAGA we have a trio of “wandering” Ultramen from different dimensions, one of whom does not wish to become an Ultraman, brought together in one world, laying the foundations for something that could have been incredibly fascinating to explore. Yet the story fails takes advantage of its own potential, Ultraman Saga instead relegated to becoming another mere, unexplained power-up when the trio find themselves in a pinch.

As a fan I’m probably more forgiving of these films’ faults than most, but ULTRAMAN SAGA ultimately failed to engage me. The greatest disappointment for me is that I know the staff are capable of producing something so much better – as they have time and again – and this film just feels like a wasted opportunity.

Those just looking for fun fights and cool special effects will probably enjoy the film, but those looking for anything more will likely be highly disappointed.

Since ULTRAMAN MEBIUS & ULTRAMAN BROTHERS (Urutoraman Mebiusu & Urutora Kyoudai) in 2006, we’ve been subject to an increasingly convoluted world which attempts to bring all the Ultraman characters into a singular narrative. This is really brought to the tipping point in ULTRAMAN SAGA in which characters from three different dimensions collide in a fourth, while at the same time attempting to provide resolution to storylines from 15 years ago, which can only bring confusion to general audiences. My personal feeling is that this story has really run its course, and it’s really time to clean the slate and have something completely different next year.